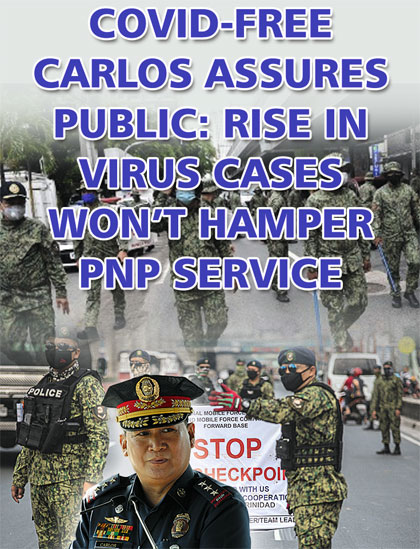 NOW back to full work after a bout with COVID-19, the country’s top cop yesterday assured the public anew that the rise in the number of police personnel affected by the virus won’t hamper their peacekeeping duties especially the strict enforcement of the nationwide gun ban and the minimum health safety measures to prevent the further spread of the disease.

General Dionardo B. Carlos made the renewed assurance amid the recent spike in COVID-19 cases in the 225,000-strong force. Last Saturday, another 390 Philippine National Police (PNP) personnel were reported to have contracted COVID-19 as the PNP leadership announced that all their Camp Crame-based quarantine and isolation facilities are already 100 percent fully occupied by infected personnel.

The PNP Health Service said it is also monitoring more than 4,000 ‘active cases’ to date. Since March last year, 125 police personnel have died after getting the virus while more than 41,000 out of the over 45,000 who contracted COVID-19 are already fully recovered and back to full duty status.

PNP Deputy Chief for Administration and the concurrent chair of the Administrative Support for COVID-19 Task Force, Lieutenant Gen. Joselito M. Vera Cruz said that as of 6 a.m. last Friday, all their isolation facilities in Camp Crame were in full capacity.

“Based on the data of our Health Service, the 287 rooms in Kiangan Emergency Treatment Facility and other facilities were fully occupied but we can still accommodate thru room sharing especially for families who got infected. Others will now be transferred to other isolation facilities within NCR, both PNP, and LGU-owned,” Vera Cruz explained.

The official added that the PNP is still waiting for the formal guidelines of the Department of Health (DOH) on shortened isolation period to decongest the facilities.

Carlos earlier ordered an expansion of their quarantine facilities inside Camp Crame and in the different Regional Police Offices to cater more personnel and their dependents infected with the virus..

The PNP already allows its personnel to go on home isolation following the health protocols with the condition that they must submit a regular report of their medical condition to the monitoring medical team.

“Thankfully, many of the COVID cases among our police personnel developed mild symptoms which will only need home or facility isolation,” he said.

The number of daily cases in the PNP reflects the increasing figures in the national level although the PNP chief assured the citizenry that the performance of their duties will not be affected.

“We have our deployment strategy that in case a member of the police unit will be isolated, those who are not in contact with him/her will take over. Of course, swab testing is a regular thing for us,” the top cop said.

According to the PNP chief, the work continues also for those who are asymptomatic and can still manage to discharge their function even at home or inside a facility.

More policemen are being added to the list of those who have caught the virus every day as police continue to be exposed to the disease while they strictly enforce government quarantine rules and regulations nationwide to prevent the further spread of the virus and its more deadly variants.

Police for the first time are also enforcing a nationwide gun ban under the new normal prompting Carlos to order his men to fully exercise caution in dealing with the public and strictly comply with minimum public health safety protocols specifically the mandatory wearing of face masks at all times and frequent washing of hands.

Last week, a total of 188 members of the PNP Headquarters Support Service, better known as Camp Crame based policemen were reported to have contracted COVID-19 so far this year and are undergoing quarantine.

Colonel Clifford B. Gairanod, PNP-HSS director, got the virus two weeks ago but has been cleared for work by PNP doctors after undergoing full quarantine.

Officers and men of the PNP-HSS are regularly exposed to the virus since they are always in contact with Camp Crame personnel, guests and other visitors round-the-clock. The base policemen are the ones tasked to ensure 24/7 security inside and outside the camp while enforcing all camp rules and regulations to the letter.

Dozens of PNP-HSS officers and men contracted the virus while building the facilities in 2021.

Two weeks ago, Carlos ordered the opening of more quarantine facilities and beds inside Camp Crame to cater to the growing number of police personnel being infected with COVID-19.

So far, 80 beds were put up at the PNP Training Service facility while another 100 beds were placed at the PNP Badminton Court to fully accommodate the COVID-stricken police personnel.

“We are adding more quarantine beds as a proactive measure just in case there will be more personnel who will need to undergo quarantine,” Gen. Carlos said.

Carlos also urged his men to get their booster jabs as the National Vaccination Program took to a higher level amid the spike in COVID-19 cases since last Christmas Day.

The top cop last year completed his Sinovac vaccines and was preparing for his booster shot when he got the virus.

Carlos said they understand the hesitation of a handful of personnel who do not wish to get vaccinated. “But the surge in the daily COVID-19 cases should serve as a lesson for everyone that there is a pressing need to protect ourselves from the severe effects of the virus,” he said.

“Police are considered as frontliners in the government’s COVID response because their duty puts them in direct interaction with people while securing the peace and order in every community. We don’t want to have sick law enforcers for it can affect their performance,” Carlos said.