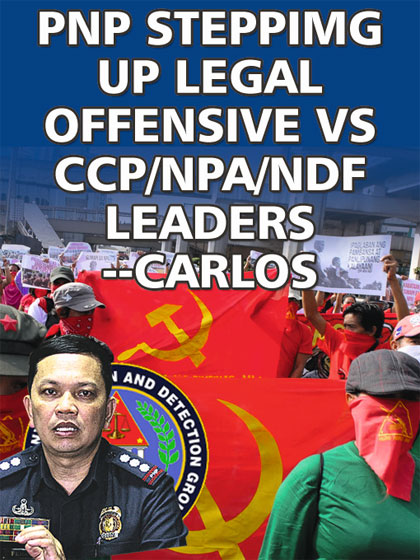 PHILIPPINE National Police (PNP) chief, General Dionardo B. Carlos yesterday said they are stepping up their legal offensive versus leaders and members of the Communist Party of the Philippines and its armed wing, the New People’s Army which have been accused of violation of international human rights law and the Anti-Terrorism Act of 2020.

The top cop said that as soon as warrants of arrest are issued against the accused by the court, they will see to it that the suspects would be arrested and face the criminal charges against them.

However, he also renewed the PNP’s call for members and supporters of the CPP/NPA/NDF to yield to the government with their weapons in order for them to avail of a comprehensive livelihood package that will allow them to return to the mainstream of the society and feed their families in line with the government’s effort to put an end to the more than five-decades old communist armed conflict.

Latest to be charged by the PNP-CIDG for violation of the anti-terror act and crimes against were self-exiled Communist Party of the Philippines (CPP) chairman Jose Maria Sison and nine suspected NPA rebels accused of involvement in separate attacks on mining sites in Isabela on October 28, 2015.

Ferro said that Joma Sison and his co-accused were charged before the Isabela Provincial Prosecutor’s Office in Ilagan City for violation of Republic Act 9851 or the Philippine Act on Crime Against International Humanitarian Law, Genocide, and Other Crimes Against Humanity and RA 11479 or the Anti-Terrorism Act of 2020.

Ferro said that suspects were charged for their involvement in the October 2015 attack on the mining sites of ASD Corporation and Nickel Asia Geogen Corporation in Barangay Dimaluade in Dinapigue, Isabela.

Around 7 a.m. of that day, an estimated 80 heavily-armed NPA guerrillas stormed the two mining sites, stripped the security guards of their weapons before burning an estimated P186 million worth of heavy equipment, service vehicles and bunkhouses in the two areas.

“The investigation showed the motive behind the attack was extortion,” said Ferro.

Ferro said the Isabela attack is among the 1,672 records of NPA attacks turned over by the Armed Forces of the Philippines Center for Law of Armed Conflict (AFPCLOAC) for investigation by the CIDG.

“The NTF-ELCAC is never only about military operations. It is largely about addressing the root causes of insurgencies and armed conflict by prioritizing and harmonizing the delivery of the government’s basic services and social development. Bringing justice to victims of terrorists through the rule of law is part of our many efforts,” the PNP-CIDG director said in explaining the reason behind the filing of criminal charges versus Joma et al.

The PNP-CIDG is also investigating at least 1,672 cases of purported human rights violations committed by the NPA from 2010 to date.

These include alleged incidents of the CPP-NPA-NDF’s use of child soldiers, destruction of civilian properties, use of anti-personnel mines, willful killings, and other International Human Rights Law violations that were monitored by the AFP in the countryside since 2010.

Last June, the government condemned the NPA’s use of a landmine that killed national football team and FEU varsity player Keith Absalon,21; and his cousin Nolven,34, in Masbate City.

The local NPA movement took full responsibility for the death of the two.

The Armed Forces of the Philippines Center for Law of Armed Conflict headed by Brigadier Gen. Joel Nacnac forwarded the documents to the PNP-CIDG. In turn, the PNP leadership ordered the CIDG to expedite the review of all the documents turned over by the AFP which are all related to the CPP-NPA-NDF’s violations of the International Humanitarian Law.

The PNP-CIDG also filed several cases against Joma Sison for the recruitment of minors for its armed wing—which, according to the cases it filed, usually starts with the recruitment of students to join its legal front organizations.

Carlos said full coordination among all concerned government agencies is crucial in their effort to put an end to the more than five decades of violence, extortion and other criminal and terroristic activities of the CPP-NPA-NDF in the country.

The cases being studied by the PNP include 560 incidents of Children in Armed Conflict, 542 cases of Destruction of Civilian Properties, 254 cases of Usage of Anti-Personnel Mines (land mines), 309 cases of Willful Killings, and seven other violations.

Ferro assured the AFP that they will seek the truth in all 1,672 cases and file appropriate criminal charges against the rebel personalities involved in those incidents.

Prior to this, from August to October 2021, 17 cases were already filed by CIDG against 128 identified CPP/NPA respondents.

The cases filed include violations of Article 270 of the Revised Penal Code or RPC (Kidnapping and Failure to Return a Minor), Republic Act 9851 (Philippine Act on Crimes Against International Humanitarian Law, Genocide and other Crimes Against Humanity), RA 9208 as amended by RA 10364 (Expanded Anti Trafficking in Person Act of 2012), RA 11188 (Special Protection of Children in Situation of Armed Conflict Act), RA 7610 (Special Protection of Children against Abuse, Exploitation and Discrimination Act), murder and frustrated murder.