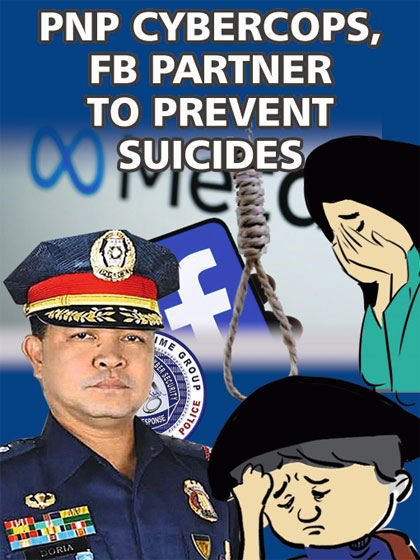 CYBERCOPS from the Philippine National Police Anti-Cybercrime Group (PNP-ACG) have prevented a number of suicides in the country with the help of Facebook, now known internationally as Meta.

The Journal Group learned that Facebook previously trained an algorithm to recognize posts that might signal suicide risk and gave users a way to flag post. As a result, Facebook teams review these posts and contact local authorities to do ‘wellness checks’ if a user seems at imminent risk.

There have been several recorded incidents in which PNP-ACG units which are on 24-hour duty have been alerted on ‘potential suicides’ in many parts of the country, said PNP-ACG director, Brigadier General Joel B. Doria.

As soon as Facebook contacts concerned ACG regional or provincial units, officers-on-duty immediately contact the nearest police station to inform them of their findings.

“Several lives have been saved because of our partnership with Facebook,” Brig. Gen. Doria told the Journal Group.

The PNP-ACG Operations Management Division headed by Colonel Domingo D. Soriano said they have literally saved a number of people who have showed signs of taking their life since the start of the pandemic brought about by the COVID-19 virus.

In one case recorded in Metro Manila, a distraught government employee sought the assistance of the PNP-ACG in looking for his ‘missing son’ late this year, Brig. Gen. Doria said.

It turned out that the young man left their home one morning on board his motorcycle and had failed to return since then. The parents, close relatives and friends of the missing man became worried when he refused to reply to their text messages and phone calls.

The man’s parents eventually found a letter he left in his room telling them not to look for him anymore because he will eventually commit suicide.

The man who was reportedly suffering from depression was found to have been addicted to online gambling too.

With the help of the Facebook, the cybercops managed to locate the whereabouts of the young man thru his IP address, location and other significant information found in his account.

The man’s Facebook account revealed the accurate location of his mobile device. Wasting no time, a team of PNP-ACG officers went to a small hotel in Metro Manila where they found the young man with the assistance of the hotel staff.

The man and his parents have been reunited.

Brig. Gen. Doria said similar incidents of would-be suicide that have been recorded outside the metropolis have been thwarted with the immediate response of concerned PNP-ACG field offices and local police territorial units.

He agreed that one of the best ways to help prevent a suicide is for people in distress to hear from others who care about them. In their case, the member of PNP Academy Class 1992 said they have really prevented some people who have the bad thought of taking their own lives by reaching out to them in time.

“Times are really difficult right now and we thank and pray that thru the active involvement of our units and with the help of Facebook, we can really help prevent would-be suicides,” the official said.

Over the past few years, there have been a number of people abroad who have video recorded their attempt to kill themselves.

In 2020, foreign news organizations reported that 16 people committed suicide after sharing their suicidal intention on Facebook while three others streamed their suicide on Facebook.

One of the three was a 33-year-old American man who fatally shot himself under the chin during a Facebook livestream which went viral.

This prompted Facebook to find a way to connect people in distress with people who can offer support online. The giant online social media and social networking service is known for contacting local emergency services immediately as soon as its staff detects a potential suicide, particularly a user who posts about self-harm.