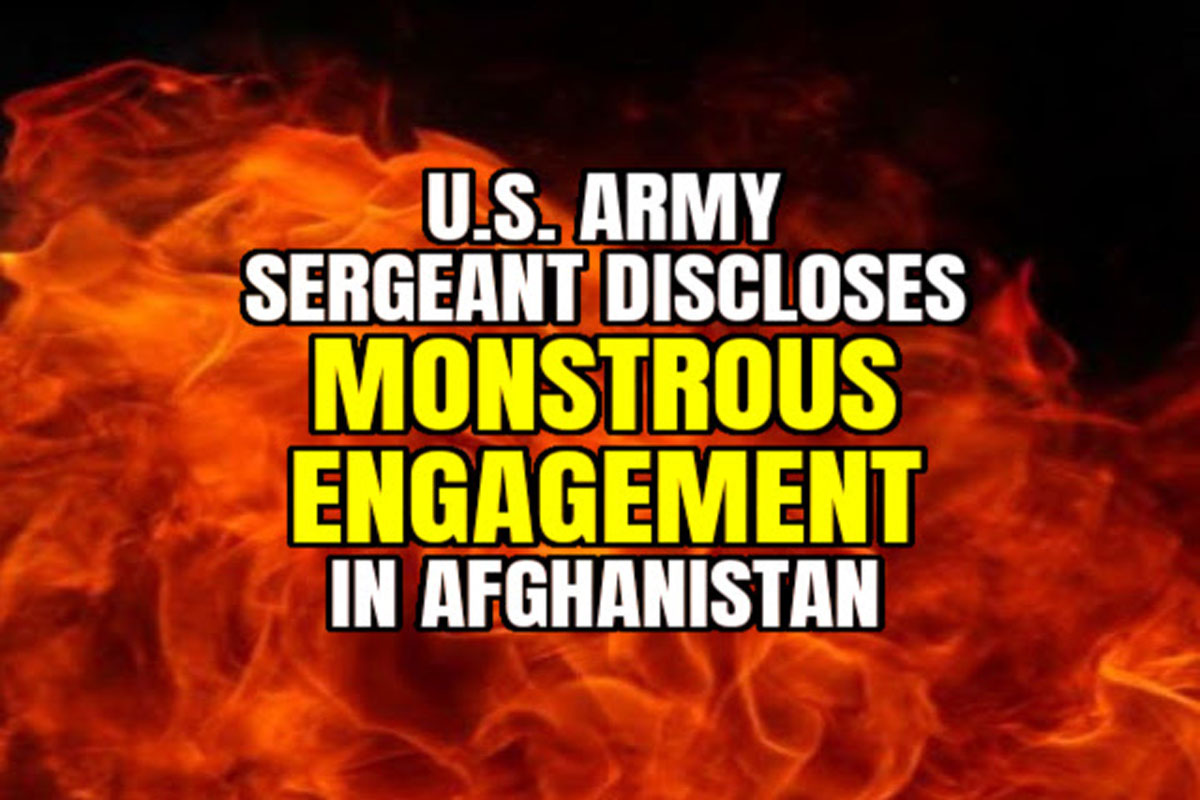 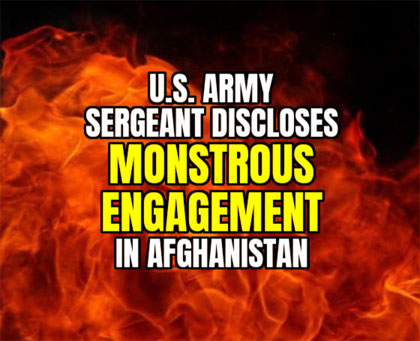 Were there actual monstrous creatures roaming the battlefields of Afghanistan? Or could these be manifestations by spiritual or non-terrestrial forces? Your thoughts.

The following account was forwarded to me a while back:

“I am a member of The United States Army, and I have a personal experience to share that comes from my deployment to Afghanistan. Due to the nature of my service, I can not and will not share anything that will breach any level of OPSEC or INFOSEC in any way, shape, form or reveal any details that will or can be construed as such to compromise any operations myself and other members of The U.S. Military conduct on a daily basis. That being stated, here is my story:

I am a U.S. Army Infantry Squad Leader, a Non-Commissioned Officer with ten years in service, and I have 12 soldiers under my command in my squad; ten soldiers and two Non Commissioned Officer Team Leaders. My soldiers are ranked E-3 to E-4 with 18 months experience at the very least, with my Team Leaders having 4 and 5 years experience respectively. All of us have at least 1 combat deployment together with the senior of my soldiers having 2. All of us have enough experience in our service that we are absolutely confident in our abilities and skills as Infantry Soldiers and know what to do and how to do it given any and all combat situations we encounter. So when we are given a mission as a Squad, separate from our Platoon, we did not really give any thought to the nature of the orders or the fact we would be a significant distance from our platoon or any ground assistance whatsoever, separate from any CAS or ARTY we could call on and other assets available.

I received the Mission, issued the WARNO, made a plan, initiated movement, gathered recon and completed the plan. I issued the OPORD and we ‘Oscar Miked.’ All the making and appearance of a usual and routine mission, something we did daily and completed daily. And then we reached the objective, and it all went to what I can only describe as hellish given form. We had vehicles that were specifically designed for being explosive resistant and armored enough to give us an edge in surviving a multitude of situations we would come across.

It was dark, and we have NVG’s on, approaching a small village (7 buildings) under cover of darkness, being as quiet as possible, ready for anything. We entered and cleared house after house, and found bodies, a LOT of bodies, so many it was hard to enter any dwelling without stepping on any of them. And I have never, in ten years seen anything as disturbing, or as shocking as the condition the bodies were in. And the sheer number was numbing to behold. Some looked as if they were ripped or torn in half (That is no mistake of typing or description, I literally mean TORN or RIPPED) by sheer brute strength. Some looked crushed as if a ton or more of weight was slammed into them and I mean PULPED. I have run other human beings over with my 6 ton vehicle and I know CRUSHED when I see it. And others looked as I would expect if I where to eat a piece of raw meat with my teeth, if I had teeth like a shark or some sort of carnivore. Like something had taken a big chunk off of them and kept going, and the rest looked like what I would imagine some sort of mythical monster or something with claws or teeth or sharp anything would have went through them like so much defenseless flesh all at once.

We finally reached the end of the village, and met something I can only describe as the closest to demonic as human language can make it. And it was TERRIFYING. Thinking about it as I type this is giving me chills, making my heart feel like it’ll burst from my chest and that at any moment that THING will burst from somewhere and do unspeakable things to me before it kills me; ripping me apart like a rag doll full of blood and flesh. I STILL have nightmares about it. First vehicle opened up on it with .50 cal. APT and he was going cyclic. Next thing I know I see a 6 ton armored vehicle, that can take up to 80 lbs. of explosive force and come back rolling, literally FLY. Not roll, not flip, FLY. It landed in the middle of the freaking village in pieces. 6 damn tons of armor. FLEW. 700 meters.

My vehicle was next, and I have never cycled an automatic grenade launcher so fast in my whole career! I was linking belt after belt after belt, and I was unjamming it almost as fast as it jammed. I am screaming my head off on the radio at the same time trying to get a hold of my other vehicle, call in CAS or ARTY and ordered my squad to shoot this thing with every weapon we have, even though I know for a FACT that we were all doing it anyway, and I am still screaming. I can hear screaming and gunfire, that sounds like it’s millions of voices screaming with us, with explosions and tearing metal; absolute chaos is in control here, and I’m screaming, crying and PRAYING. But then, the craziest thing I’ve ever seen happened. Everything went absolutely SILENT. No sound. No voices. No gunfire. No explosions. NOTHING. The world went MUTE. And after that, everything slowly came back.

My Alpha Team Leader, who climbed up to me, had to slap me, HARD to snap me out of whatever hellish zone I was in. My best guess is shock, but unlike anything ever I heard, experienced or watched. It took hours for me to get it together and start attempting to control the situation, get communications with LT, and come to grips. First priority was the first vehicle; we could not raise them on coms so I sent two to go see if they were alive and needed medical attention. Then I realized we didn’t get a BDA on the thing we just unloaded on. I directed my driver to get closer to the area, and I noticed something right off the bat. There was damage EVERYWHERE except for one spot. And in that spot was untouched and pristine like it had never been subject to all the firepower we had directed at it. Not a single impact. There was no sign of that thing anywhere. Not even a footprint.

I had been deployed 7 times in 10 years and never have I seen anyone or anything walk away from that much firepower. EVER. I know for a fact that no human on this Earth could. My five soldiers in the first vehicle lived, miraculously due to the cab being reinforced but suffered severe blunt force trauma from impact, enough that all five in the vehicles were immediately given medical discharge and 100% disability a few months later. My other soldiers are all receiving the best psychological care possible. I am undergoing psychological evaluation as well due the report I gave to my command. The treatment given to me and my squad is no surprise. However the way my report of the incident was handled and what happened after is very confusing and very frustrating. No more about this has been mentioned or acknowledged again. I do not care if someone believes me anymore, as every time I am asked about it and answer, I am met with reactions of disbelief or pity and sympathy for my “Damaged Mental State.”

I am even attempting to be cleared to continue my service, and am forced to lie to my counselors and therapists about my progress in “recovering” from my experiences. I am still haunted by this incident, and it still gives me a racing heart just thinking of it. I am hoping you share this to your channels, and ask to remain anonymous; to be referred to as “Sarge” if anything. Even if you do not, thank you anyway for your time reading this, and thank you for allowing me to send this to you, as I do not get anyone I know outside of my former squad to listen and believe me. Thanks again, Sarge.”