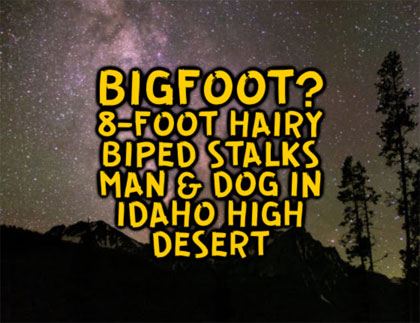 A man and his dog are spending time in the high desert of southeast Idaho. One night, the dog is alerting to a massive hairy biped that seemed to be stalking them.

“This might seem unbelievable to some people, but it is 100% true. It is burned into my memory and I will never forget it, even the small details. I present it to you exactly as it happened.

I grew up in the high deserts and mountains of Southeast Idaho. Most of my life has been spent outdoors; whether I was on the back of a horse pushing cattle for local ranchers or hunting elk, or on foot hunting rabbits and deer through the sage brush.

I was given my first .22 rifle when I was 9 years old and spent every minute I could out in the lava flows hunting rabbits, rock chucks and sage hens. I remember several times that my mother or father would drop me and my best friend off somewhere along the lavas and pick us up at the same spot three or four days later after many miles of exploring and living off the land. All we would take is water, shells and a knife. When I got older, and had my own vehicles, my trips got longer and farther into the desert. As I write this I can smell the sage brush and feel the desert sun on my face. Suffice to say; I love that Idaho desert more than any place on earth. I feel more comfortable out in the desert, 30 miles from the closest person, than I do in my own living room.

During the summer of 2001, I was south and slightly east of the Big Southern Butte. I had spent a couple of days looking for arrowheads. Everything had been pretty normal; I walked for miles, found a few arrowheads, saw a few coyotes and deer, pretty normal.

At this time in my life, I always had my dog with me. He was a huge Chesapeake Retriever that weighed over 100 pounds. He was very protective of me and my belongings, and was meaner than he** to anybody who acted suspicious or threatening. His surly demeanor towards anybody who messed with me or my stuff earned him the name “Kane” with my family and friends. The name stuck.

Kane loved to go anywhere I went. He loved to go out to the desert and run around, never getting too far away from me. I always felt very secure with him around because he had proved time and time again that he was aware of every living thing that approached us out in the desert. And if that thing was dangerous, whether human or animal, he held no qualms about tearing right into the middle of them. In fact he enjoyed it.

Anyway, we made it back to the pickup truck an hour or so before it got dark. I gathered up some juniper branches and sagebrush to make a fire. I cooked up some dinner for my dog and I and then settled into my hammock for the night.

There is nothing better than sleeping in a hammock while outdoors. Unfortunately, we don’t have a lot of trees in the desert so I would find a juniper or fence post, park my pickup close to it and tie one end of my hammock to the pickup bed and one end to the tree or fence post. I spent many comfortable nights rigged up like this.

This night was no different. I climbed into my hammock and was soon asleep. A couple of hours later I woke up to rain drops. It had started raining pretty hard and I was getting pretty wet. I quickly threw all of my gear into my hammock, untied the end from the fence post, rolled it up with everything inside it, and tossed it into the back of my pickup with a tarp over it to keep it dry. With all of my gear safely stowed, Kane and I crawled into the cab of the pickup and settled in for a dry, if cramped, rest of the night.

Around 3 AM in the morning a strange sound woke me up. I was reclined back as best I could in the driver’s seat and Kane was sitting up alert on the passenger side. He was growling very softly and the hair on his shoulders and neck was standing straight up (a very menacing and intimidating sight. I am glad he was on my side). He was looking over my shoulder out the driver’s side window. It was his quiet growling that had woke me up. I didn’t move but just opened my eyes and looked around by moving my eyes in their sockets. It had stopped raining and the clouds had gone away. The sky was now clear with a bright, almost full moon overhead. It was bright enough that I could see Kane very clearly. I wondered what he was focusing all of his attention on and lifted my hand up in front of his nose. I don’t know why I did that, but that’s what I did. He never even looked at me, but moved his head to the side so he could continue to watch whatever was out my driver’s side window, continuing his quiet, threatening growl.

I had never seen Kane so focused on anything the way he was now. It sent a shot of adrenaline through me and I was immediately wide awake. It gave me goose bumps and the hair stood up on my arms and my neck. I was scared to turn my head and look out the window. I wasn’t sure that I wanted to see what was outside.

I summoned the courage and slowly turned my head to the left and looked out my window. About fifty yards away, slightly behind the truck and slowly working it’s way closer towards me was a large dark figure. In the bright moon light I could see that this thing was covered in long, coarse hair. It was walking on two legs and moved like a man, but different. Its arms seemed longer, and it kind of had a “swaying” motion as it walked. The moon shone through the hair around the outside of it’s body and the dark, solid shape underneath was visible. It was moving in slow steps towards the pickup. Every few steps it would stop, crouch down, and wait a few seconds before moving ahead a couple more steps, exactly as my dad had taught me to do while stalking deer and elk.

I have no idea if this creature meant to do me harm. But seeing it move exactly as I did when putting the stalk on a deer, with me as the target of it’s attention, did not make me feel very warm and fuzzy inside. My mind was in overdrive. Imagine, my reality of what exists and doesn’t exist in this world was suddenly and without much fanfare turned upside down. At the same time, for the first time in my life, (it would happen many more times in the near future in a crappy place called Iraq) genetically inherited, but deeply buried alarm bells were screaming inside my head. My subconscious recognized the danger and demanded that I do something while at the same time dumping bucket loads of adrenaline into my system.

My thoughts jumped immediately to my pistol and in the same instant I remembered that it was rolled up in my hammock in the back of my pickup under a tarp, useless. Not that my pistol would do any good, as this thing got closer I could see that it was BIG, probably seven or eight feet tall and SOLID. It moved like an animal that is very heavily built but is quick and fast at the same time, like a tiger maybe.

Kane had gone from sitting to standing on the seat. His hair was standing straight up and his quiet growl had turned into a savage snarl. What a dog! Here is this monster outside my truck and my dog is ready for me to open the door and turn him lose!

My mind quickly switched from fight mode to flight mode. My keys were in the ignition. Without taking my eyes of this thing I reached up and started the pickup. The creature was less than thirty yards away now. When it heard the engine start it crouched down lower to the ground than it had crouched before. The top of its pointy head was just above the level of a patch of sage brush that happened to be between him and me.

My pickup was nosed up to a lava rock wall. The only trail out was to my right and behind. There were large lava rocks scattered on the ground so I had to make an over 180 degree turn while backing up to be lined up with the road. I threw the truck in reverse and floored it turning on my lights at the same time. As I swung through the turn my high beams swung right across the creature. It had put its head down (probably to protect it from the glare) and all I saw was the top of its head. I noticed a mass of coarse, dark gray hair before its shape was swallowed by the darkness.

I drove down that two track, desert road way faster than I normally would. My truck was bouncing over rocks and plowing over sage brush when the curves were too sharp to take at that speed. Kane and I were bouncing all over the inside. I drove that way for several miles, continuously looking behind me, until I calmed down enough to slow down. I drove out to a main road and stopped to mentally go over what I had just seen. But stopping out there in the dark was too much. I ended up cutting my trip short and just went home.

This was a long post but I hope that I could convey a small amount of the effect that this experience had on me.” ST