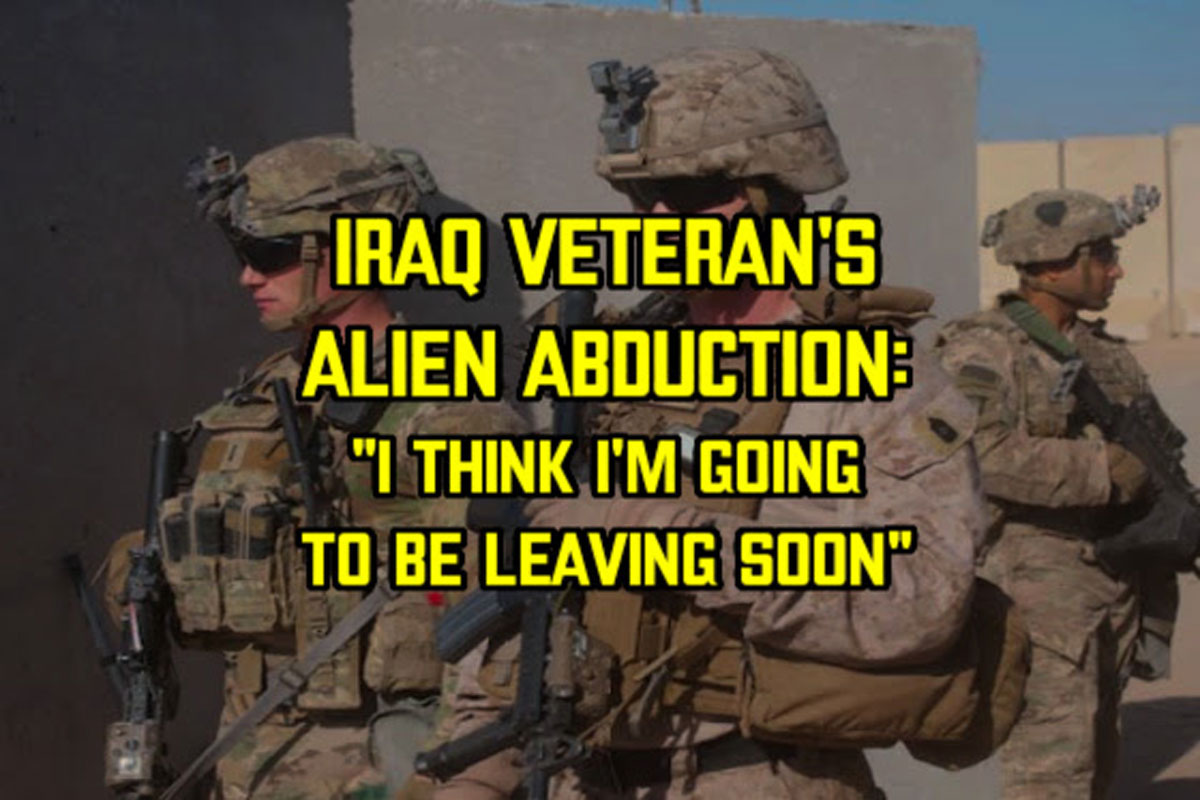 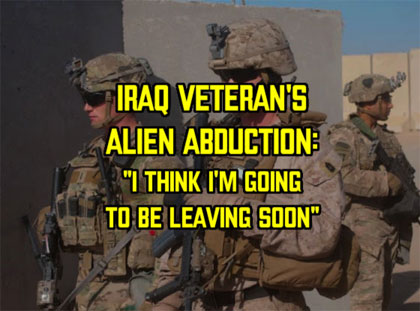 A wounded Iraq veteran, living at Fort Campbell, Kentucky, tell his wife about his alien abduction while in Iraq. He states, “I think I’m going to be leaving soon.” Years later, he’s ‘gone.’

The following narrative was forwarded to me several years ago:

“In 2005, my husband (who I’ll refer to as ‘Bill’) and I purchased a house near Fort Campbell, Kentucky. Bill was stationed there and we figured that he would most likely stay since he was a wounded veteran from Operation Iraqi Freedom and had accepted a permanent position at headquarters. The house was built in the 1890s and had a Victorian style to it though there had been several renovations and additions. We have 3 children, all girls, who were aged 9, 11, and 15 at the time we bought the house. There was a lot of space for everybody including a large yard with woodland surrounding the property.

When Bill returned from rehab after suffering his injuries he didn’t elaborate on how he sustained his injuries nor did he talk about his time in Iraq. We had been married for 12 years before he was deployed and I was content to the life as an Army spouse. When he returned, things had not really changed until we had settled in to the new home.

One morning I woke and noticed that Bill was not in bed. It was around 06:30 and he usually slept in until 07:15, then he would get up, eat breakfast and head to headquarters. I woke the girls for school and made my way downstairs to the kitchen to start making breakfast. When I walked into the kitchen I noticed Bill was seated at the table, arms down his side and staring straight ahead. It actually shocked me because I had never seen him like this. I sat across the table and looked directly at him. After a minute or so, he looked into my eyes and said “I need to tell you something.”

He decided to stay home that day while I proceeded to feed my girls and get them off to school. Bill continued to sit at the table the entire time, not saying a word. I could tell that the girls were a bit confused since he did not speak to them.

When I returned home from dropping the girls off at school, Bill was sitting in the living room drinking a cup of coffee and reading the newspaper. I sat down on the sofa fearing that I was about to hear bad news. He looked at me and said “I think I’m going to be leaving soon”.

I was in shock. “What exactly are you telling me?” I asked. He looked away for a second then looked back towards me “It has something to do with what happened in Mosul”. (His division was deployed to northern Iraq near the city of Mosul). His hands and lips started to quiver “something happened that I can’t explain. I wasn’t able to report it to command because of the ramifications.” He stood up and walked over to the sofa and sat down beside me. “The wounds I sustained were not from enemy ordinance – I was abducted by a group of people or something.”

He explained that his platoon was on night patrol east of the city when a firefight began. Several of the soldiers went down requiring a retreat in order to get the wounded out of harm’s way. At one point, Bill was alone covering several soldiers who helped others back towards the city. Things had quieted down and Bill was about to head back towards base when suddenly he was knocked off his feet by a tremendously loud ‘thud’.

The next thing he remembered he was laying face up on a table in a spacious room with bright yellow lights all around. There were four beings that looked human but were dressed in thick dark wool-like robes. Each had a small circular cap on their heads that reflected the yellow light. One of the beings told Bill that he was to become ‘one of them’ and that ‘he had no choice in the matter’. After that, he had no further memory with the beings.

When he became conscious, he was in a medical helicopter on his way to Baghdad. He was told he was being transported for medical treatment at another location. He was then given what he thought was a sedative. He woke sometime later in a dark room unable to move. After a time, a nurse come into the room and told him that he was in Germany and being treated for his wounds. She inject something into the IV then left and again the room went dark.

Bill thought from that time forward he was kept in a semi-conscious state for a long period of time, possibly for several weeks. About a month after sustaining his injuries, he was admitted to a hospital for rehab. This was the first time that he was able to see the extent of his injuries as well as an explanation of what he was facing.

Both of Bill’s legs had deep long scars on the front and back. He was told that he lost a considerable amount of nerve and muscle tissue but that he would be able to recover much of his strength and sensation through rehabilitation. He inquired about surgery records but was told no surgery was performed. He then asked how the wounds were closed. The physician said that there was no description of sutures or skin grafting in the record. The physician agreed with Bill that this seemed very irregular. For over a year, Bill tried to get answers but was stonewalled by military and medical officials. When he returned home, I was surprised Bill was able to move around as well as he did even though the scars on his legs indicated significant trauma.

As Bill sat beside me, his voice started to shake “they will come back for me. I have no way of avoiding it.” I was still awestruck by everything I had heard. I said “is there any way the medical staff at the fort can help you?” He looked away and said “it’s beyond that point.”

We continued to live a fairly normal life despite what Bill had told me. He never mentioned the incident again and I tried to forget it. As time went by, I assumed Bill has suffered some form of battlefield stress disorder though he maintained a busy and productive schedule at home and at work.

One warm evening, in July 2007, Bill left us. He had been working in the yard when all of a sudden my youngest girl let out a horrific scream. I ran out the back door into the yard and witnessed Bill’s lifeless body laying near the poplar tree. He had taken a pocket knife and drawn it across his throat. It was so abrupt and unexpected.

Bill had stated that he did not want a military funeral and wanted to be cremated. After a coroner’s inquiry it was determined that Bill had taken his own life.

Last year, I was cleaning out Bill’s clothes and personal effects when I discovered an envelope in a foot locker that he kept in the garage. I pulled it out and read the single sheet of paper…it read –

“They told me it was time to leave. I’m sorry though I’m sure you’ll understand.” No. I don’t understand.” KS