The power of the people vs the Supreme Court
SHOW ALL 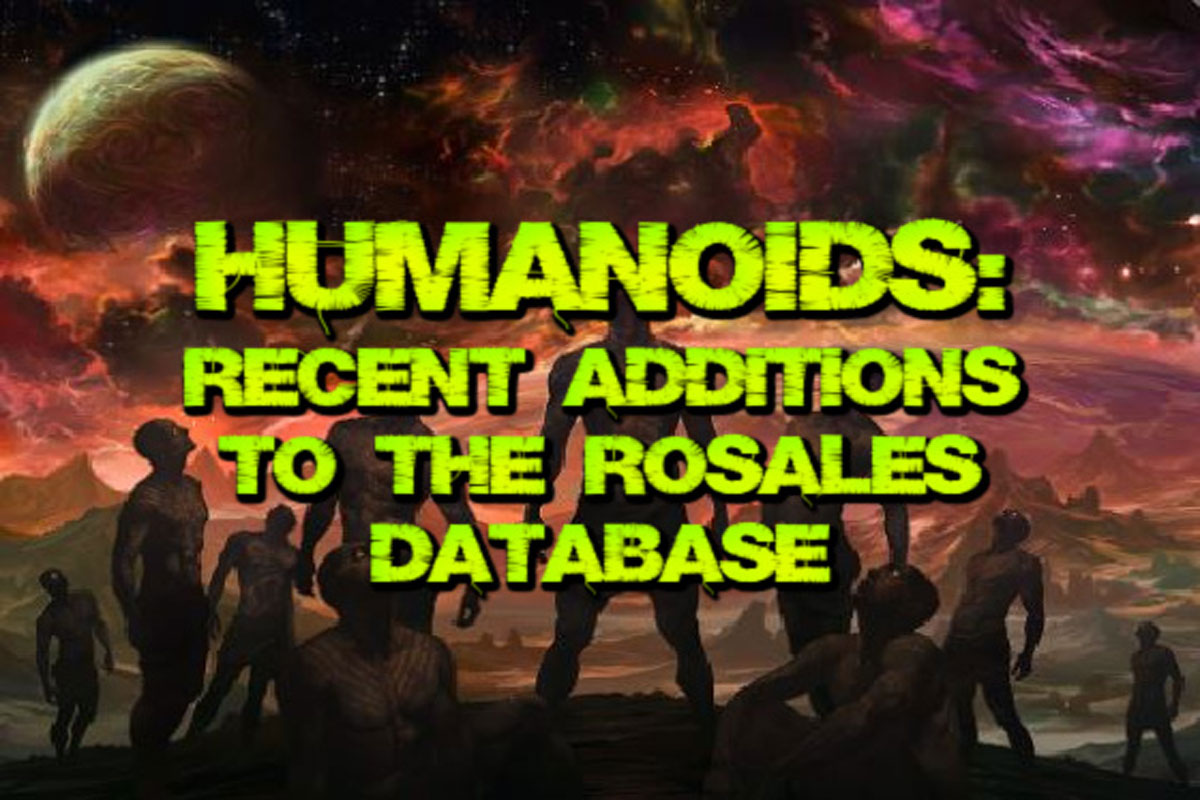 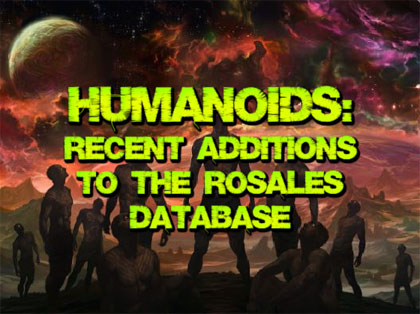 Thanks to Albert S. Rosales for providing the newest humanoid updates from his ever-expanding database:

Rudolf Z. fell asleep after midnight, not completely asleep but something between sleep and wakefulness. In this state, which seemed like a living dream, he was completely within his senses, he just could not make any normal movements. He could barely turn his head sideways, so he could not see what there was on the right side. He was able to move relatively well his right hand, except that he could not develop much strength. His left hand was under the blanket, and he tried helplessly to pull it out, but his muscles were too weak. It was complete partial paralysis.

To his right stood two, about 120cm tall gray creatures. Their color was slightly darker than the medium gray color. It seemed to him that they looked exactly like the mannequins of the little gray aliens he saw exhibited at the Ufology Conference in Budapest in August 1997.

He wanted to get out of bed so he could defend himself but could not. His legs would not obey him. With his free hand he grabbed one of them, probably by the shoulder of the one closest to him. The creature did not react to his touch at all, and his body did not resist. He did not feel threatened at all. He just wondered what they were looking at him. Logically, he assumed that if they had good intentions, they would not had paralyzed him and restrict him without his consent. He felt a strange cold when he touched the creature, as if he had touched a freezer. Even to the touch, he was different from a normal man. The figure felt the same as a flexible silicone figure with an empty interior. He did not notice any clothing on the creatures.

What they wanted from him or what they wanted to do with him, he did not find out. He did not notice anything that was an expression of any feelings or interest in their part. They were not carrying any tools and their movements were completely illogical to him, aimless, mechanical. From a human point of view, it made no practical sense. They made no sound or spoke to each other. He also reported no communication that he could remember with them.

He could not say exactly how many were in the room, he could not turn his head enough to look around. Judging from their movements, a third may have been present, but he cannot say for sure. The room was much brighter than normal as if some hidden lamp had illuminated the place where he lay with a diffuse light, but without illuminating the entire room. Interestingly, he was not afraid at all, I did not have the slightest feeling of fear. He did not understand that at all. He was fully conscious and fully aware of what was happening. However, it seems that something must have blocked the expression of the emotions of fear. But thanks to that he was able to observe and remember everything in detail. He felt annoyed and practically helpless towards them and he was angry. Suddenly he felt as if “had woken up”, the grays were nowhere in sight, and the room lit only by a streetlamp outside the window as always.

Around midnight the main witness and his girlfriend were driving around stargazing. They saw a lot of stars out in their neighborhood, and they thought it was romantic, so he parked his car at the side of the road, opened the roof window and stargazed. Then all of the sudden they heard an extremely loud bang that sounded like a gun shot, but it came from the sky. Both witnesses were startled and looked up at the sky. And that is when things got “weird”. They saw a multi-colored meteor or some sort, but it was going far too fast for a meteor. The sound got louder, and the situation did not look too good, so they tried to drive away, and that is when the impact occurred. The shock wave was intense and made the car, his girlfriend, and the witness bounce probably a few inches from the floor.

He asked his girlfriend if she was okay, and she looked like she had just seen a ghost while staring at something behind him. When he turned around, he saw a car-sized, shiny, metallic object smoking on the ground. They got out of the car and the object had what seemed to be individual plates shifting and attaching to the other plates. He never felt so scared in his life. He realized that it was not a meteor, or any type of known craft. It looked like technology, but nothing he had ever seen before. The plates shifted to a kind of star shape, but the plates were still completely visible.

His girlfriend screamed in fear when they both saw the entire structure melt into what looked like a black liquid. They ran to the car and tried to start it, but it was not working, it did not even make a sound. They looked back at the object and it was growing taller, but they did not hear any noise from it, so they decided to get out of the car and run as fast as they could. They looked back only to see the object solidify into a giant, mechanical, metal humanoid figure and it turned around and chased them down the road until they found the edge of the forest in their neighborhood.

They climbed up a tree and hid there for about 7 to 8 minutes praying not to die while he was trying to calm himself and his girlfriend down. The giant metal humanoid stopped looking around and ran off just after the main witness got down from the tree and snapped a photo with his phone.

The witness identified only as Mbak X had just returned home from work on her motorbike, it was hot, sunny, and slightly cloudy day. Her house was located close to an Air Force Basse, so she was used to seeing helicopters and the like. When she arrived home, she suddenly noticed a strange light moving in the sky that suddenly comes to a stop. Mbak turns off her motorbike and stares at the light which now moves in a zigzagging motion and then suddenly stops again, the light then descends at high speed and seems to become larger. Being alone she decides to go into her home, but later that night something strange occurred.

As they were getting ready to go to bed her husband suddenly sees a bright orange light outside the window which illuminates the bedroom. Not knowing why, Mbak became very frightened and attempted to hide, her heart pounding loudly. She then heard a buzzing sound, like the sound of an exceptionally large bee and suddenly a glowing ball appears inside the bedroom. The glowing ball radiated heat, was very dazzling and appeared to be throbbing, seemingly “scanning” the couple. Mbak felt as if the ball was “doing something to her head”. Soon the sphere or ball disappears, and her next memory is of walking up in the morning feeling very dizzy.

Days later Mbak and her son reported experiencing memory losses, waking up late not knowing when she had gone to sleep. Her son also reported several moving shadows in the kitchen, and some objects in the house were found in different locations from where they were originally. On several occasions her soon woke up sleeping on the floor after having gone to bed on the mattress the night before. Even stranger, Mbak reportedly received a message from the visitors that explained that the moon did not belong to Earth, and they had a specific purpose on Earth, every race or species had a specific purpose, or goals/interests greater than can be understood by humans. They mentioned the “Tree of Life” that is where everything begins.

A 55-year-old man from Freiston claims to have seen a “10 ft tall human-shaped creature” while out with his dog near Boston. Michael Campbell had been collecting wood to craft in Decoy Woods, near Friskney with his dog when he saw the figure. The 55-year-old man claims that the human-shaped figure moved “like the clappers” and scared his dog which bolted from the woods. According to Mr. Campbell he would regularly go down the woods and set up a campfire, but after seeing the figure he has not been back.

Initially his dog was startled and began barking then he saw this 10ft tall figure dart through the woods. It was hard to describe what it looked like, but it was hunched over and growled at him and his dog as they chased after it. After it growled, his dog ran off, so he ran off after the dog. The creature was crashing through the branches which terrified Campbell. He also remembers seeing a badger ripped apart and its was not something that a fox would do.

Location: Arizona (exact location not given)

The witness was about 15-weeks pregnant when she experienced a bizarre ‘dream’. In it she saw a crashed craft and flew it using her mind. A couple of days after that she is convinced, she was actually abducted.

She was lying in a room with metallic walls, similar to a hospital room you would see in a futuristic Sci-Fi film. She was laying on a bed, not strapped down but was wearing a gown. She looked to the right and sees a tall Nordic-like woman (which reminded her of the blonde version of Arwen from LOTR). And there were about six Greys behind her, about 4-5 ft tall. She cannot remember what they were wearing, but it almost looked as if they were naked, which she knows they could not have been. She ‘knew’ that the woman was a Pleiadian.

The woman spoke to her, not with her mouth but like, “through her eyes” (telepathically?). She told the witness, “He is the prophecy child. You are safe.” And she just remembered repeating that in her head. She felt calm and almost at peace. She was not scared. She had never been told the sex of her baby, but for as long as she remembered she always knew her first born would be a boy born in October, and a year later, that is exactly what happened. The Nordic woman knew she would be having a boy before the doctors did.

She knew she had been abducted because she had fallen asleep in the living room of her mom’s house, and she had woken up, upside down, on her sister’s bed. She does not remember falling asleep, but she remembers it was around midnight when she last looked at the clock, and when she woke up it was either around 3am or 5am. She cannot really remember.

Her entire life she has always seen shadow people. Her grandmother (on her father’s side) and her daughters have seen a plethora of UFOs in their lifetime. While in the hospital later she suffered kidney sepsis, but it did not affect the unborn fetus.