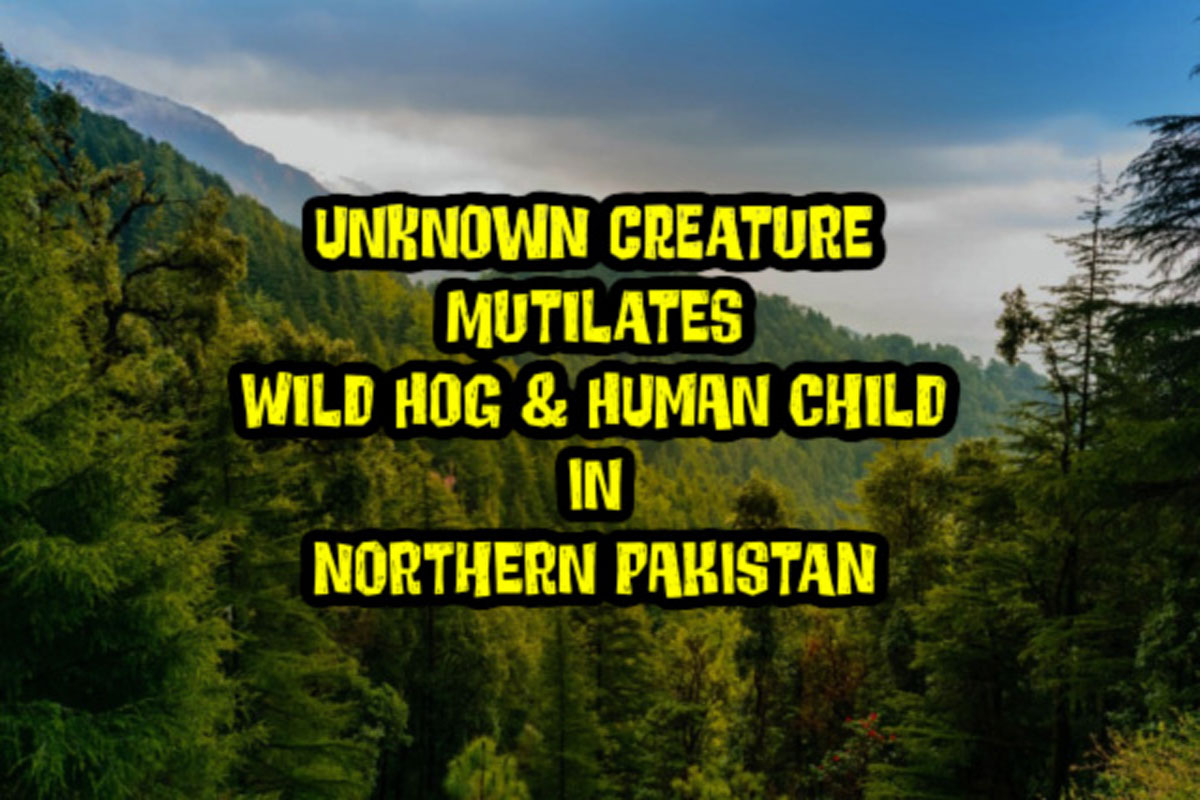 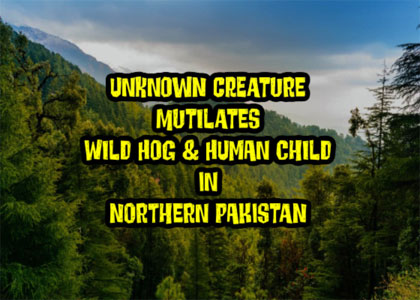 A Pakistani man shoots a wild hog in the woods at night. When he comes back to remove it the next day, the hog is torn in half. Later, a child was mutilated in the same area.

“I live in Northern Pakistan, and its a lot like the northern US or Central Europe in terms of environment. It is a predominantly Islamic country with a Hindu background and we have a lot of superstitious beliefs such as witches (‘churail’ in our language with similar abilities to skinwalkers), demons, as well as witchcraft, magic, etc. I am aware that skinwalkers are native to North America.

I don’t live in the countryside but I have a farm that I visit almost every weekend. It’s less agricultural, more pleasure. The farm is located in a community of farms and to the north is a large patch of unclaimed forest, probably around 200 acres. The forest is populated with foxes, coyotes, porcupine, and wild boar, apart from feral dogs and such. I’ve been doing a lot of hunting in my time there and have never experienced anything like this before. I used to hunt at night alone quite a bit, prior to this incident.

I was hunting at night at about 1 AM, which is around the time wild boar are most active, being nocturnal creatures. I shot an adult female hog, probably around 3:50 AM. Since it was getting late I decided to remove the body the next morning (most Pakistanis are Muslims, so we don’t eat them and we hunt boar because they have a habit of messing with crops and livestock). We have to remove the body legally and move it to a government dumping ground. I placed a marker and went back home. Nothing creepy happened at all on the way back.

The next day at around noon I headed back into the woods to remove the bodies. I forgot to mention I shot a few other males but in different places, the female being the last. I made my way to the location of the female and I started getting kind of creeped out. The woods had gone silent. No wind, birds, insects, anything. I started to get goose bumps and a generally very uncomfortable, feeling like I was being watched. When I got to the body, I saw in horror that this thing had been torn in half, with one half lying a good 15 feet away from the other. There was dried blood all over the place. But it wasn’t the blood itself that freaked me out, it was the fact that there was blood at all. Blood dries up in the veins of dead animals within 10 minutes of death, meaning that whatever did this had done it within 5-10 minutes of me leaving the body. The body had not been eaten and there were no scavengers feasting, which was strange to say the least.

I decided to get out of there real quick. I unholstered my pistol (didn’t have a rifle on me at the time) and started speed walking out of there reciting the ayat-al-qursi as well as other Islamic verses meant to ward of evil (I’m agnostic BTW, but at the time I was praying to all the gods). After about 10 minutes of walking the uneasy feeling wore off. The sound again returned to the forest. It was like a switch being clicked. I went home and just kind of blocked it all out. This happened a couple of months ago, but 2 days ago there was a development

A week ago, a child of one of the workers at a neighbouring farm went missing. He was 9 years old. 2 days ago my father told me that they found his decaying mutilated corpse in the woods, not more then 50 yards from were my incident took place months ago (my dad doesn’t know about my incident). The kid’s face had been ripped off and his left leg was lying away from him. The police were called and the place was blocked off. But this being Pakistani police they chalked it up to being a wild animal or something. The owner of the farm paid for an autopsy at a good private hospital and it came back inconclusive. All they knew was the kid died of blood loss. The body had not been touched by scavengers despite being there for a few days, and was intact apart from the face and leg. The person that found the body (another dude from a neighbouring farm who was out hunting) said he felt very uneasy before he found the body.

I’m sure there’s a rational explanation to all this and I’m probably jumping to conclusions. The events are most like not connected. However all I can say is I’m not going back to those damn woods alone again, and not at night even with someone.” LM

NOTE: The first suspect I would have named would be a Leopard. But the fact that none of the bodies were fed on is highly suspicious. A Leopard would have most likely moved a body up into a tree to feed on it. Lon

Weird Tales of the “Little People” Mythology or Fact?