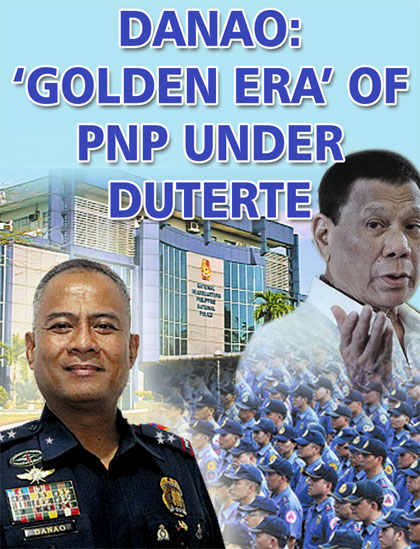 THE past six-years under the Duterte administration will be summed up by the Philippine National Police in just words: “Golden Era of the police force.”

For that, the PNP rank-and-file headed by Lieutenant General Vicente D. Danao Jr. is expressing its deepest gratitude to the outgoing Commander-in-Chief and are all ready to ensure the smooth transition of power to President-elect Ferdinand ‘Bongbong’ Marcos Jr. this coming June 30.

“The PNP would like to express its deep gratitude and appreciation to our President, as our shared dream of bolstering to a hundred percent the mission-essential capabilities of the 225,000- strong police force and making the people feel safer has been finally realized,” said Lt. Gen. Danao during the Duterte Legacy Summit held at the Philippine International Convention Center (PICC) on Tuesday last week.

The President made sure the police force will get all ‘shoot, move, communicate and investigate’ tools and equipment to effectively fight drugs, criminality, terror and corruption since June 30, 2016 leading to a significant reduction in all major crimes from 2016 to date.

The number of Persons Who Use Drugs (PWUDs) also went down from 4.73 million in 2016 to 1.67 million in 2019, based on a household survey conducted by the Dangerous Drugs Board.

“The entire police force is grateful to our President Rodrigo Roa Duterte for his significant peace, economic, medical, and social aspirations, as well as platforms for the welfare and well-being of every Filipino citizen. During our dear President’s six-year tenure, our country and economy have greatly improved even our law enforcement which was greatly felt by our countrymen. To eradicate crime, corruption, terrorism and illegal drugs had been the battle cry of every policeman and woman,” he added.

The PNP-0IC vowed to continue the effective programs, innovations, and approaches to every problem that yielded positive outcomes and feedback from our communities since the start of the Duterte presidency.

“With this, we assure our President, the Filipino people, and our beloved country that we will remain steadfast and committed to sustaining and improving his projects and programs in the fight against illegal drugs, anti-criminality, corruption, terrorism, and including the unseen enemy, among others, as part of the Duterte Legacy,” Lt. Gen. Danao added.

NEARLY P800-M WORTH OF SHABU, OTHER ILLEGAL DRUGS SEIZED BY PNP-DEG SINCE FEBRUARY

In line with their stepped up campaign against illegal drugs, nearly P800 million worth of shabu and other prohibited substances have been seized by agents of the PNP Drug Enforcement Agency headed by Brigadier Gen. Randy Q. Peralta since last February earning the unit commendations from Lt. Gen. Danao.

Danao cited the number of PNP-DEG-initiated anti-narcotics operations in coordination with the PDEA over the past three months as the police force continued its all-out effort to address the drug menace in the country.

Since February this year, the PNP-DEG also recognized the need to set forth the comprehensive balance approach to drug demand reduction and supply reduction, through sustained law enforcement operations, and reducing consumer demand for drugs and other substances through its drug awareness programs with the support of the other government agencies, NGOs and faith-based groups.

So far, the PNP-DEG under Brig. Gen. Peralta has accounted for a total of P783, 381, 352. worth of illegal drugs including more than 107 kilograms of shabu, 250,000 pieces of fully-grown marijuana plants and seedlings as well as nearly 20 kilos of dried marijuana bricks and Kush.

The unit also arrested 338 known drug personalities and neutralized three armed suspects during the conduct of 295 anti-drug operations during the past three months.