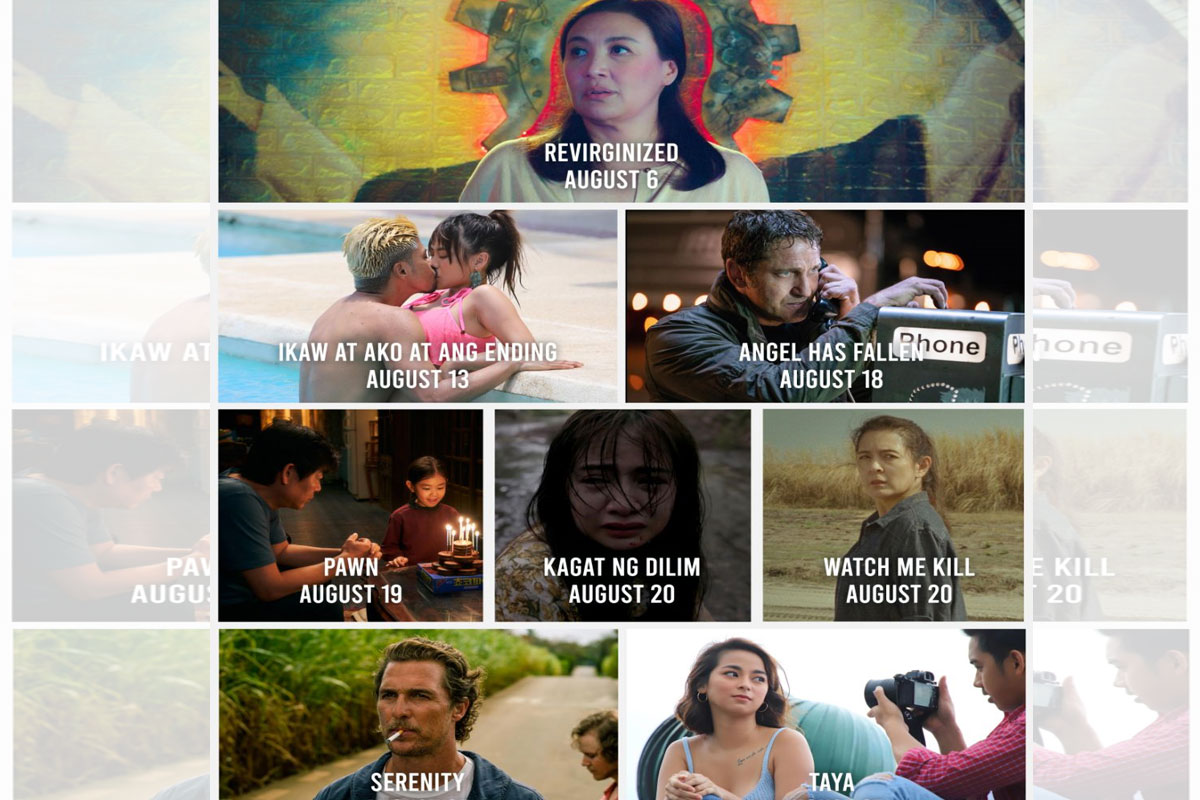 August’s to the max line-up on Vivamax

Vivamax has a lot of exciting news this August starting with the launch of Vivamax Originals and top local films to suit every Pinoy film viewer’s taste.

First up is Revirginized, another sure hit by maverick and sensational director Darryl Yap, about Carmela in her 50s, who relives her younger years she never had by letting loose at a wild beach party. She gets to enjoy life again and finally puts herself first with the help of a hunk tattoo artist.

Witness the one and only Megastar Sharon Cuneta in her hottest, most virgin, and funniest role.

The next film, Ikaw at Ako at Ang Ending, stars real-life sweethearts Kim Molina and Jerald Napoles. This is their second movie together after Ang Babaeng Walang Pakiramdam. From the writer and director of the blockbuster hugot movies, Camp Sawi, Meet Me in St. Gallen and Sid & Aya: Not a Love Story,” Irene Emma Villamor, this romance drama film airs on August 13.

Another Vivamax Original is Taya, which stars AJ Raval and Sean de Guzman. Directed by Roman Perez Jr., here comes another sexy action film about Sixto who promises to take away Nanette from the syndicate that condemned her as an online gambling prize.

Taya will show on August 27.

Rico Blanco Songbook: Musical Stories by Rico Blanco, a musical documentary which features a 10-track album compilation that reinvented the hits of the Pinoy rock artist such as Your Universe by Sarah Geronimo, Wag Mong Aminin as interpreted by Ebe Dancel, This Band’s Liwanag Sa Dilim and Janine Tenoso’s A Love To Share.

Local titles include the all-new Kagat ng Dilim horror anthology directed by a fresh batch of critically-acclaimed directors. Watch Me Kill, starring Jean Garcia; and Divorce, a documentary which features real-life interviews of people who suffered from domestic violence and how they managed to get out of it. Vivamax also releases a lot of international titles including Hollywood and Korean. Angel Has Fallen stars Hollywood Superstar Gerard Butler, and Serenity, a mystery thriller film starring Matthew McConaughey and Anne Hathaway.

Korean titles such as The Closet, Secret Zoo, Pawn, and Steel Rain 2: Summit are highly recommended for a movie marathon. Ha Jung Woo, Ahn Jae Hong, Ha Ji Won, Sung Dong Il are some of popular artists in these films.

July is also as exciting for a lot of Vivamax Originals has been released. Gluta, a film about skin color and not just the bigotry and prejudice against dark skin, but a celebration of individuality, ethnic pride and the truth that love and happiness knows no color, stars Ella Cruz, Marco Gallo, Rose Van Ginkel and Juliana Pariscova Segovia.

Silab is a sexy film directed by the reputable Joel Lamangan. The love triangle launches Cloe Barreto in her first and very daring role with Jason Abalos and Marco Gomez.

Lovi Poe, Joem Bascon, and rising star Rhen Escaño star in The Other Wife, a sexy thriller that deals with jealousy and its fatal effects.

Another Vivamax Original is Nerisa, starring Cindy Miranda, Aljur Abrenica, AJ Raval and Sean de Guzman. Written by multi-awarded Ricky Lee and directed by Lawrence Fajardo, Nerisa will take you on a journey about gender and the power of women.

Other Local film offerings include the award-winning Mañanita, starring Bela Padilla and directed by Paul Soriano. Pandanggo sa Hukay, starring Iza Calzado, is about a woman’s journey through a series of unfortunate events. It is directed by She Andez and an all-female production team.

Another must-see is the multi-awarded film Edward, starring Louise Abuel and Ella Cruz.

Two local series can also be enjoyed on Vivamax. Encounter based on the Korean drama starring Cristine Reyes and Diego Loyzaga and Puto, the hilarious sequel to the classic movie starring Herbert Bautista, McCoy de Leon and the Beks Battalion.

Some of the best loveteams and movies produced by Star Cinema are also now on Vivamax.

Catch KathNiel in Barcelona: A Love Untold and Pagpag: Siyam na Buhay, LizQuen in My Ex and Whys, Pia Wurtzbach and Gerald Anderson in My Perfect You, JoshLia in Vince Kath and James, Bea Alonzo and John Lloyd Cruz in One More Chance and The Mistress, Jericho Rosales and Kristine Hermosa in Forevermore, Piolo Pascual and Toni Gonzaga in Starting Over Again, Sharon Cuneta and Robin Padilla in Unexpectedly Yours and Judy Ann Santos and Angelica Panganiban in the hit comedy film Ang Dalawang Mrs. Reyes.

Vivamax pushes July and August to the max for your viewing pleasure. And the “Ber” months will bring even more surprises.

‘Marry Your Daughter,’ may bagong bersyon