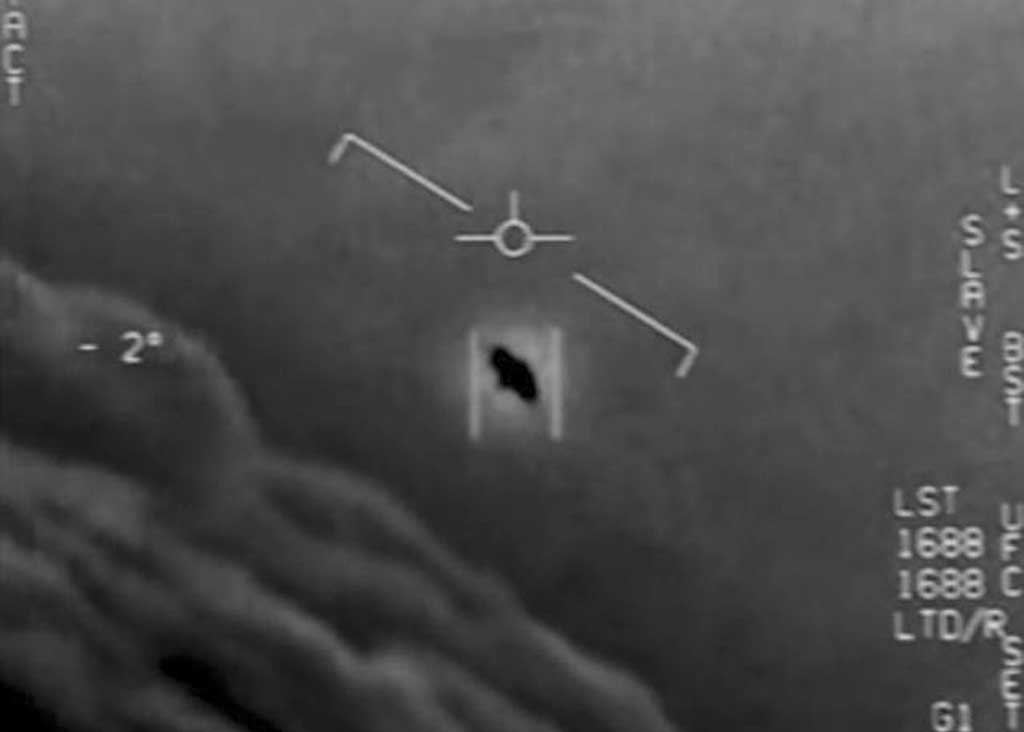 An image from of US military pilot’s sighting of an “unidentified aerial phenomena” that some think is evidence of UFOs
World,

AFP, June 4, 2021 — The conclusion of a classified US intelligence report on the existence of alien UFOs is . . . inconclusive, US media reported Friday.

US military and intelligence found no evidence that seemingly highly advanced unidentified flying objects sighted by military pilots were alien spacecraft, the report concludes, according to The New York Times and other media briefed on it.

But it also could not explain dozens of phenomena and incidents, some filmed by the pilots, and so could not rule out the existence of aliens.

According to The New York Times, citing unnamed senior administration officials, the report determined that most of some 120 incidents over the past 20 years had nothing to do with unknown or secret US military or government technology.

Nor were they related to objects like research balloons, which some postulated were behind the reports.

But it then could not explain what, for example, US Navy pilots saw when they recorded objects traveling at seeming hypersonic speeds, spinning and mysteriously disappearing.

While speculation over alien life has long been a cottage industry for conspiracy theorists, the sheer number of what the Pentagon terms unidentified aerial phenomena (UAP) has made it a serious issue, amid worries that US adversaries like China and Russia may be using unknown, highly advanced military and surveillance technologies.

“It could potentially involve safety and or national security concerns,” he said, referring to the UAP reports the Defense Department has logged.

The report, ordered last year, is to be submitted to Congress by the end of June by the director of national intelligence.

The main report will be unclassified and can be made public, but there will also be a classified annex, the Times said, that will remain secret.

The report, The Washington Post said, “will offer no firm conclusions about what the objects . . . might be.”

Interest was piqued in the possibility of highly intelligent extraterrestrial life after the Pentagon released videos last year, in which Navy pilots express amazement at the fast-moving objects they see.

Added to that were comments by top officials with access to intelligence, including former president Barack Obama, and a CBS 60 Minutes report in which pilots were interviewed about what they saw.

“What is true — and I’m actually being serious here– is that there’s footage and records of objects in the skies that we don’t know exactly what they are,” Obama told “The Late Late Show” on May 17.

“There are a lot more sightings than have been made public,” John Ratcliffe, who was director of national intelligence for the last eight months of Donald Trump’s administration, said on Fox News in March.

“There are instances where we don’t have good explanations for some of the things that we’ve seen.”

Luis Elizondo, who worked on the Pentagon’s UAP investigation and has urged it to reveal what it knows, said some of the sightings suggest extremely advanced technology unknown to humans.

“If the New York Times reporting is accurate, the objects being witnessed by pilots around the world are far more advanced than any earthly technologies known to our intelligence services,” he said in a tweet Friday.

“It’s time to release the full report, videos & data that we’ve seen in the Pentagon.”

Bong Go praises PRRD for approving new round of ‘ayuda’ for majority of residents in NCR to be affected by ECQ
August 3, 2021 People's Journal
SHOW ALL