NASA marks 53 years since the first human stepped on Moon on July 20, 1969. For some people, lunar landing is still a conspiracy whereas many top-notch people came forward to criticize NASA for hiding the truth. Whether or not the Moon is inhabited, there are some photos presented by UFOlogist Bob Dean at Barcelona Exopolitics Summit, on 25 July 2009, that NASA did not want the world to see, as he claimed.

Soon after the news broke out that NASA landed humans on Moon, different conspiracies quickly took over the matter. From a fake landing to aliens on the moon, people were discussing every bizarre thing a human mind could imagine. Then a sudden halt to Apollo missions in 1972 fueled the conspiracies to grow, allowing astronauts, military personnel, NASA workers, etc to discuss about Moon mysteries.

A man named Robert O. Dean, a.k.a. Bob Dean gave a number of interesting lectures, providing a wealth of information about not only the Moon landings and Apollo missions but also corroborating what numerous whistleblowers said in the past.

Bob Dean’s credibility cannot be questioned as he worked at NATO headquarter from 1963 to 1967. He joined the US Army on April 5, 1960, and also served in combat service in Korea and later in Vietnam. He got retired from the army on October 31, 1976, as a Command Sergeant Major. 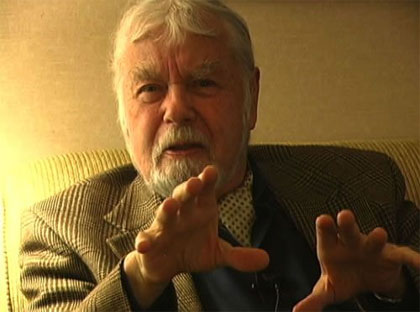 During the Barcelona Exopolitics Summit, on July 25, 2009, Mr. Dean released a set of amazing images. He also explained the Apollo missions, and what astronauts encountered unlike anyone before. He released to the public a set of fascinating images supposedly captured by astronauts of the Apollo 12 mission, including an image showing some mysterious spacecraft several hundred feet in diameter.

During the lecture, Mr. Dean recounted how in the morning of February 2, 1961, World War III almost began, and a fleet of UFOs were to blame. “It appears that on the morning of the 2nd of February 1961, World War III almost started. It was involved in the flyover of large numbers of circular metallic craft, flying in formation, very obviously under intelligent control,” said Mr. Dean.

Mr. Dean continued: “They would fly out of the Soviet sector in the Warsaw Pact toward the U.S. in formation at a high speed and at a very high altitude. They would turn north over the English Channel over the southern coast of England and then they would disappear off of NATO radar over the Norwegian Sea.”

“The Soviets went on red alert. The NATO forces went on red alert. Everybody was, you know … fingers on their triggers, thumbs poised above those red buttons. And World War III was just moments away,” explained Mr. Dean. “Within 20 minutes, it was all over. The objects flew, turned north and disappeared off of radar.”

He claimed that NATO launched a three-year program to investigate the UFOs and find out if they posed a military threat. He received this information from a 1964 NATO report titled “AN ASSESSMENT” (An Evaluation of a Possible Military Threat to Allied Forces in Europe). He said the report was so sensitive that only 15 copies of it were printed. Besides, the report contained in-depth studies of atmospheric physicists, astronomers, astrophysicists, sociologists, historians, and theologians. (Click here to read full the article)

Mr. Dean said: “There had been the case after case of UFO landings, face-to-face confrontations, invitations to come aboard their ships. It had been going on for some years. It has been going on for centuries.” According to him, the report stated that “there apparently was not a military threat because if…[ETs] were hostile or malevolent, the game would have been up a long time ago.” This conclusion sounds similar to the UFO emails sent to John Podesta by Edgar Mitchell, who also called E.T. “nonviolent.”

He further said in the lecture that “They [experts] concluded that the planet Earth and the human race had been under some kind of survey or observation going on for hundreds, if not thousands, of years. They concluded, in 1964, that there were at least four different groups coming here, observing us, surveying us, analyzing us, closely watching us, what we were up to, what we were doing.”

• Bob Lazar Explains How Aliens Use Element 115 To Fly UFOs

• Does This FBI Document Suggest That Nikola Tesla Was An Alien From Venus?

In his 41 years of federal service to the United States, Mr. Dean heard a lot of bizarre things, but the thing that the human race is a hybrid race stunned him. He said: “I’ve learned that we are not merely alone; we have never been alone. We have had an intimate interrelationship with advanced extraterrestrial intelligence from the beginning of our history. And let me tell you that that intimate interrelationship is still going on.”

He continued: “This one race, in particular, apparently reengineered us as a species about 200,000 years ago. What we are here today is what we call homo sapien sapiens — you’re an engineered creature. Your genetics have been manipulated. You’re not the same as what you were and you are not the same as to what your children and grandchildren and great-grandchildren will be in the next hundred years.”

Mocking NASA acronym calling it “Never A Straight Answer,” Mr. Dean in anguish said that the agency erased 40 rolls of film of the Apollo Program: the flight to the Moon, the flight around the Moon, the landings on the Moon, and others. 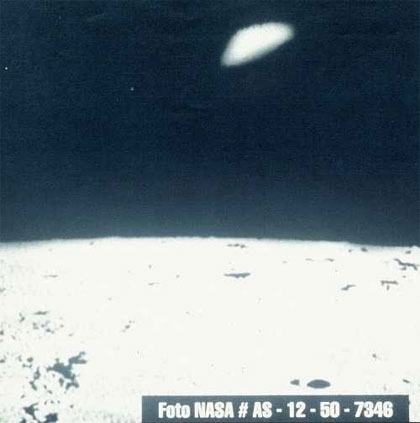 This image (shown above) comes from the Apollo 12 mission, Apollo Systems 12, roll number 50, negative number 7348. A mysterious object was sighted by Apollo astronauts as they were orbiting the moon.

The image seen below was taken by Astronaut Neil Armstrong. While the astronauts were looking out of the window of their little craft, this cigar-shaped object flew by. 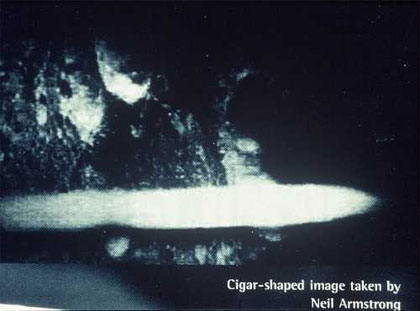 The next image, according to Mr. Dean, shows a mysterious disc-shaped object with several hundred feet in diameter. It was snapped while the astronauts were on their way to the surface of the moon. (Note: This image, which in many ways appears the most spectacular, may have a prosaic explanation: click here to read) 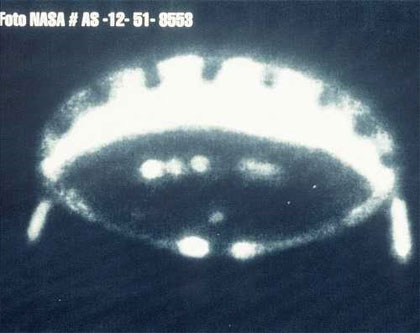 The next two images were taken by Apollo Astronauts when they were overflying the so-called Lansberg crater. According to Mr. Dean, “The astronauts in orbit above the Moon were particularly fascinated by the Lansberg crater. They had been given a special designation to take pictures of Lansberg, because the crater, which they named as the Lansberg, had things going on that were very anomalous. There was construction going on. There were gigantic facilities in the crater up there. So they were specifically delegated and assigned to photograph Lansberg to see if they could figure out what the hell was going on down there. While they were looking at Lansberg, this object happened to express interest in them and flew by. Now this line is an artificial line that was drawn to show you the… it gave the direction that this object was going. This is a good-size object flying past the Apollo Lander.”

Another image of the Apollo 13 “UFO” encounter, as noted by Mr. Dean. 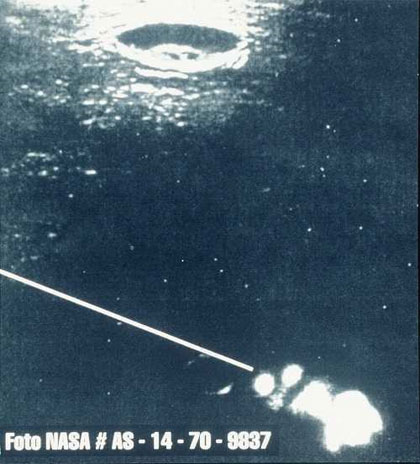 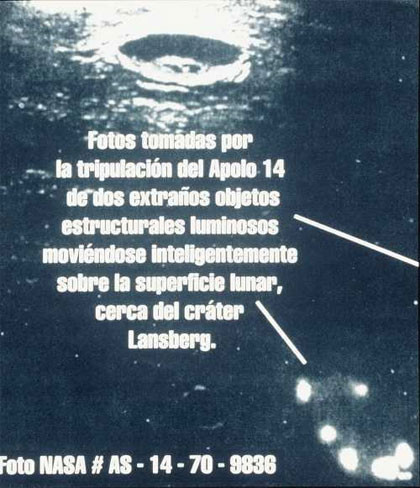 Mr. Dean continued showing evidence gathered by astronauts from the Apollo 13 mission. The below image, as Mr. Dean said, was taken by Apollo 13 astronauts while traveling to the moon when a number of things began happening. Some strange objects were appearing outside the windows of the spacecraft, so the Apollo 13 astronauts grabbed their Hasselblad cameras and started taking pictures of what they encountered. 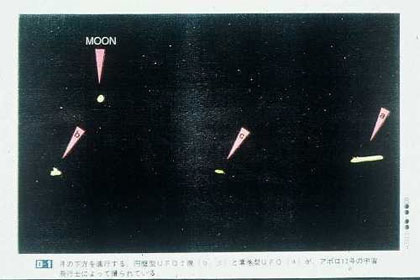 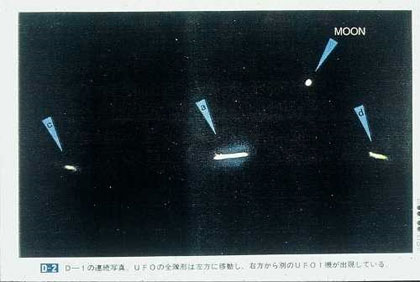 Another image of the Apollo 13 ‘UFO’ encounter, as noted by Mr. Dean.

Such claims and evidence shared by Mr. Dean come with a price. He received harsh criticism from the skeptics’ side, but most opinions shared by people are in favor of Dean, and the majority believes that he was legit. He died on October 11, 2018, at the age of 89 in Tucson, Arizona.

10 Creepy Facts We Learned This Week That Gave Us Goosebumps