PNP, PDEA step up ‘summer offensive’ vs MJ, the most abused drug in PH 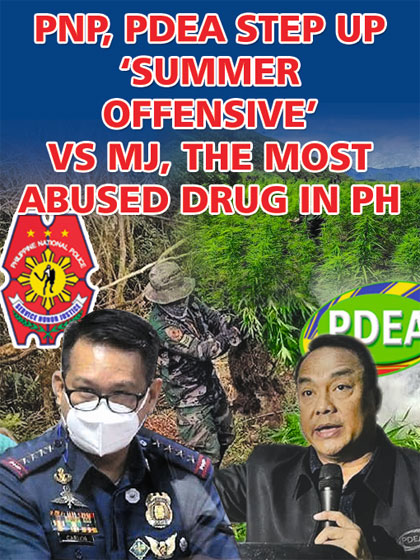 Philippine National Police (PNP) chief, General Dionardo B. Carlos and Philippine Drug Enforcement Group chair, Director General Wilkins M. Villanueva have ordered an intensified ‘summer offensive’ versus all identified marijuana plantation sites in Cordillera region and other parts of the country where the prohibited crop is being grown secretly.

The stepped up campaign against clandestine marijuana sites is underway as Villanueva revealed that cannabis has dislodged shabu as the most abused illegal drug in the country, thus the need for law enforcement agencies to partner with each other in cutting off clandestine production of cannabis in Cordillera region and other parts of Mindanao and Visayas regions.

In turn, Gen. Carlos said he has ordered an intensified ‘summer offensive’ versus secret marijuana plantation sites in the country specifically those located in the Cordillera region which remains the top producer of cannabis being sold in The Philippines.

The top cop particularly ordered Cordillera Police Regional Office director, Brigadier Gen. Ronald O. Lee and the PNP Drug Enforcement Group led by Brig. Gen. Randy Q. Peralta to lead the crackdown against marijuana sites in the region to prevent their transport to Metro Manila and other parts of the country as well as the possibility that revenues earned from cannabis cultivation could be used to finance the candidacy of some local candidates in the May 9 polls.

Gen. Carlos has commended the Cordillera police force for making a huge stride in the campaign, citing the series of marijuana eradication drive in the region since last February which resulted in the destruction of nearly P1 billion worth of fully-grown marijuana plants and seedlings as well as cannabis bricks and marijuana oil.

The official said their ongoing ‘search-and destroy’ operations against marijuana plantations in the region have also scored a 1st in recent years: the arrest of the three armed cultivators of the prohibited crops.

“This is the first time in recent history that we have arrested three marijuana cultivators who were also armed with guns,” the Cordillera police director said.

The official said that suspects Peter Bagtang, 22; and Langao Bagtang,70; as well as a 17-year-old relative were arrested in Mount Bitullayungan in Barangay Butbut Proper in Tinglayan, Kalinga February 28.

Section 16 of RA 9165 which refers to the ‘cultivation of marijuana, opium poppy and other plants classified as dangerous drugs or are sources thereof– carries the penalty of life imprisonment and a fine of as much as P10 million upon conviction.

The PDEA chief cited the seizure of huge bulk of dried marijuana leaves in the country as the reason why they are unafraid to claim that locally-grown cannabis has dislodged shabu or the so-called ‘poor man’s cocaine’ as the top favorite of Filipino addicts.

“Marijuana is now the dominant drug in the country as shown by the massive volume seizures in 2021 and the survey result of the Dangerous Drugs Board (DDB) in 2019,” said Villanueva.

According to the top PDEA official, the illegal hemp got the lion’s share by registering 83 percent of the reported total bulk weight of drug seizures in 2021, and coming as a distant 2nd is shabu at 17 percent.

He also cited the DDB survey which showed that marijuana is the most commonly abused dangerous drug with 37 percent of those interviewed claiming to have smoke the illegal weed followed by shabu with 35 percent.

In 2021, more than 11 tons of marijuana were confiscated- one of the highest consolidated volumes of marijuana seizure ever recorded. The cannabis plants were uprooted and destroyed mainly in secret cannabis plantations by members of the PDEA and the Cordillera police force.

“This may indicate two things: interception and enforcement efforts are efficient; and cannabis cultivators and distributors are ramping up their drug trafficking activities to meet surging demand,” Villanueva said.

He explained that one of the attributing factors why marijuana rose to the top spot is because of the persistent demand for the use of the controlled plant even amid the pandemic.

Majority of the marijuana users belonging to the younger generation do not perceive the drug as harmful but rather beneficial, placing them at greater risk associated with its chronic use.

“There is a growing acceptance in the marijuana drug business, and it is prudent to come up with an assessment that the supply is abundant because its demand in the market is high. When the supply is higher, the chances of detection is also higher as manifested by the high-volume marijuana confiscation by authorities,” Villanueva explained.

Marijuana plant thrives in high altitude and mountainous areas of the country, and remains to be the only illegal drug locally produced for domestic consumption. Majority of the marijuana plantation sites eradicated can be found in the tri-boundaries of Ilocos Sur, La Union and Benguet.

The ease of cultivating marijuana is critical for this drug to thrive in the illegal drug trade, the PDEA chief said.

Unlike shabu, marijuana does not require precursors, huge labor and technical expertise. Instead, cultivators need seeds and plantation sites. Marijuana growers can leave their fields only to return during harvest time, “Villanueva said.

On the other hand, some reports indicated that local marijuana cultivators are exporting premium-grade marijuana to other neighboring countries. This bold move is likely to boost sales and expand new markets.

The lack of alternative means of earning a living remains one of the chief reasons why local farmers opted to cultivate marijuana. They receive much more income compared to growing other legal crops.

The increase in seizures and arrests of drug personalities related to marijuana have increased coincidentally with the easing of enforcement and regulation on the marijuana production, distribution and use by other countries, particularly in the United States and Europe.

In local setting, the situation abroad influences local growers to ramp up their marijuana production.

The domestic supply of synthetic drugs like shabu and ecstasy are sourced abroad which implies the effectiveness of the government’s supply-reduction measures., the official said.

Only marijuana cultivation remains to flourish considering the very high incentive that cultivators get and the difficulty in fully detecting the plantation sites,” he stressed.

“There is no ground for complacency. Although shabu is no longer the preferred drug of use, it is still considered a top drug of concern due to its more damaging effect on the minds and lives of its users, and is more profitable to drug players,” Villanueva said.

“Now that marijuana is the top choice of users, we should exert more effort in advocacy-centered strategies down to the grassroots level to dispel the misconception that the plant is harmless, especially among the younger generation,” the PDEA chief added.

Russia in Ukraine: An embarrassment for the West