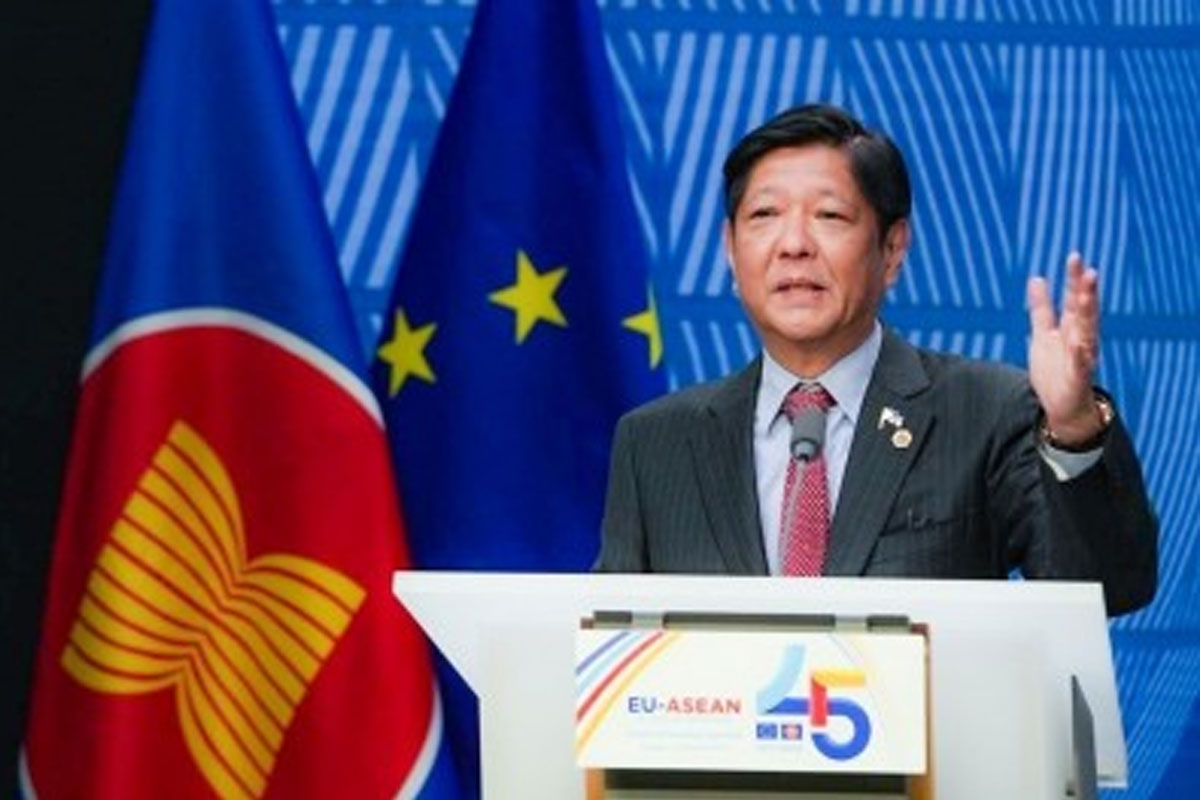 ELEVATING ASEAN-EU TIES — President Ferdinand R. Marcos Jr. on Wednesday (Dec. 14, 2022, Brussels time) vows to elevate the relations between the Association of Southeast Asian Nations and the European Union will reach greater heights. Marcos made the commitment in a press conference held at the conclusion of the ASEAN-EU Commemorative Summit plenary in Brussels, Belgium. Photo courtesy of the Office of the Press Secretary
Nation,

This, as Marcos hoped to achieve more milestones amid the Philippines’ role as country coordinator for ASEAN in its dialogue relations with the EU until 2024.

“I assure my fellow ASEAN Member States and all European Union Member States that the Philippines will continue to expend all efforts available to ensure that the implementation of the Plan of Action to Implement the ASEAN-EU Strategic Partnership for 2023-2027 proceeds as intended,” he said in a press conference held at the conclusion of the ASEAN-EU Commemorative Summit plenary.

Marcos said the holding of the ASEAN-EU summit signifies the two parties’ broad relations and clear commitments to further enhance their ties.

Marcos also sought to improve ASEAN-EU cooperation in digital transformation, emphasizing the need for connectivity “in all manners — by air, by land, by sea, by digital means.”

“We also will work for the digital transition, and the lessening of the so-called digital divide, migration, and gender justice,” he said.

Marcos said he is also optimistic about the resumption of negotiations for the establishment of an ASEAN-EU Free Trade Agreement and the ASEAN-EU Trade and Investment Work Programme to achieve post-pandemic recovery.

He issued the statement, as he stressed EU’s vital role in ASEAN’s pandemic response efforts.

Marcos also acknowledged the strengthened cooperation between the two regions amid the pandemic through various mechanisms, including the ASEAN Regional Integration Support from the EU Plus (ARISE+) and the Integrated Programme in Enhancing the Capacity of AHA Centre and ASEAN Emergency Response Mechanism.

He also cited the signing of the ASEAN-EU Comprehensive Air Transport Agreement in October and the adoption of the Plan of Action to Implement the ASEAN-EU Strategic Partnership for 2023-2027 as among the two regional blocs’ achievements.

“I am pleased that today’s Summit imbued all of us as ASEAN and EU leaders alike with a sense of renewed commitment to continue nurturing and expanding our unique ASEAN-EU partnership which will serve us well as we are squeezed by the myriad challenges that we have just discussed,” Marcos said.

In his speech during the ASEAN-EU Commemorative Summit, Marcos vowed to sustain the “successful and vibrant” relations between the two regions.

He also called for ASEAN and EU member-states’ support and cooperation as they chart new paths to further strengthen their partnership. Philippine News Agency