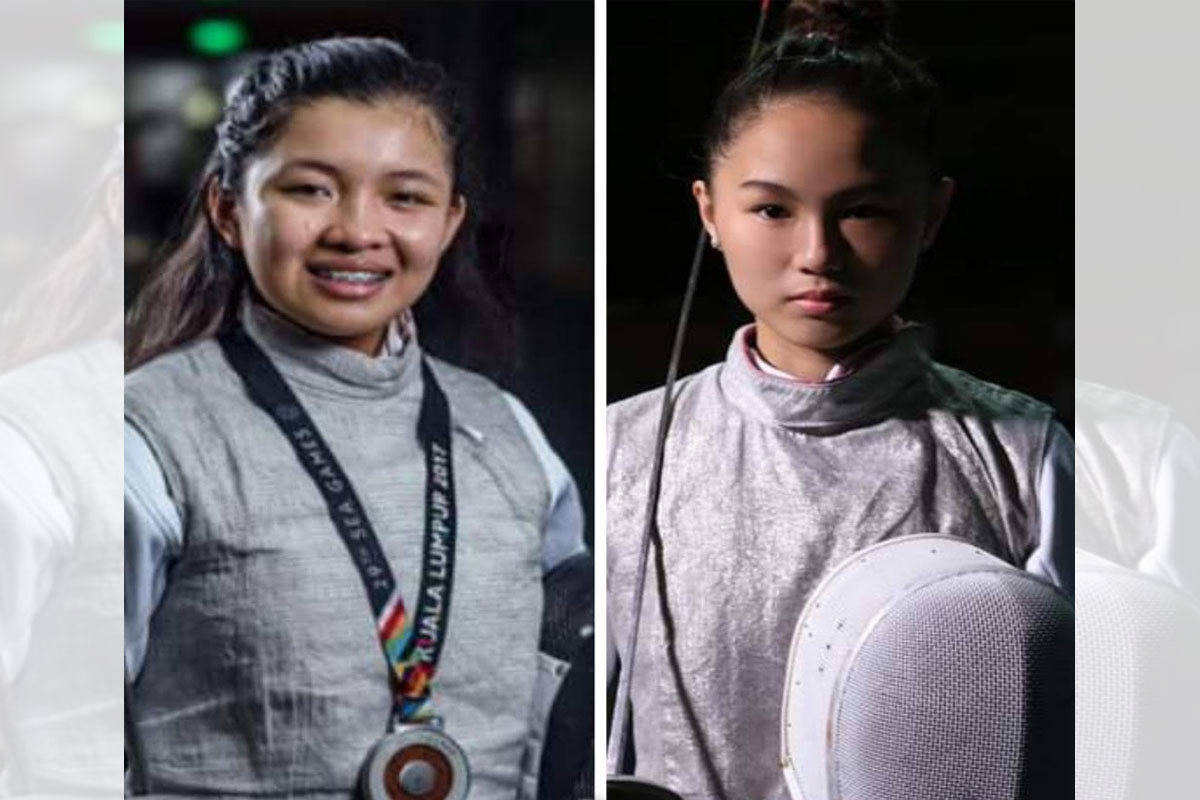 Catantan (left) and Esteban
Other Sports,

IF STAR Cinema wanted to make a movie on the lives of fencing champions Samantha Kyle Catantan and Maxine Esteban, there’d be no need to get the most good-looking actresses in showbusiness to potray their roles.

They are just as beautiful and talented as most showbiz royalty.

They look as if they had just stepped out of a pictorial at the ABS CBN Studio in Quezon City and not at the fencing hall of the World Trade Center in Pasay City.

But Catantan and Esteban are more than just pretty faces in the beautiful sport of fencing.

The two are also the country’s brightest hopes for gold medals in fencing in the coming Southeast Asian Games in Hanoi next year and beyond.

And they, like the rest of the members of the national fencing team under Philippine Fencing Association president and Ormoc City Mayor Richard Gomez and coach Amat Canlas, are leaving nothing to chance as they go for the gold in the SEA Games and other international competitions next year.

“We can’t promise winning the gold medals in the SEA Games, but we can assure everybody that we’re training like crazy to be in our best shape when the time comes,” chorused Catantan and Esteban during the People Sports Conversations presented by the Philippine Sports Commission (PSC) last Nov. 25.

Catantan and Esteban, who are both deep in training with the best fencers in the United States, believe the Filipinos have a good chance of duplicating, if not surpassing, their achievements in the 2019 SEA Games in Manila.

“Personally, I think we have already improved a lot since the SEA Games. That’s really the goal of the team. Always aim high,” claimed Catantan, who was named as Most Valuable Player following her memorable stint for Penn State University in the recent US NCAA Fencing Championship in Pennsylvania.

The 19-year-old student-athlete from Quezon City finished third in the women’s individual foil event of the 2021 Asia Oceania Fencing Olympic Qualification Tournament, in Tashkent, Uzbekistan last April, but failed to make it to Tokyo.

A heart-breaking 10-25 defeat to top seed Yana Alborova of Uzbekistan in the semifinal ended her Olympic dream.

“I know I can compete with other fencers, as shown in the recent Olympic qualifiers. It really boils down to who’s more confident,”claimed Catantan, who amassed a remarkable 24-5 record in her freshman season and emerged an All-American in the foil during the shortened 2020-21 campaign.

As they say, if you want to be a champion, act like a champion,” said the former top fencer of University of the East.

Esteban, for her part, said she is looking forward to represent the country again in the coming SEA Games.

“For me, I think nag-improve na talaga ako, especially after my training in Italy for more than four months,” claimed Esteban, a member of the Phippine team which bagged the bronze in the women’s team foil event in the 2019 SEA Games.

Esteban, who also competed as a figure skater in both the local and international levels, said she is also fast getting her groove back.

“The first two years of college, sobrang busy talaga sa school. This pandemic also helped me become stronger physically and mentally. But we know we can’t stop training and try to improve. We always have to consider na while we are improving, ang mga kalaban nag-i-improve din sila,” said Esteban, who counts the UAAP Season 81 Rookie of the Year and Most Valuable Player awards for women’s fencing as among her biggest achievements.

“That’s why I’m really happy with our renewed confidence and improvements as a team. I’m happy that Sam and I were also able to set the bar through our international competitions. I hope there would be a lot of younger fencers in the future.”

Both Catantan and Esteban have been given the green light by the national fencing association.to continue their training abroad in preparation for the SEA Games and other international competitions next year.

“We don’t want to promise anything, like winning the gold medals. But we promise to do our best and train as hard s we can. We will not disappoint,” stressed Catantan and Esteban.