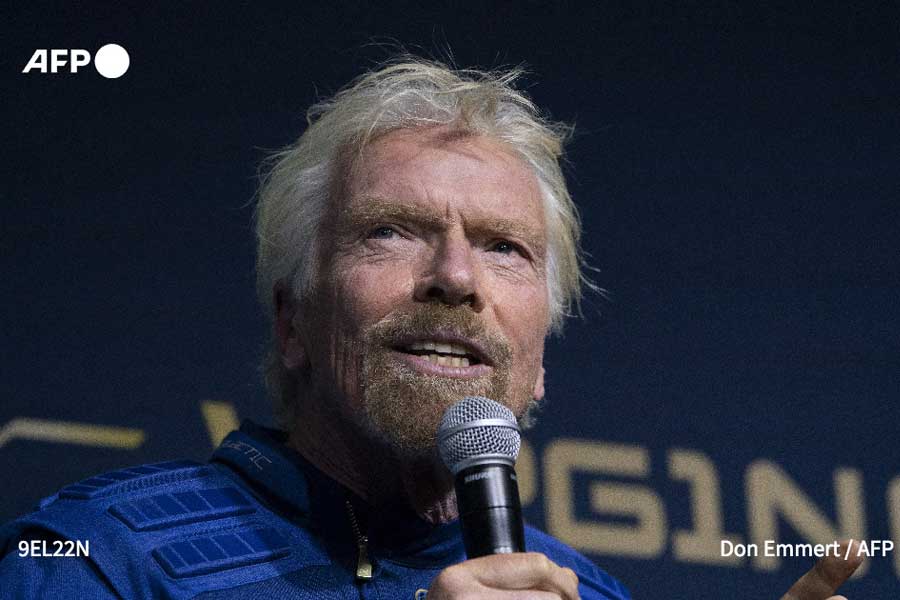 AFP, Julu 12, 2021 — British billionaire Richard Branson flew into space Sunday aboard a Virgin Galactic vessel, a voyage he described as the “experience of a lifetime” — and one he hopes will usher in an era of lucrative space tourism.

The mission’s success allowed the swashbuckling septuagenarian to one up fellow tycoon Jeff Bezos — who owns space company Blue Origin, and is set to launch on July 20 — in the race to the final frontier.

Branson, three fellow passengers and two pilots (all Virgin employees) breached the US-recognized boundary of space, reaching an altitude of 53.5 miles (86 kilometers) and experiencing weightlessness for a few minutes aboard the VSS Unity.

The rocket-powered Unity achieved a top speed of Mach 3 as it soared to space.

The patchy video transmission was the only blemish on an otherwise drama-free flight, and more inflight footage is expected to be released later on.

“I promise lots of chocolate,” he joked, comparing himself to the beloved Roald Dahl character.

Several tourists journeyed to the International Space Station in the 2000s, but on Russian rockets.

The 70-year-old founder of Virgin Group, which today has interests in everything from commercial aviation to fitness centers, is known for his appetite for adventure and has set world records in hot air ballooning and boating.

Since then, VSS Unity has successfully reached space three times, in 2018, 2019 — which included the first crew member who wasn’t a pilot — and finally in May this year.

Financed largely by the state of New Mexico, Virgin Galactic is the principal tenant.

After Sunday, Virgin Galactic plans two further flights, and then the start of regular commercial operations from early 2022. The ultimate goal is to conduct 400 flights per year.

Branson hopes to expand that through the competition for free tickets, “so lots of people who couldn’t otherwise have afforded to go to space, go to space.”

Bezos, the richest person in the world, is due to fly nine days from now on Blue Origin’s New Shepard rocket.

The principal point: New Shepard climbs up to more than 60 miles in altitude, thus exceeding what is called the Karman line, the frontier of space according to international convention.

“Can’t wait to join the club!” he wrote.