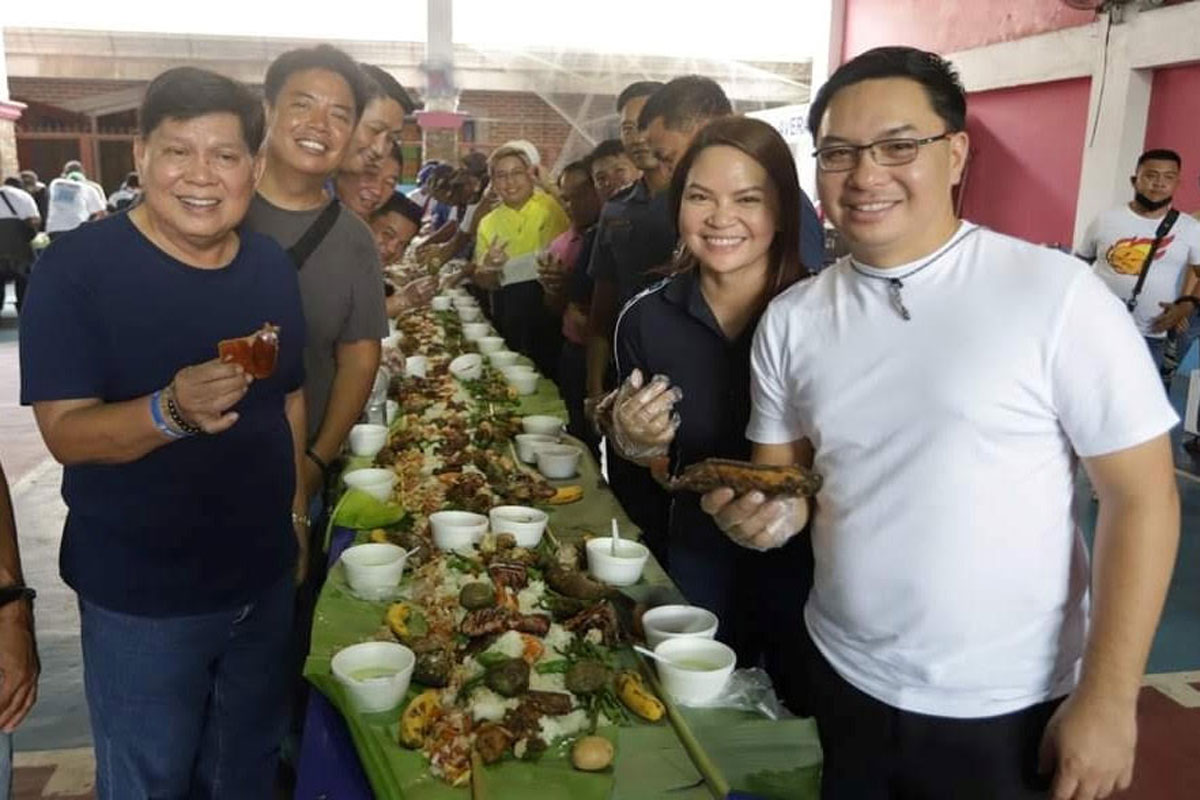 BOODLE FIGHT. The Talavera municipal government hosted a boodle fight to honor the men in uniform for their successful handling of the peace and order situation in their locality during the election period. Photo by Steve A. Gosuico
Provincial,

CABANATUAN CITY – In Nueva Ecija, holding “boodle fights” have become a simple gesture to express thankfulness and show appreciation to the “men in uniform” for rendering selfless service towards achieving a “Secured, Accurate, and Free/Fair National and Local Elections 2022” (SAFE 2022) in the province.

While this Filipino tradition of eating with bare hands originated from the Philippine military to symbolize camaraderie, brotherhood, and equality, the Nueva Ecija Police, headed by Acting Provincial Director Col. Jess B. Mendez, resorted to hosting a boodle fight to pay tribute to his command group and staff for successfully steering Nueva Ecija to having “one of the most peaceful elections ever held in the province with zero casualties recorded in terms of a slain candidate, supporter, watcher, barangay officials or teacher during the election period.”

It would be recalled that during his assumption as the new provincial director (PD) back on January 9, 2022, which was the official start of the 150-day nationwide election gun ban, Mendez mentioned that his performance during the elections would define his overall stint here as the province’s top cop.

During the boodle fight held at the NEPPO (Nueva Ecija Police Provincial Office) gym on May 30 last Monday, Mendez also honored members of the Special Action Force (SAF) for their contribution to the NEPPO’s peace-keeping efforts during the polls.

In another boodle fight hosted by the Talavera municipal government last Tuesday, the outgoing Mayor and Vice Mayor-elect Nerivi Santos-Martinez and her younger brother Liga ng Barangay president and now Mayor-elect Nerito “JR” Santos Jr. honored the local police and the barangay tanods for their dedication and contribution during the elections.

As a gesture of their appreciation, Santos Jr. also distributed free mobile phones to each barangay tanod and chiefs for accessible communication and quick response to emergencies during their duties.

It was learned that more than 2,700 personnel from the police and military were deployed during the elections in Nueva Ecija with 232 soldiers coming from the military as augmentation troops, 32 each from the SAF and the RMFB, 289 from the PNP Training Schools, 1,502 from NEPPO at two men deployed per polling center and a quick reaction team per city and municipality from the two provincial mobile force groups, and an advance command post per district for all the province’s four districts.