﻿PNP-CIDG Director Brigadier General Ronald O. Lee briefs the press on the neutralization of a gang of ‘gay kidnappers’ believed to have kidnapped at least 14 Asian targets in Metro Manila since 2018.
Metro, 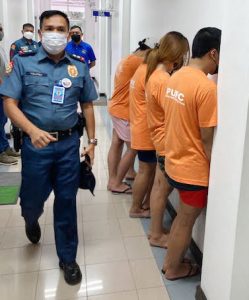 “In my nearly 30 years in the law enforcement service, this is the first time that I have encountered an organized crime gang with ‘transgenders’ for a leader and members,” said PNP-Criminal Investigation and Detection Group (PNP-CIDG) Director Brig. Gen. Ronald O. Lee.

The official said five members of the so-called “Warla Criminal Group” who have been under the radar of the PNP-CIDG have been arrested and charged in court. At least three others are still being hunted for their purported involvement in the kidnapping-for-ransom (KFR) of at least 14 Asian nationals, including Chinese, Taiwanese, and Japanese businessmen, since 2018.

All are believed to be engaged not only in KFR but also in gunrunning activities, he added. “Warla” is a gay lingo for “war” and “loka-loka”.

The suspects are believed to have amassed an estimated more than P6 million from their victims, who are mostly asked to produce a minimum of P300,000 ransom for their release.

Accordingly, the suspects are asking the ransom money to pay for their sex reassignment procedure or sex transplant, which costs around P450,000 to P500,000, according to CIDG.

Azurin commended the CIDG National Capital Region Field Unit (NCRFU) and officers from the PNP Anti-Kidnapping Group (PNP-AKG), the NCR Police Office (NCRPO), and their counterparts from the Armed Forces who helped bust the crime ring which has given the country a bad image abroad.

He also thanked the Taiwanese national who fully cooperated with investigators to get his abductors and other concerned citizens who helped us crack this case.

Taiwan Police Attache Charlie Wu said the “PNP did a great, professional and efficient job to rescue our kidnapped Taiwanese victim, Michael Lee, in a timely manner” and arrested four of the kidnappers.

“I am also glad to be part of this team to provide what the PNP needs to solve the said kidnapping case. I am convinced that working together is the best way to bring our criminals behind bars,” the Taiwan police official based in Manila said.

The suspects’ arrest came after the CIDG-NCRFU headed by Col. Hansel M. Marantan investigated a report last September 3 that a Taiwanese national named Michael Lee was abducted by a group of unidentified men near the vicinity of SM BF Homes in Parañaque City.

During the investigation, the CIDG NCRFU discovered that the kidnappers called the victim’s friends to demand money for his safe release. The kidnappers managed to get a total of P310,000 from their captive’s friend—the money was sent through GCash transactions before they decided to release the victim.

The Taiwanese national, who the CIDG-NCRFU safely recovered, fully cooperated with investigators and provided leads that allowed the CIDG to identify some suspects.

Authorities received information that the suspects, led by alias “Mike Ebol” have been in the illegal business since 2016. However, their presence was only discovered when they seized the Taiwanese national before releasing him last September 7.

The CIDG-NCRFU investigation showed that the kidnappers started calling their hostage’s friends last September 5 to demand ransom. The ransom payment was made thru the GCash account given by “Ebol”.

After getting the money, the kidnappers hired a Grab driver to bring the Taiwanese to his apartment in Barangay 198 in Pasay City last September 7, where the CIDG men found him safe.

A series of follow-up investigations and operations led to the identification of several persons involved in the GCash transactions. When they were accosted at the Centennial Village in Taguig City, the persons revealed that their SIM cards were brought by Ebol thru his cousin.

Last September 12, the PNP-AKG, which took cognizance of the case, filed criminal charges for violation of Republic Act 1084 or kidnapping and serious illegal detention against Ebol and his cohorts before the Department of Justice (DOJ).

However, the investigation did not end with the filing of the criminal charges against the suspects, said a PNP-AKG official, Col. Frederick Obar.

Another follow-up operation last September 23 led to the arrest of another suspect.

The last buy-bust operation along the Mamali Compound in MLQ Road, Lower Bicutan, Taguig City, led to the arrest of two more suspects.

All suspects were positively identified by the Taiwanese national as among the suspects who abducted him.

As a result, the arrested suspects were charged with violation of Republic Act (RA) 10591 or the Comprehensive Firearms and Ammunition Regulations Act of 2013 before the Office of the City Prosecutor in Taguig and Makati City, respectively.

It should be noted that they are facing the more serious charge of kidnapping and serious illegal detention. Under RA 1084, any private individual who shall kidnap or detain another, or in any other manner deprive him of his liberty, shall face the maximum penalty of life imprisonment if the kidnapping or detention shall have lasted more than five days.