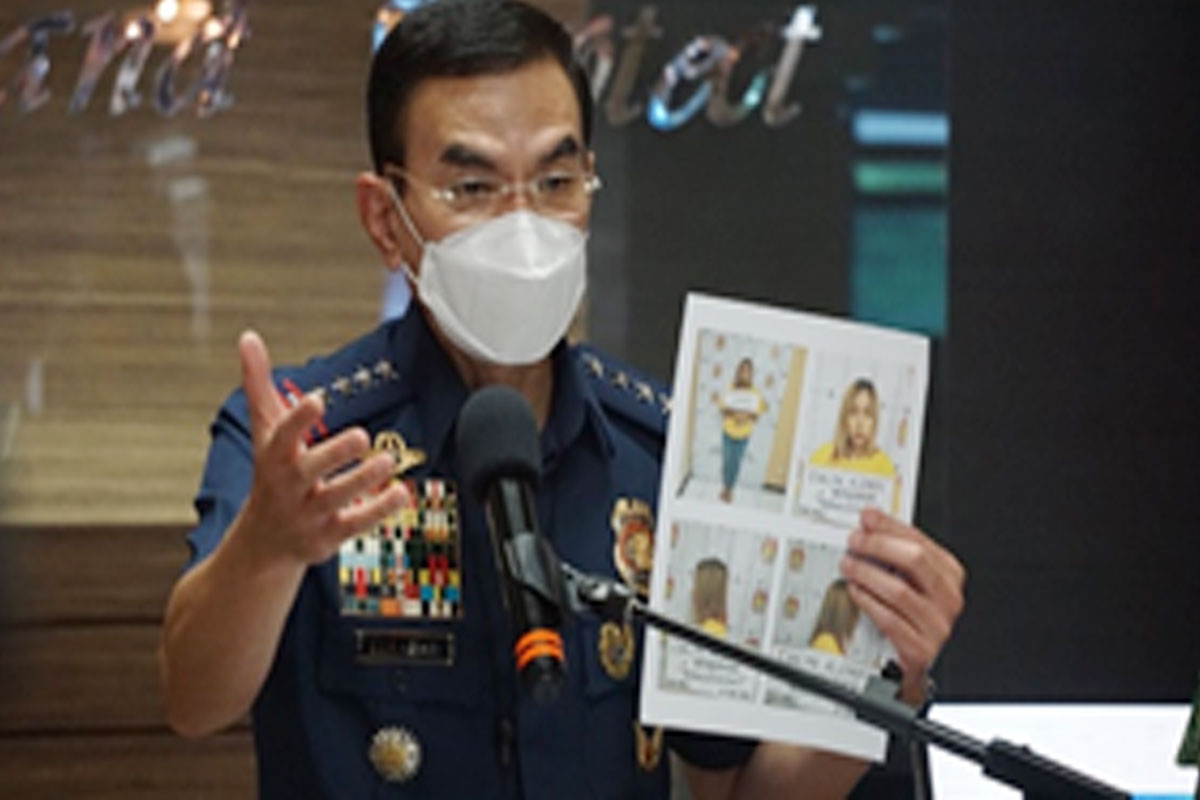 PNP chief, General Guillermo Lorenzo T. Eleazar gestures as he presents to the media the mugshots of a woman arrested for demanding money from PNP applicants with the promise of a hassle-free entry into the force.
Nation,

PHILIPPINE National Police (PNP) chief, General Guillermo Lorenzo T. Eleazar on Friday announced the arrest of a 35-year-old woman accused of demanding huge amount of money from PNP applicants and promising them they a hassle-free entry into the force.

The top cop said the suspect identified as Mrs. Evalyn Aleman alias ‘Eva Fonda,’ a resident of Mauling Creek, Lower Bicutan, Taguig City working as an ‘agent’ of a major lending institution in the country, is now facing charges for robbery-extortion.

The suspect was arrested by members of the Counter-Intelligence Division of the PNP Integrity Monitoring and Enforcement Group (IMEG) under Brigadier Gen. Thomas R. Frias Jr. and the PNP Anti-Cybercrime Group (ACG) under Brig. Gen. Robert T. Rodriguez during an entrapment operation in front of the Department of Science and Technology building along General Santos Avenue in Upper Bicutan 9 p.m. Thursday.

Recovered from the possession of the suspect were P30,000 worth of boodle money topped by two marked P1,000 bills.

Eleazar said the sting was conducted amid information gathered by the IMEG and the ACG that the suspect is demanding P30,000 each from PNP applicants promising they would easily pass the PNP recruitment process.

The arrest of the woman came just hours after Eleazar led the official nationwide launch of their ‘Nameless, Faceless’ recruitment program under the new normal which he said will ensure there will be no more ‘padrino, palakasan or bata-bata’ system when it comes to recruiting rookie members of the force.

The Comprehensive Online Recruitment Encrypting System or CORES is meant to finally eradicate influence-peddling in the organization and will ensure that new members of the force will make it to the PNP on their own and not thru the help of influence-peddlers including politicians, retired generals and other VIPs.

Under this recruitment scheme, a QR Code System will be used to ensure the concealment of the identity of the applicant. Only the applicant’s qualifications will be evaluated in determining if he/she will be accepted in the police force.

“We will only accept those police applicants who are most qualified and most deserving. Only the best for the PNP. Walang mukha o pangalang lalabas habang ongoing ang application process at tanging ang credentials niya lamang ang pagbabasehan kung siya ba ay tanggap sa PNP,” he added.

Eleazar said that cases of rogue policemen like Corporal Moises Yango, a 29-year=old Quezon City policeman who was arrested for robbing an LBC branch in San Miguel, Bulacan on Monday as well as the more than 5,000 erring cops who were dismissed from the PNP since 2016 is the main reason why he wants an honest-to-goodness recruitment system.

The head of the PNP Recruitment Service, Colonel Ma. Leonora Camarao presented to Eleazar the start of the program where applicants and the screening officers observe minimum health standards at Camp Crame.

Camarao said they are not only getting criminologists but are also interested in getting applicants with solid background on IT and medicine-related courses. A lawyer, Camarao also thanked the PNP Information Technology Management Service and the PNP Directorate for Information Communications and Technology Management respectively headed by Brigadier Gen. Daniel C. Mayoni and Brig. Gen. Alexander J. Sampaga for giving their all-out assistance to the PNP comprehensive recruitment system.

In 2020, Camarao said more than 20,000 college graduates applied to become members of the PNP despite the pandemic although only 14,208 of them became policemen.