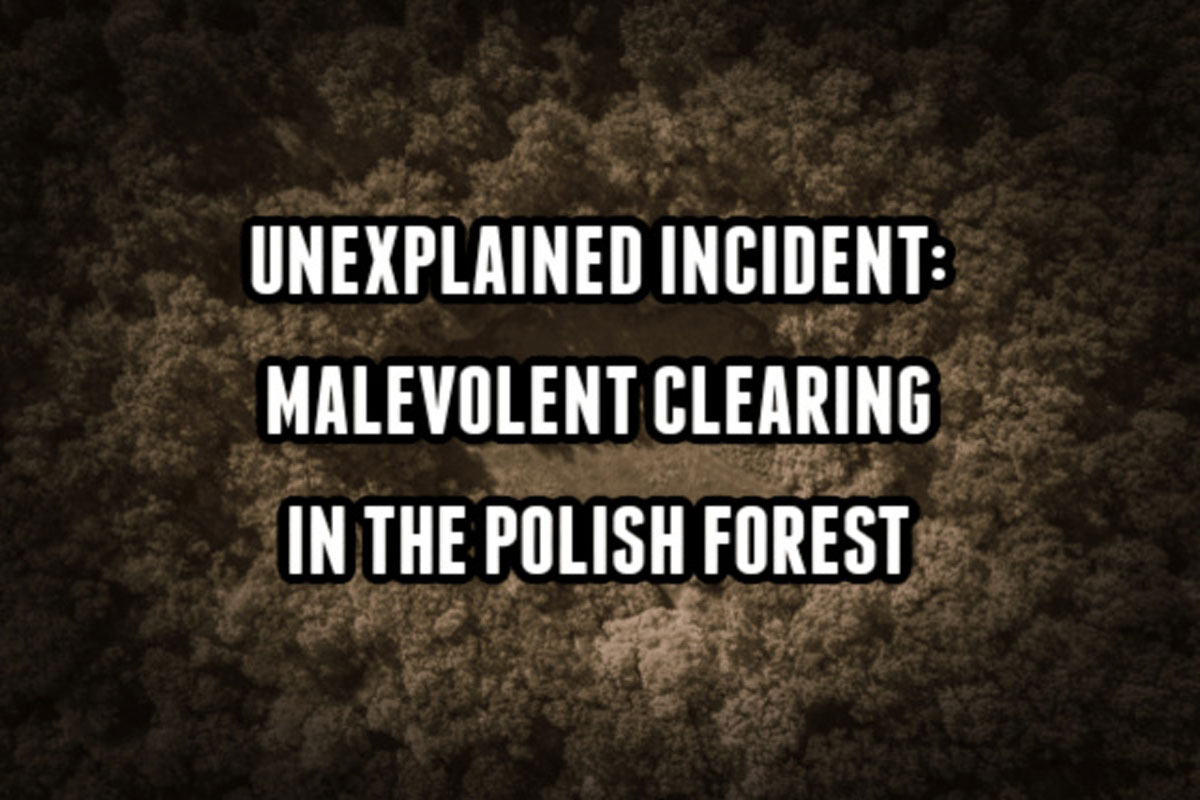 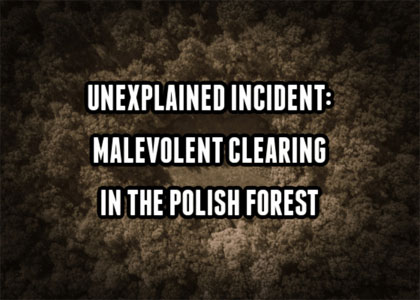 A Polish man retells a frightening account told to him by his grandma. When she was a girl, she walked into a supernatural forest where a malevolent circular clearing beckoned her to enter

The following account was forwarded to me by Kyle & Cam at Expanded Perspectives:

“I always wanted to send you some paranormal stories from my family that I have gathered. However, I was always worried that I won’t be able to write them, as English is not my first language. I will try my best.

As I said, I like to gather paranormal stories from my family members. I have a lot of them and some are really disturbing. But this one is the oldest one I heard. It happened to my grandmother just after the 2nd World War in the autumn of 1945 in Poland. My grandmother was 14 years old.

Now, few words about where it happened. My grandmother, when telling the story, always thought that it was very relevant and linked to the history of this place. My grandmother lived and still lives in a very small village in Poland. It has only about 900 inhabitants now, but when it happened it was probably a bit more. 1000 maybe.

The village is located around a huge old forest. There was a monastery there during Medieval times, on the hill at the edge of it, but it was destroyed by fire. That’s a historical fact and there are documents describing the event, but no one is sure where exactly the monastery stood. Most likely now, the forest consumed it when it was spreading through hundreds of years of growth. As a very religious person, my grandma thinks what happened to her is associated with the monastery and its unusual history. The locals believe that the monastery was actually destroyed by God himself in rage because the monks used to sin with female monks and perform satanic rituals. Of course, that’s just a legend and there are no facts to support this.

In the early autumn of 1945, the country was destroyed by war, first by the Germans and later by the Soviet counterattack. Food was scarce.

Polish people love picking up mushrooms and nowadays it’s like a family pastime to spend time together and enjoy nature. At the time, it was also necessary to survive. Mushrooms were a source of food that was lacking. And so, my Grandma went to the forest in search of mushrooms to cook and eat.

It was just a normal day. Walking around the forest, looking for mushrooms, when she found herself standing at the edge of a circular field of grass in the middle of the forest. She noticed that the field was a perfect circle of about 15 maybe 20 meters in diameter. She described it as the most perfect circle. The trees around were growing in a perfect line. Not even one branch was reaching towards the interior. The circle was full of green short grass.

The other worse thing was the feeling she got. She felt something really evil coming from the field and she could feel that, whatever it was, it was desperate to lure her into the field. It wasn’t like she could hear this thing talking. No, no. It was just the feeling in the air. Something very malicious was desperate to make her go inside this circular grassy field to do something bad. And again, it was angry and desperate, like its very existence depended on this.

Grandma was, of course, very scared and understood that she has to walk away and no matter what, she could not enter the field. So she turned and started to walk away. After a short stroll, she moved through some dense bushes and…there she was. Standing again in the very same place at the edge of the grassy field. It was the exact same place. It wasn’t like she walked around and was on the opposite side of it. It was exactly the same spot. She could see the grass bent previously by her feet. The exact same trees around.

Now, she also felt that, whatever it was, it was getting angry and more impatient to lure her inside the field. She turned exactly 180 degrees away from the field and made sure to walk in a perfectly straight line through the forest away from the field. It didn’t work. She was on the very same spot again. She tried 2 or 3 times more, but every time with the same result. Walking away in a straight line, moving through thick trees and bushes to end up standing in the very same place.

The presence in the field was getting angrier. I asked my grandmother, many times, how could she know that. She couldn’t explain it. It was just something she felt in the air. Big evil presences with very malicious intent being desperate to let her into the field to do something bad to her, like its very existence depended on it.

Grandma was getting desperate. She knew there was no escape, so she did the only logical thing she thought she could do at the time. She sat on the edge and started praying to God to save her. After some long time crying and praying, she hears a distant sound behind her. A sound of a cow. It was very far but due to the complete silence and lack of other sounds very clear. A cow far away.

She rose to her feet listening. There it was again. She started to walk towards the sound still praying. The sound was rare but repeating. With each step, she could hear it was getting closer. Unlike before, with her many attempts to leave the circular field, only to come upon it again and again. This time she was making some actual progress. She was still walking and could tell she was getting closer and closer to the cow. She assumed there must be another field or meadow and the cow must be in it outside of the forest.

Then she could hear the cow very clearly. It couldn’t have been more than 4 meters away now.

As she pressed on, she came upon a clearing form between the trees. She started to run those few last steps to hear this cow. She could clearly hear it, despite all of the other sounds still being completely silent. She burst out of the forest into another field or pasture. A clearing.

Suddenly all the sounds were back like someone plugged it in again. She was standing in a pasture with the fields and the village below the hill. All the sounds were back. The wind, the birds, and insects. All except the cow. There wasn’t any. The meadow was empty. She looked back thinking that the cow might have entered the forest, but didn’t see it. She didn’t dare go back into the forest to look for it and she ran back home.

Now, my grandmother believes that what happened was somehow linked to the monastery with sinful monks and it was God who saved her hearing her prayers. She is a religious person so she also believes that whatever it was in this field, it had to be the devil. She said that later she thought that it had to be trapped there for centuries and looking for someone to possess so it could be free.

I’m not a religious person so I don’t know what to think of it. Was it some spirits, bad energy, different dimensions? I don’t know. I know that the story is true she wouldn’t make it up.

My grandmother went back to the forest many times. But always felt scared remembering what happened on that day. I also went there numerous times without any experiences, but that forest, in particular, saw a lot of death. There were heavy flights there during the war and its a very popular place to commit suicide, not only by the locals but also people who come there from around the country.

Thank you for your time reading the story.” Gabriel

Dark Rituals, Brainwashing, and the Bizarre Case of the Satanic Day Care Center