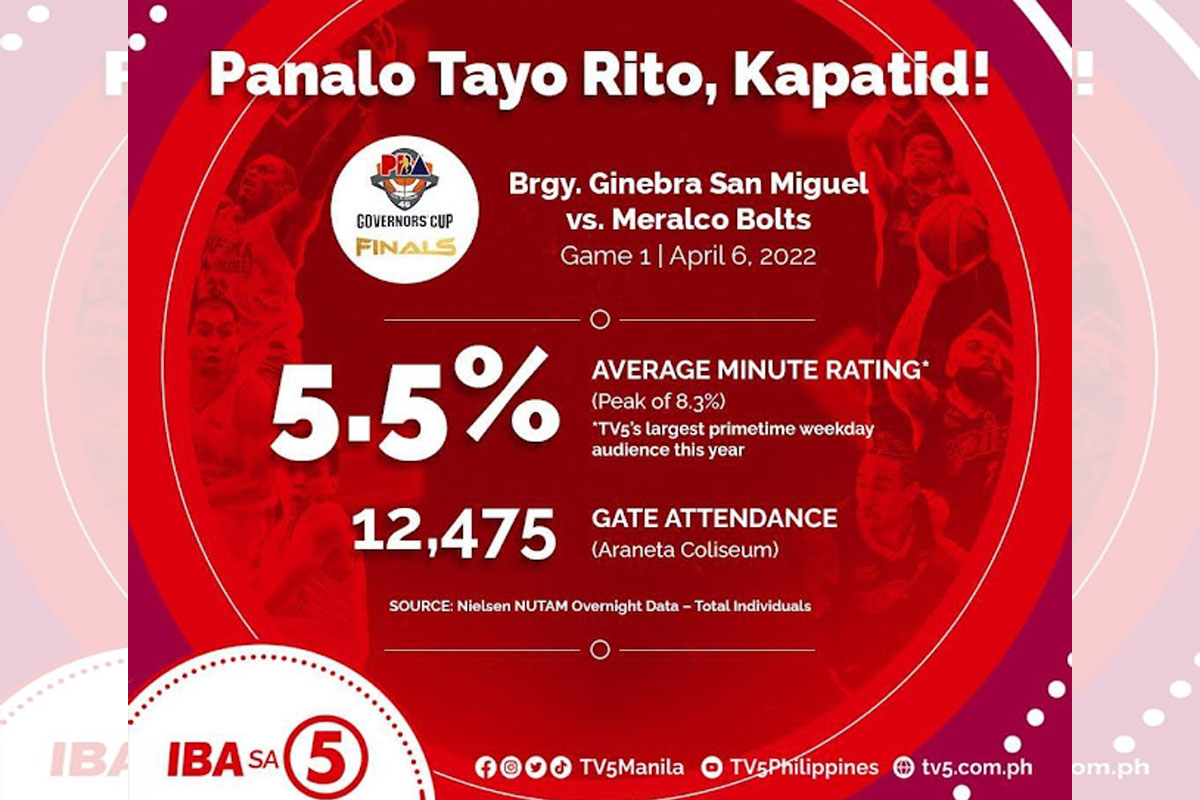 THE PBA fever is raging on this summer as it blazes across the nation once again. The all-time favorite ballgame is making history with record-breaking audience shares on TV5 and in the growing crowd attendance watching the games and all the action LIVE at the Araneta Coliseum.

More viewers are tuning in to TV5 to catch the heated Brgy. Ginebra San Miguel vs. Meralco Bolts best-of-seven clash in this year’s PBA Governor’s Cup Finals. The live airing of Game 1 on April 6 scored an audience share of 5.5% AMR for TV5, reaching over 5.8 million urban audiences throughout the game’s 2-hour and 20-minute run, making it the PBA’s highest highest-rated game this year. TV5’s viewership rating also reached as high as 8.3% AMR at 8:15 PM towards the end of Game 1’s live telecast.

With Araneta Coliseum’s gate attendance reaching 12,475, Wednesday’s game also registered as TV5’s largest weekday primetime (6-10pm) audience in over four years, also boosting viewership for the network’s airing of FPJ’s Ang Probinsyano, which benefited from the high viewership of PBA as the teleserye hit a two-month high rating of 5.4% on TV5. The PBA telecast also scored far higher compared to other programs in its time slot, namely: 24 Oras on GTV Channel and TV Patrol on A2Z.

“TV5’s rating for the past month has been hitting beyond the 2.0% mark, and it is testament not just to the PBA fervor sweeping across the nation but also to the audience appreciation of the quality content the network offers to its viewers. Now, more than ever, we are committed to provide the best sports, news and entertainment content for a rewarding TV viewing experience – because, as we all like to say, ‘Iba sa 5,’” said Cignal and TV5 president and CEO Robert P. Galang.

The PBA Governor’s Cup Finals games are telecast live on TV5 and One Sports (Channel 41 on free TV, Channel 6 on Cignal TV, and Channel 59 on Sky Cable) every Wednesdays and Fridays at 6:00 PM and Sundays at 6:45 PM.