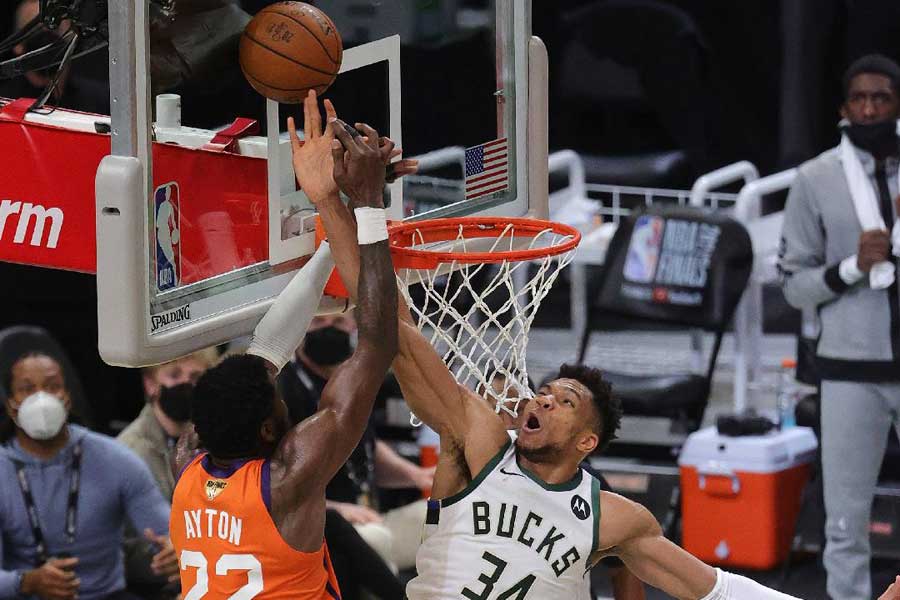 MILWAUKEE (AFP) – Khris Middleton put Milwaukee on his back in the final minutes, scoring 10 of his 40 points down the stretch to rally the Bucks past Phoenix 109-103 on Wednesday to deadlock the NBA Finals.

Greek star Giannis Antetokounmpo added 26 points, 14 rebounds and eight assists for the Bucks, who improved to an NBA-best 9-1 at home in the playoffs.

Milwaukee, which trailed by seven points early in the fourth quarter, closed the game on a 12-4 run in the last 2:07, with Middleton delivering 10 points in the span.

“We just ran sets that enabled me to get to my spots,” Middleton said. “Thankfully I hit some shots.

“That’s what that one was about, finding a way to win a game it seemed like we weren’t going to win to give us life and some momentum.”

Milwaukee equalized at 2-2 in the best-of-seven championship series with game five Saturday in Phoenix and game six Tuesday at Milwaukee.

“The only way we’re going to win this series is to get one on the road,” said Middleton. “It would be nice to get this next one.”

The Bucks, who dropped the first two games in Arizona, seek their first crown since 1971 while the Suns seek the first title in the club’s 53-year history.

Phoenix’s Devin Booker, coming off a playoffs-worst 10-point performance in a game three loss, scored 42 points in a losing cause.

“It’s really tough whenever you can’t win a game, especially at this point in the season.”

The Suns committed 17 turnovers to only five by the Bucks and allowed 17 offensive rebounds for Milwaukee.

“Turnovers just crushed us,” Suns coach Monty Williams said. “They got 19 more possessions. Over the course of the game when you just give it up that many times, the turnovers and offensive rebounding was a bit of a hill for us to climb.”

Phoenix’s Jae Crowder made two free throws to put the Suns ahead but Middleton answered with back-to-back jumpers to put the Bucks up 101-99.

“Tonight called for him to be aggressive with the jump shot,” Milwaukee’s Pat Connaughton said. “At the end of the game, we want him to have the ball. I’m thrilled he was able to show the world because we see it every single day.”

Phoenix’s Chris Paul, in the first finals of his 16-year career at age 36, went 5-of-13 from the floor and made his fourth of five turnovers to set up Middleton’s fast break layup for a 103-99 Bucks edge with 27.2 seconds remaining. Middleton added four late free throws to seal the triumph.

“I got to take care of the ball,” Paul said. “We got 17 turnovers. We shoot the ball too well not to have those opportunities to score.”

Antetokounmpo made a key block late on Deandre Ayton and his defensive work and rebounds helped the Bucks enjoy a 15-0 fast break points edge.

“Giannis, that’s what he has been doing all year. He’s amazing,” said Middleton. “He didn’t have the dominant performance, but he did it with other things.”

Added Antetokounmpo: “We wanted this bad and we got it. We’ve got to keep taking steps forward.”

Only Stephen Curry with 40 points had scored more in the first three quarters of a finals game in the past 25 years than Booker’s 38.

But Booker picked up his fifth foul only 70 seconds into the fourth quarter and appeared to make a sixth, to bring expulsion, in denying Jrue Holiday on a breakaway with just over 3:30 to play. But no foul was called.

“Booker had an awesome night, but everything else was in our favor.”

Kareem Abdul-Jabbar and Oscar Robertson, who sparked Milwaukee’s championship run half a century ago, were among more than 16,000 fans in attendance.

Pagadian in upset win vs Zamboanga in Vis-Min action