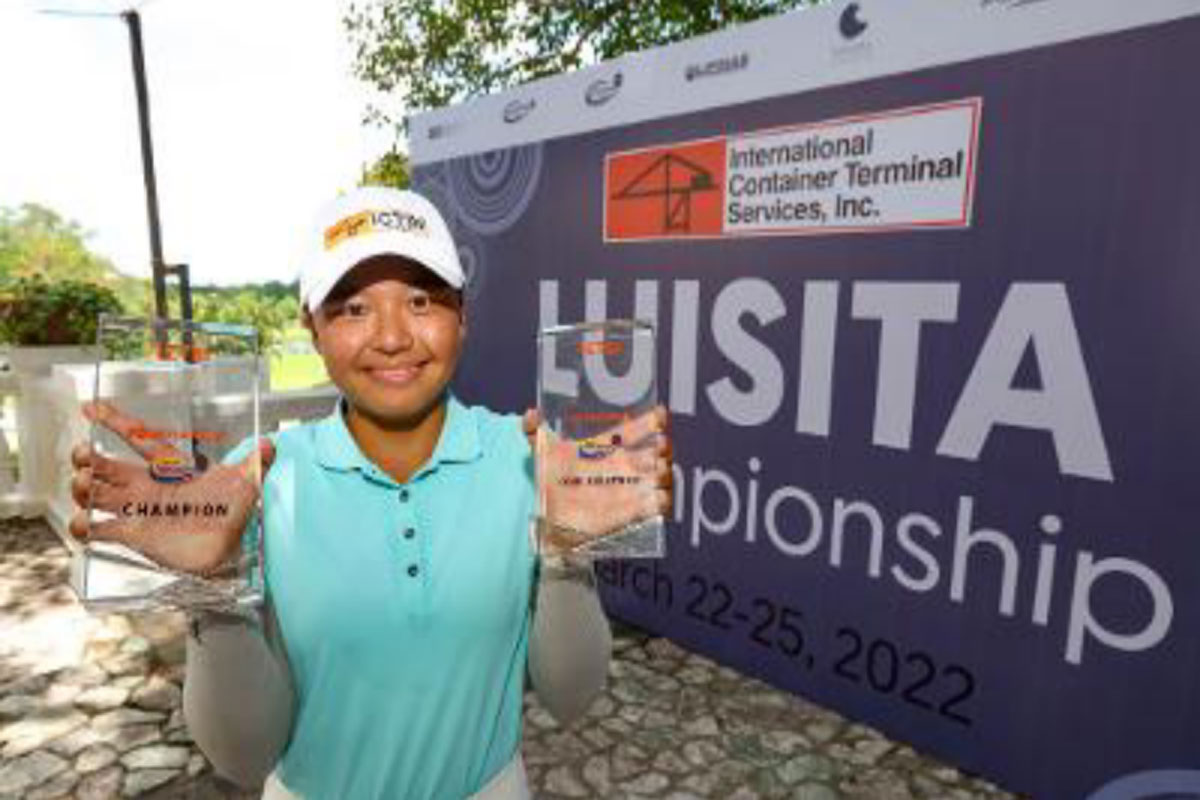 TARLAC – Young Rianne Malixi showed the poise of a seasoned campaigner, coming through with a couple of clutch shots to beat Princess Superal by one in a gripping high noon shootout for the ICTSI Luisita Championship crown here yesterday.

Malixi pulled through in crushing pressure with aplomb, birdying the par-3 No. 17 for the second straight day then watching Superal fumble with a bogey on Luisita’s signature hole for the third straight time to nail her second Ladies Philippine Golf Tour diadem in row after a near-record setting romp at Midlands to close out the 2021 season last December.

The decisive two-shot swing finally thwarted Superal as Malixi finished with a three-under 213 on three 71s in a victory that came three weeks after she dominated her peers in the SEA Games qualifier at the Robert Trent Jones, Sr.-designed layout.

Not even a closing bogey could foil Malixi’s claim on the coveted crown as Superal settled for par on No. 18 for a 70 and a 214 although she took the consolation of pocketing the top purse of P101,250 in the 54-hole tournament kicking off the new LPGT season put up by ICTSI.

Superal, winner of three of the first five LPGT events under the bubble setup last year, came back from two strokes down to force a tie twice, the last on the par-5 16th, which she eagled that drew them level for the last time at three-under overall.

But that hardly rattled the 14-year-old rising star, who bucked the wind with a solid hybrid tee-shot on the water-laced 17th to within six feet and drained the putt, putting the pressure back to her fancied rival, who failed to get up and down and holed out with a bogey.

“The goal was to win but my priority was to learn and experience playing with ate Cess and the other players, which is a rare opportunity,” said Malixi, who also ran away with the amateur honors and, like the rest, stayed hydrated through all three days to fight off the sweltering summer heat.

Having stamped her class in the amateurs and in the pro division, the 2020 national stroke play champion sets off for the US early next month to compete in the AJGA (American Junior Golf Association) circuit where she won one leg in Las Vegas last year.

She’ll be back on April 28 to train with the national team then leave for Hanoi in May to help spearhead the country’s title-retention drive in women’s golf with LK Go.

It was a sorry setback for Superal, who trailed Malixi by two after 36 holes but forced a tie with a two-birdie feat after 12 holes as Malixi traded two birdies with the same number of bogeys in a roller-coaster ride.

But Malixi hit two birdies against one bogey in the next three holes and went 2-up again as Superal bogeyed the 15th. But an eagle-3 on the next by the 2019 LPGT Order of Merit winner set the stage for the pressure-packed ending to what had been a fierce battle for top honors in the P750,000 championship organized by Pilipinas Golf Touraments, Inc.

It was a two-player duel all day as Chanelle Avaricio, the first round leader and the third player in the championship group, reeled farther back with three bogeys at the front and limped with a 75.

Chihiro Ikeda hit a late birdie to match par 72 and finish fourth with 221 and received P60,000 while Pamela Mariano also closed out with an even-par card to post her best finish at joint sixth at 223 with Riviera-Langer leg titlist Daniella Uy, who also shot a 72.

Korean Jane Jeong placed seventh with 229 after a 77 while last year’s Order of Merit winner and two-leg champion Harmie Constantino skied to a 78 and drop to a share of eighth at 230 with Marvi Monsalve and Gretchen Villacencio, who carded identical 75s.

General’s daughters at Sports On Air