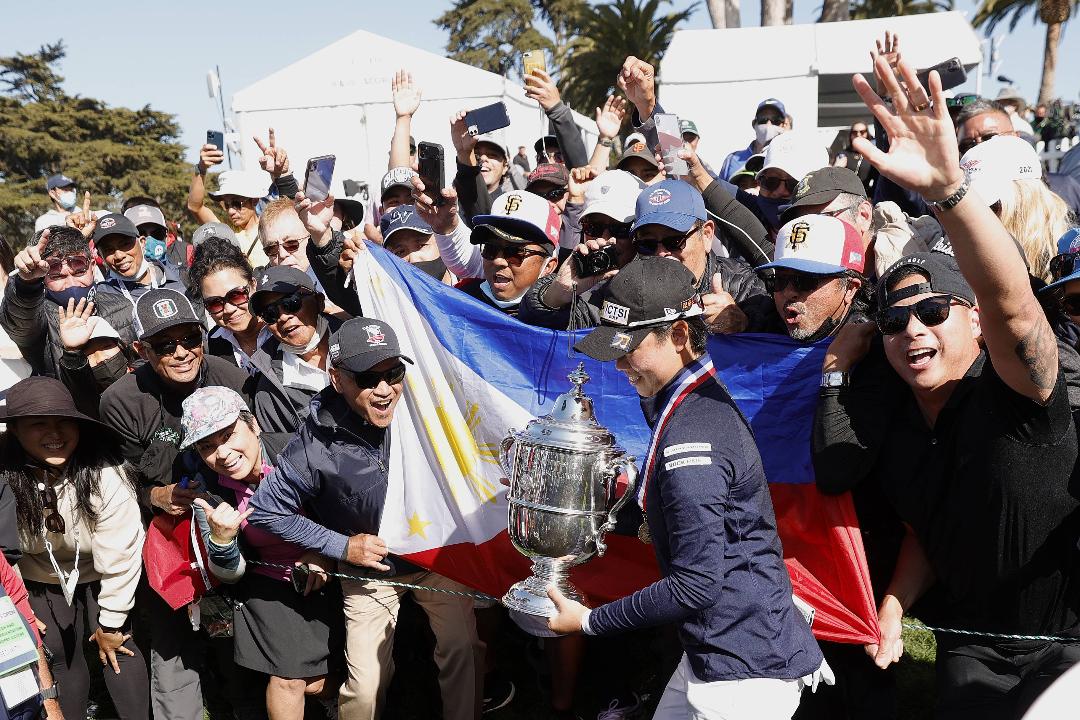 Saso, 19, whose mother hails from Bulacan province, shook off two early double bogeys, coming back with late birdies at 16 and 17 in a two-over 73 to thrust herself into a playoff with a four-under total of 280 for 72 holes.

As overnight leader Lexi Thompson faded, Hataoka carded a final-round 68, but after both she and Saso parred both holes of the two-hole aggregate playoff, it was Saso who came up with a birdie at the sudden-death third hole.

Saso matched South Korean Park In-bee as the youngest winners in the championship’s history at 19 years, 11 months and 17 days, and earned her LPGA tour membership.

“I don’t know what’s happening in the Philippines right now, but I’m just thankful that there’s so many people in the Philippines cheering for me,” said Saso, whose professional resume included two Japan LPGA victories but no wins on the US LPGA tour.

“I don’t know how to thank them. They gave me so much energy. I want to say thank you to everyone.”

Saso had held the 36-hole lead and started the day one shot off Thompson’s lead. But she was in trouble early with double bogeys at the second and third.

“I was actually upset,” said Saso, a two-time Philippine Sportswriters Association Athlete of the Year awardee,.

“My caddie talked to me, said there’s still many holes to go — just keep doing what I was doing the last few days and trust the process.”

Saso was two-under the rest of the way, and had a long birdie putt to win at the 72nd hole. It didn’t drop, but she rattled in the par putt to force the playoff.

Thompson, seeking a second career major to go with her 2014 ANA Inspiration title, was five strokes up on the front nine and remained four up with eight to play.

A double bogey at 11 signalled the start of a slide and her bogey at 14 saw her lead down to two.

Unable to take advantage of the par-five 16th, she missed a five-foot par putt at the par-five 17th to fall into a tie for first.

At the 18th, Thompson was in the fairway but her approach found the front greenside bunker and she left a 10-foot putt to save par, and make the playoff, two feet short.

“That’s what this golf course can do to you,” said Thompson of the imposing par-71 Lake Course at Olympic, which has hosted five men’s US Opens but had never before hosted a women’s major.

She finished with a four-over par 75 that left her alone in third on 281.

“And that’s what I’ve said all week. Overall, I’d be the first one to tell you that I hit some bad golf shots (down the stretch) and I deserved it,” Thompson added, “but it’s golf.”

Hataoka seemed an unlikely title challenger as the day began. She was six shots off the lead and came within a whisker of completing the greatest final-round rally in US Women’s Open history.

She started with a birdie at the first, and rebounded from a double bogey at the sixth with birdies at the seventh and ninth.

Two pars to finish made her the first in the clubhouse on 280, and it wasn’t long until she was joined there by Saso.

It was Hataoka’s fourth LPGA tour playoff and her second in a major, but in each one she has come up empty.

“On the first (major championship) playoff I had to wait over an hour, so I was kind of excited,” Hataoka said of her near-miss at the 2018 Women’s PGA Championship. “It got me all excited and uptight.

“But this one since it was right away, I decided I would just be relaxed, then just keep doing what I’m supposed to be doing, and this was the result.”