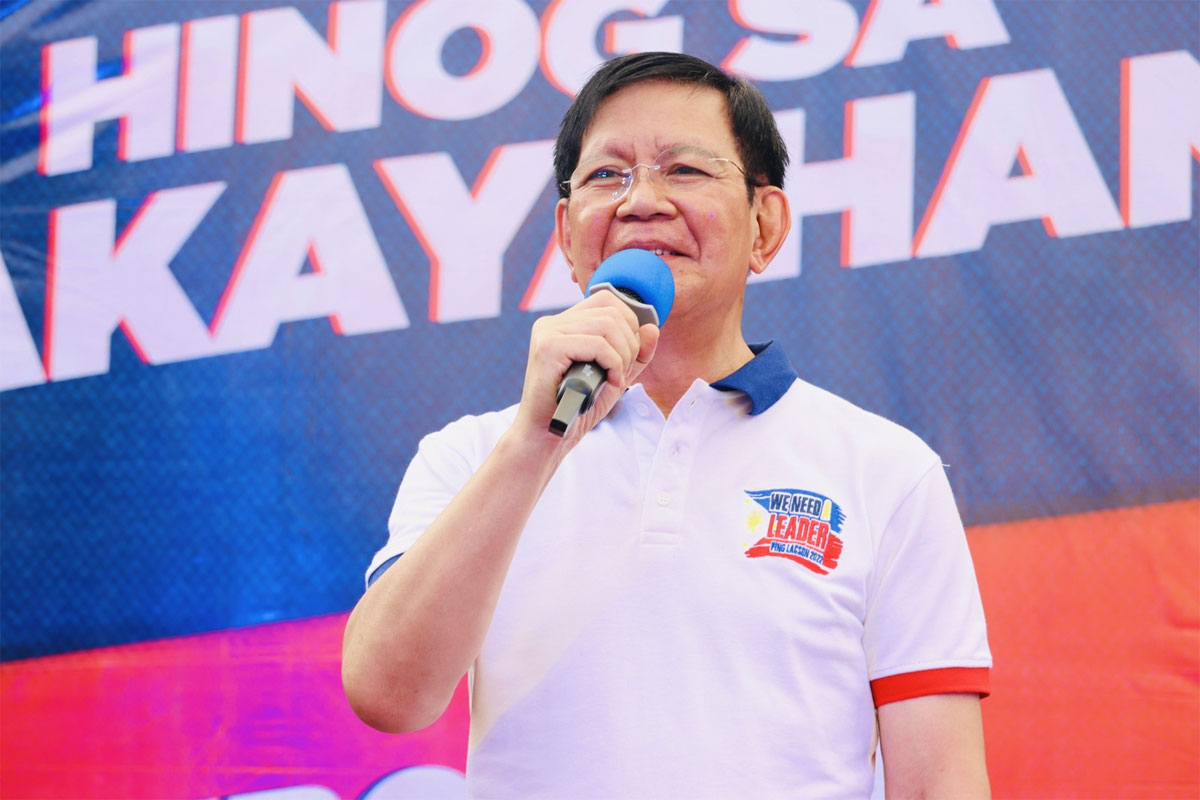 PRESIDENTIAL candidate Panfilo “Ping” Lacson joined four of his fellow aspirants on Easter Sunday to reject any and all kinds of attempts from other political camps to “strip them down” of their support groups just to force them to withdraw their candidacies in the May 9 elections.

For the nth time, Lacson said he was not withdrawing from the race adding he was tired of explaining and replying to such issues.

“Tuloy ang laban hanggang May 9,” he said during a joint press conference at the Peninsula Manila Hotel in Makati yesterday.

Lacson and Manila Mayor Francisco “Isko” Moreno Domagoso have been very vocal about sharing their common experiences in being pressured to back out from the presidential race, which was also the same thing that happened to three other candidates.

The veteran senator said former Defense Secretary and National Security adviser Norberto Gonzales personally reached out to him for a plan to initiate a joint press conference with the other aspirants involved, so they could settle these talks once and for all and enlighten the public about the deceptive moves of their leading opponents.

He bared his own experience was similar to mayor Moreno where “they wanted to strip us down.”

Lacson did not mention the other candidate but was obviously referring to the camp of vice president Leni Robredo as he mentioned what happened to him and his former political party.

Lacson had resigned as chairman of Partido Reporma after party president Bebot Alvarez endorsed Robredo as its presidential bet.

The former top cop later bared that the sudden shift in support could have been caused following his refusal to give in to the request of Alvarez’ chief of staff who approached him and asked P800 million as additional party fund.

In yesterday’s joint press briefing, Lacson, Moreno and Gonzales stood united in calling for more open and honest elections that do not limit the choices of the electorate down to two leading presidential candidates based on mainstream surveys, which they believe are poised to condition the minds of the public.

Both Lacson and Moreno clarified that their decision to take their issues against the camps of the two leading presidential candidates, particularly that of Vice President Maria Leonor ‘Leni’

Robredo, in public was not to attack her but only to educate the people that these things have been going on.

However, during the press briefing, Moreno took a swipe at Robredo’s camp for the attempts to have them withdraw from the presidential race.

Instead, Moreno return the message to Robredo by urging her to do “a supreme sacrifice” saying she should be the one to withdraw from the race.

“Marami talagang attempts and parang nili-limit na lang ‘yung choice or choices sa dalawa, nakakahon na lang, and that’s the reason why we have to do this. That among 111-[million] or so

They were being forced to withdraw to the extent of making deliberate attempts at spreading mis- and disinformation through both traditional and social media just so the vice president could square up against former Senator Ferdinand ‘Bongbong’ Marcos, Jr. anew.

“That’s why we are here. Because we’re offering ourselves, we’re offering options or choices to the Filipino electorate. And to unite under one candidate would be falling into the trap of that particular candidate… They’ve been working on it for the longest time, since the start,” Lacson said.

Pacquiao and Abella were supposed to also make personal appearances at the press conference held at the Peninsula Manila Hotel in Makati City. The two, however, ultimately were not able to attend but confirmed they were supportive of the joint statement issued by their fellow candidates.

Lacson and Sotto reiterated their commitment to finish the race as a tandem no matter what happens.