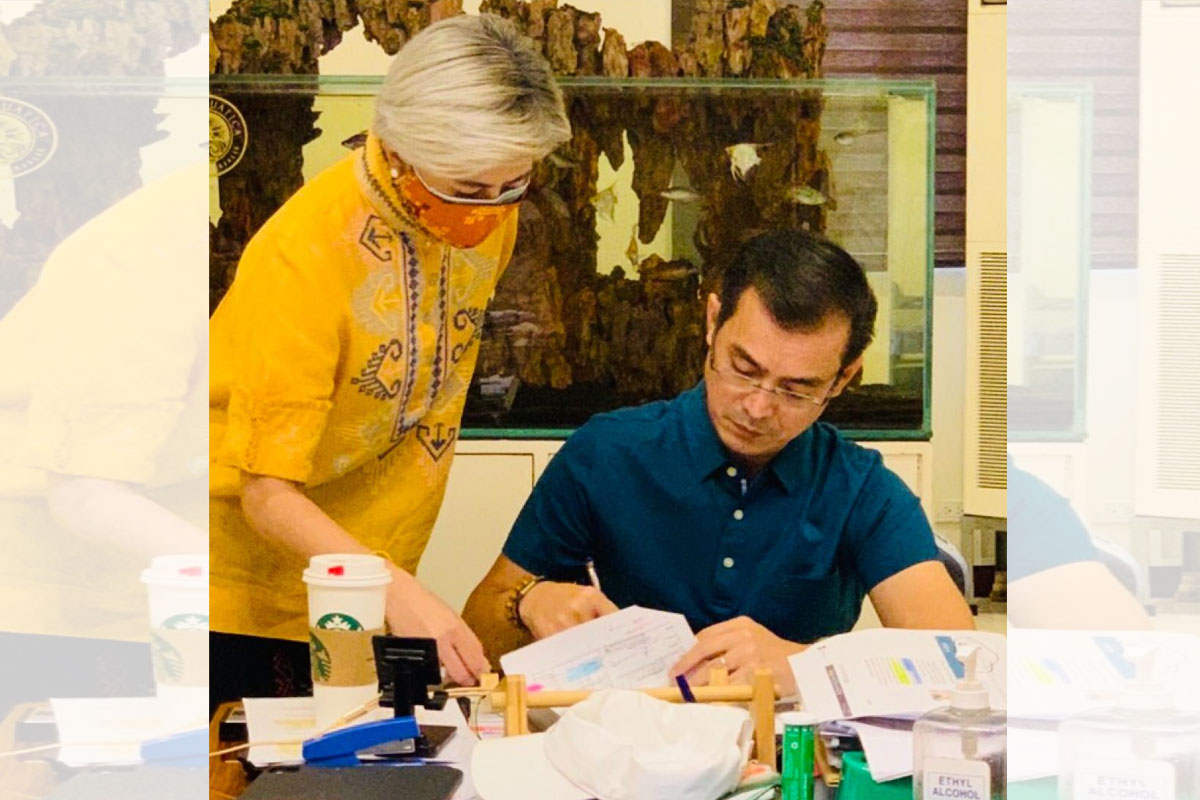 Mayor Isko Moreno signs the documents for the purchase of 400,000 doses of Sinovac for Manila. Beside him is Vice Mayor Honey Lacuna. Photo by JERRY S. TAN
Metro,

EVEN while consistently leading all other cities in the National Capital Region in terms of fast and efficient deployment of vaccines, the city of Manila will be ramping up its mass vaccination even more, as Mayor Isko Moreno announced that he successfully procured 400,000 doses of Sinovac directly from its manufacturer.

The vaccines, he said, will arrive in a few days and is on top of the 800,000 Astra Zeneca doses that the city procured last year and which will arrive in September.

As this developed, Manila made it to the top 50 Champion Cities chosen by the Bloomberg Philanthropics as finalists out of 613 cities all over the world that applied for inclusion in the 2021 Global Mayors Challenge, an innovation competition that will identify and accelerate the most ambitious ideas developed by cities in response to the COVID-19 pandemic. In his live broadcast, Moreno thanked and congratulated the residents of Manila as well as his fellow officials and employes in the local government for the recognition. Fifteen of the 50 finalists chosen because they represent the world’s leading urban innovations to emerge from the pandemic will be receiving $1 million each as well as multi-year support to implement and spread their breakthrough ideas.

It was learned that in the Philippines, only Manila and Butuan City made it to the list and they are also among the only six that were included from the Asia-Pacific region.

Meanwhile, Moreno said the city government already paid in full the amount of over P298.5 million worth of additional 400,000 doses of Sinovac to the maker, Sinovac Life Sciences Co., Ltd., in an effort to expeditiously have more Manilans vaccinated.

Moreno thanked Vice Mayor Honey Lacuna and members of the Manila City Council which she presides, for helping him find the necessary funding for the said vaccines’ procurement. He also thanked the national government for making it possible for him to enter the contract of acquisition as well as Ambassador of China to the Philippines Huang Xilian and the Beijing government for the assistance.

Yesterday (June 16), the city began inoculating those belonging to the A5 category or those from the indigent population. A total of 7,700 doses were allotted for eight vaccination sites in Districts 1, 5 and 6.

First dose vaccination was also carried out for A2 and A4 categories (senior citizens and economic workers) in four malls. In each, 2,500 doses were allotted or 10,000 in total.

Meanwhile, about 5,000 second doses were also given in six schools for A1, A2 and A3 categories or health frontliners, senior citizens and persons with comorbidities aged 18 to 59. In all sites, vaccination was done from 6 a.m. to 8 p.m.