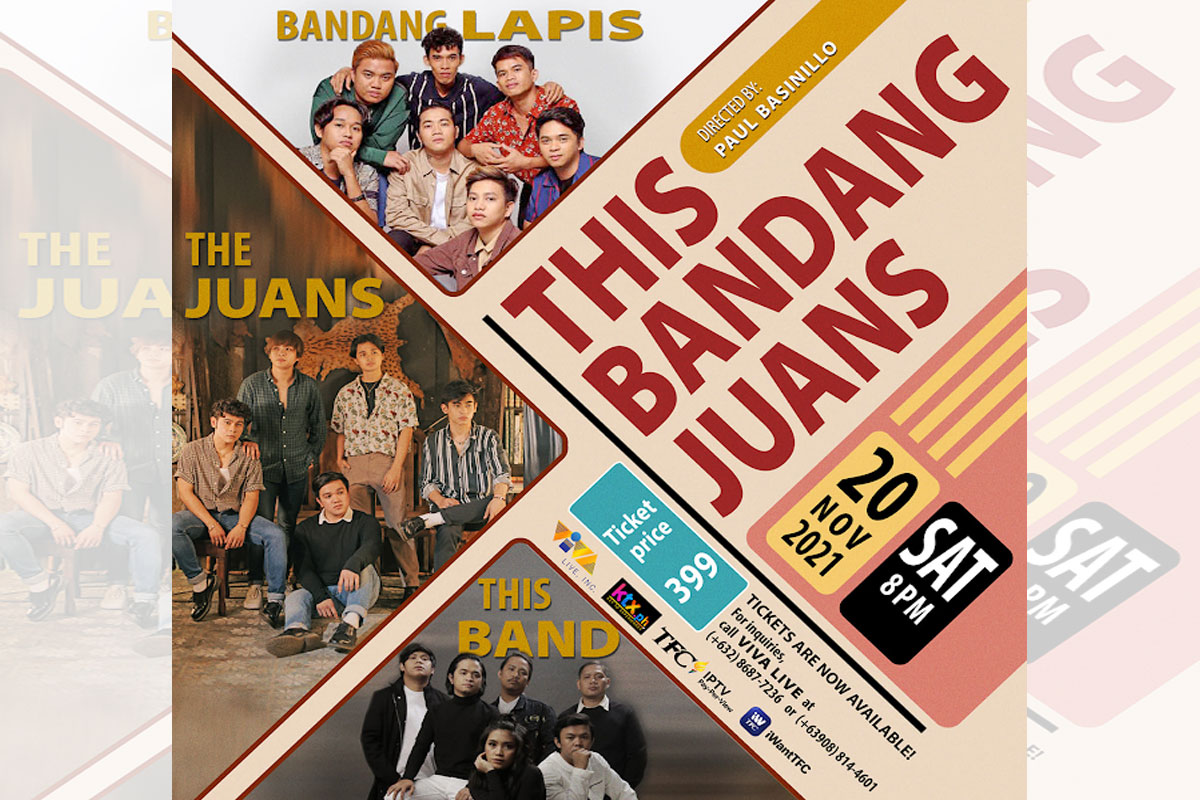 This streaming concert brings together three of the biggest bands in the Pinoy pop music scene today: This Band, Bandang Lapis and The Juans.

Local music fans would know who these bands are, as the aforementioned groups are legitimate movers and shakers in the local band scene today.

Starting with This Band, who is the group behind the monster hit Kahit Ayaw Mo Na. The song has the distinction of being the biggest song of 2018 and to date, has over 106.8 million streams on Spotify and more than 50 million accumulated views on YouTube.

This Band has since scored a string of big hits with songs such as Hindi Na Nga (with over 76 million streams on Spotify alone), ’Di Na Babalik (43.3 million) and Nang Iwan (16.5 million) among other hits that make them one of the most listened-to groups of the last three years.

Meanwhile, Bandang Lapis is a surprise group that lorded it over YouTube and streaming platforms in 2020 when their elegiac song Kabilang Buhay became the de facto anthem and hit during the first few months of the pandemic.

Bandang Lapis, the biggest breakout band of 2020, had their nationwide success for their elegiac song Kabilang Buhay.

Then there’s The Juans, who over the past half-decade has been steadily growing in stature in the music scene.

Starting with early fan-fave hits such as Atin Ang Mundo and Magkasama to Nasayang Lang, and Prom, to current day hits such as Hindi Tayo Pwede, Istorya and Pangalawang Bitaw, The Juans – singers Carl Guevarra, Japs Mendoza, rhythm guitarist RJ Cruz, bassist Chael Adriano and drummer Joshua Coronel have amassed a considerable catalog that many of their fans and casual listeners can relate to.

The Juans have established themselves as a formidable music group at par with the biggest bands the local music scene has produced.

As Carl Guevarra once said, “We’re nothing without the songs and those who listen to us. So that’s what we’re going to keep giving them.”

The Juans just keep getting better at dishing hits as their recent singles Dulo and Anghel continue to match and shatter the group’s previous accomplishments.

The Juans have almost 140 million streams on Spotify alone on about 10 of their most popular singles to date and are still growing.

These three music groups are at the core of what This Bandang Juans will be come November 20 when it streams on KTX.ph, iWantTFC and TFC IPTV.

Expect to hear The Juans, This Band and Bandang Lapis to perform their biggest hits and more. Big hits and unique collaborations between these hit bands will surely make this streaming special a unique music spectacle that only Viva Live, Inc. can deliver.