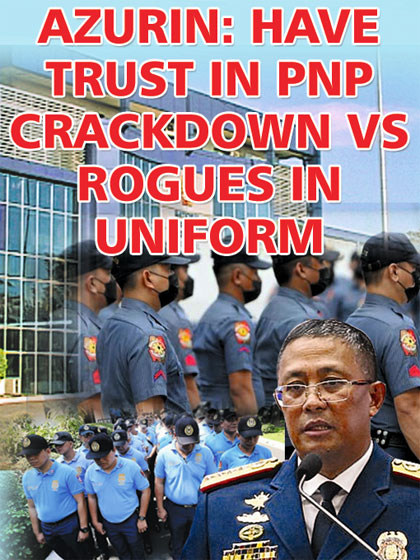 The top cop maintained that the series of arrest of rogue active and dismissed police personnel is a solid testament to their sincere internal cleansing program which should be trusted by all Filipinos.

According to the PNP chief, the public is assured that all their complaints against misfits and scalawags in the force are being completely addressed by the PNP leadership particularly by the PNP –IMEG which does not tolerate abusive acts and other irregularities being committed by its men.

Gen. Azurin maintained that as a professional organization, they maintain a ‘zero-tolerance’ policy on misfits and scalawags in the police force and is seeing to it that any breach of discipline and irregularities being committed by its wayward personnel are being handled properly thru the conduct of criminal and administrative proceedings.

However, he said they still need the full cooperation of the public in unmasking rogues in the police force. “We really need the cooperation of all sectors in the community. Sabi ko nga ay pagtulong-tulungan natin na sugpuin ang krimen sa ating barangay. At the end of the day, pulis ang magle-lead at magpapatupad ng batas para sa kaayusan at katahimikan ng ating lugar,” he said.

Brig. Gen. de Leon said that any information may be relayed to the PNP IMEG Hotlines: Smart- 09989702286 or Globe- 09957952569 or thru the Facebook Page: Integrity Monitoring Enforcement Group and Twitter Account: @imeg2017. He assured that the identities of the informants will be kept in utmost secrecy to protect them from possible reprisals from any suspect.

The PNP-IMEG made the arrests following tips provided by concerned citizens.

The PNP-IMEG director said that the accused was arrested following days of surveillance triggered by a complaint that thru coercion and intimidation, he was demanding a weekly P2,000 ‘payola’ from a former ‘lotteng’ operator in the municipality.

However, the complainant from Barangay Poblacion 6 in Balayan claimed that he had already stopped his illegal gambling activities after being diagnosed with Stage 3 colon cancer in March 2021.

“Despite this, the suspect insisted that the complainant must give him P2,000 a week supposedly as protection money,” said Brig. Gen. de Leon.

Acting on the complaint, from the cancer patient identified only as ‘RM,’ members of the IMEG Luzon Field Unit, with the support of officers from the PNP Special Action Force’s 35th Special Action Company, the Batangas Police Provincial Office and the Balayan MPS arrested the suspect during an entrapment operation in front of the Robinson’s Bank near their station.

Recovered from the possession of the accused were the boodle money topped by a marked P1,000 bill, his PNP-issued caliber 9mm Pietro Beretta semi-automatic pistol with a magazine containing 14 live ammunition and a wallet containing several identification cards and P3,450 in different denominations.

Gen. Azurin Jr. has assured all Filipinos that complaints against rogues in uniform are being completely addressed by the PNP leadership which does not tolerate abusive acts and other irregularities being committed by its men.

According to the top cop, the PNP as a professional organization maintains a ‘zero-tolerance’ policy on misfits and scalawags in the police force and is seeing to it that any breach of discipline and irregularities being committed by its wayward personnel are being handled properly thru the conduct of criminal and administrative proceedings.

However, he said they still need the full cooperation of the public in unmasking rogues in the police force.

From 2016 to last June alone, the PNP dismissed 3,632 rogues in uniform and suspended 3,147 others for various criminal and administrative offenses. Another 9,408 erring police personnel were also reprimanded or demoted during the period,” Gen. Azurin said.

“We always strive to provide the most credible service to the general public. Their confidence is the bastion of our duty to fight against injustices and eradicate criminality. Thus, for this to happen, we have to ensure that we possess the value of trustworthy law enforcers,” the PNP chief said.

According to the highest police official of the land, the PNP will always recognize the contribution of honest and dedicated police officers but will not hesitate to condemn those who tarnish the good reputation of the organization.

The country’s 28th top cop said that under him, he wants to confront ‘those within the organization who err.’

According to him, their internal cleansing program of preventive punitive and restorative efforts have been actually very effective but still, all police commanders need to exercise their respective disciplinary authority or be replaced with a more competent commander.

“It will be a year of continuing change for the organization as we remain resolute in improving police work and capabilities and cleansing our ranks of misfits and scalawags,” the member of Philippine Military Academy ‘Makatao’ Class of 1989 declared.

Gen. Azurin has designated Brig. Gen. de Leon of PNPA Class 1993 to head the PNP -IMEG which is tasked to go after rogues in police uniform ‘without fear or favor.’

The official said they are going after active, retired and dismissed police personnel regardless of their rank, position and source of commission.

Shortly after he assumed his new pos last August 8t, de Leon announced the arrest of Police Master Sergeant Alvin Enad, an active member of the Police Regional Office 7 who is wanted for a robbery with double homicide case.

Court records showed that the suspect was charged in connection with the death of couple Peter and Malou Baringui-an in San Fernando, Cebu on February 13, 2022. The slain woman is a councilor of Barangay Balungag when he and her husband were shot dead while they were about to have their dinner with their family and bodyguards inside their house in Bgy. Panadtaran.

At least five bonnet-wearing men armed with long firearms barged inside the victims’ residence and shot them without any provocation. Malou was aiming for a seat in San Fernando’s town council in last May 9 election when she was killed.

Five policemen were later linked to the killing of the couple and charged with robbery with double homicide, said PRO7 director, Brig. Gen. Roque Edgardo DP Vega. Four suspects were eventually accounted for by the PRO7 days after the killing.

During investigation, one of the accused policemen tagged Enad as one of their accomplices prompting Vega to place him under camp restriction pending the issuance of a warrant of arrest against him.

Brig. Gen. de Leon said that the other active and former policemen they have arrested were wanted for robbery with violence against or intimidation of persons, murder and women and child abuse.

He said that some of the accused was dismissed from the police force for their nvolvement in extortion cases.