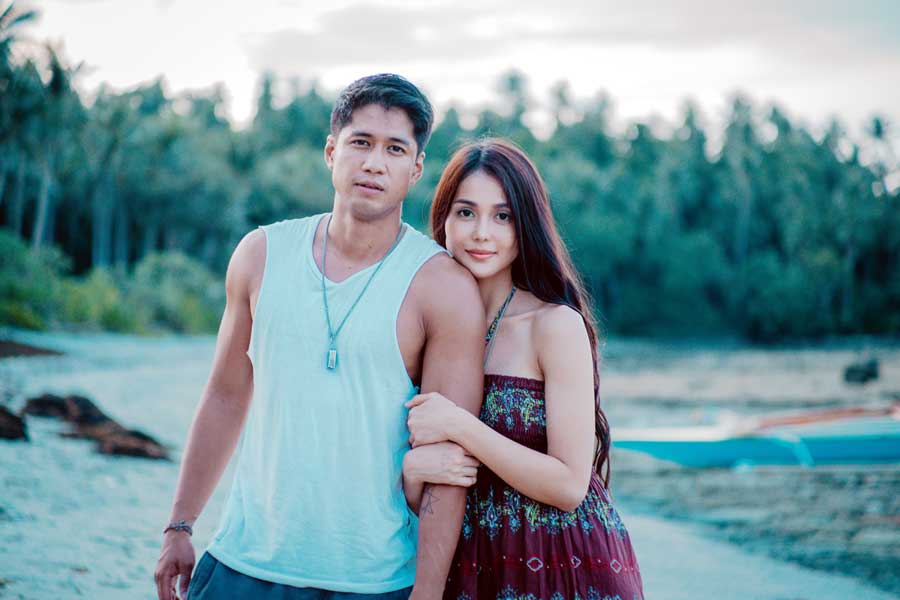 ALJUR Abrenica is now managed by LVD Entertainment of Leo Dominguez who hosted a solo zoom presscon just for him. It’s very brave of Leo to handle him because we all know Aljur cannot go back to GMA-7 after he suddenly resigned from them and also with ABS-CBN who he antagonized because of his remarks when its franchise was not renewed.

It’s good Viva signed him up for three movies, so at least, he has work. His first movie with Viva is the sexy drama, “Nerisa”, where he does daring love scenes for the first time. Former beauty queen Cindy Miranda plays the title role of “Nerisa”, under the direction of Law Fajardo. There are many underwater scenes as they shot on location in Alabat Island in Quezon. Leo hosted a solo presscon for him to support the promotion of “Nerisa” that starts streaming soon.

“We had to take diving lessons before shooting started,” says Aljur. “The love scenes are daring but it’s not just all baring as we were also required to do heavy dramatic scenes. Bilib ako kay Cindy, she’s a newcomer pero magaling siya. Wala rin siyang limitations sa sexy scenes.”

So how did they prepare for their nude scenes? “Nag-usap muna kami. I asked her how far would she be willing to go? Naging open kami sa isa’t isa. I was worried about her kasi marami siyang ginawang daring scenes. Pareho kaming bigay na bigay. Ginawa namin ang required sa amin as actors. Pero ako siempre, I tried to protect her also bilang respeto sa kanya at sa pagkababae niya.”

It’s said they really got close while shooting in Alabat Island so it’s not surprising that Cindy was accused to be the third party in the break up of his marriage to Kylie Padilla. What can he say about this?

That’s because he doesn’t want to talk about the real reasons of their marital breakup. Some writers make all sorts of speculations.

Those who have seen the first cut of “Nerisa” are praising his acting. They say he has improved a lot after his critics then lambasted him for his wooden style of acting in “Machete”.

‘Nerisa’ is written by the much respected screenwriter Ricky Lee. You can start watching it on July 30 on kktx.ph, iWantTFC, and TFC IPTV for only P249 and also on Vivamax.Inline image

Direk Ricky to do an international project

RICKY Davao was last seen in an acting role in TV5’s “Paano ang Pangako”, which he also co-directed. Now, he’s back with GMA-7 directing the new Afternoon Prime drama series, “Nagbabagang Luha”, based on the hit 1988 film of National Artist Ishmael Bernal.

It stars Glaiza de Castro in the role originally played by Lorna Tolentino, Rayver Cruz (Gabby Concepcion before), Mike Tan (Richard Gomez before) and newcomer Claire Castro (Alice Dixson before). How did he adapt the film for TV?

“Siempre, we have to expand the material kasi the film is just two hours long, while the series will run for one season of 13 to 15 weeks,” he says. “We gave the characters of Glaiza as Maita and Claire as Cielo back stories nung bata pa sila. Their parents are Jaclyn Jose and Allan Paule. Jaclyn left their family and Glaiza became the very caring Ate of Claire, na naging sobrang pasaway naman noong lumaki. But the core of the story remains the same and nandun pa rin yung iconic scenes, like Cielo saying ‘Mamamatay ako’ and Maita answering ‘Ipalilibing kita’.”

They also added some characters. “We now have Myrrtle Sarrosa as a girl who runs after Rayver and Royce Cabrera as a drug lord who becomes the lover of Claire. And yes, we have actress-director Gina Alajar as the aristocratic mother of Rayver na hindi makasundo ni Glaiza.”

Claire Castro is the daughter of former teen stars Diego Castro and Raven Villanueva while Royce Cabrera is his co-star in “Fuccbois” for which he won a best supporting actor award. Did he personally get them for the show?

“For the role of Claire, GMA had an audition. Maraming nag-audition at si Claire ang napili nila. She surprised us as she’s good, hindi nagpalamon kina Glaiza at Rayver who are more experienced actors than her. Si Royce naman, when GMA got me to direct the show, kasama na siya sa casting. Nagulat nga ako when I saw him. But GMA made the right choice when they signed him up kasi magaling naman talaga siyang artista. Malalim siya. Sabi nga ng co-stars niya, he’s a thinking actor.”

What can Royce say about this praise from Direk Ricky? “I’m speechless po,” he says. “Sobrang nakakatuwa coming from him. I’m very thankful for the opportunity na ibinigay sa akin ng GMA and I’m so happy that other people like Direk Ricky appreciate my work. I’m so honored.”

“Nagbabagang Luha” will start airing on GMA Afternoon Prime starting August 2. Direk Ricky says they have had two lock in tapings for the series. The first one took 40 days and the second one was nearly a month long.

After this, he has an offer to do a film abroad with foreign actors. “I’m excited. It will also be filmed abroad and their market is also abroad. But no details yet. They’re now writing the first draft of the script then we will have a pre-production meeting. Sana, matuloy.”

He now has a daughter who has also joined showbiz, their youngest, Arabella. But how come she signed up as Kapamilya? “Nagulat din ako. Bata pa yan, marami nang kumukuha, gustong i-manage siya. But just like her cousin, Janine Gutierrez, tinapos muna niya ang college course niya sa Ateneo before she joined showbiz. I will just be here to support her.”