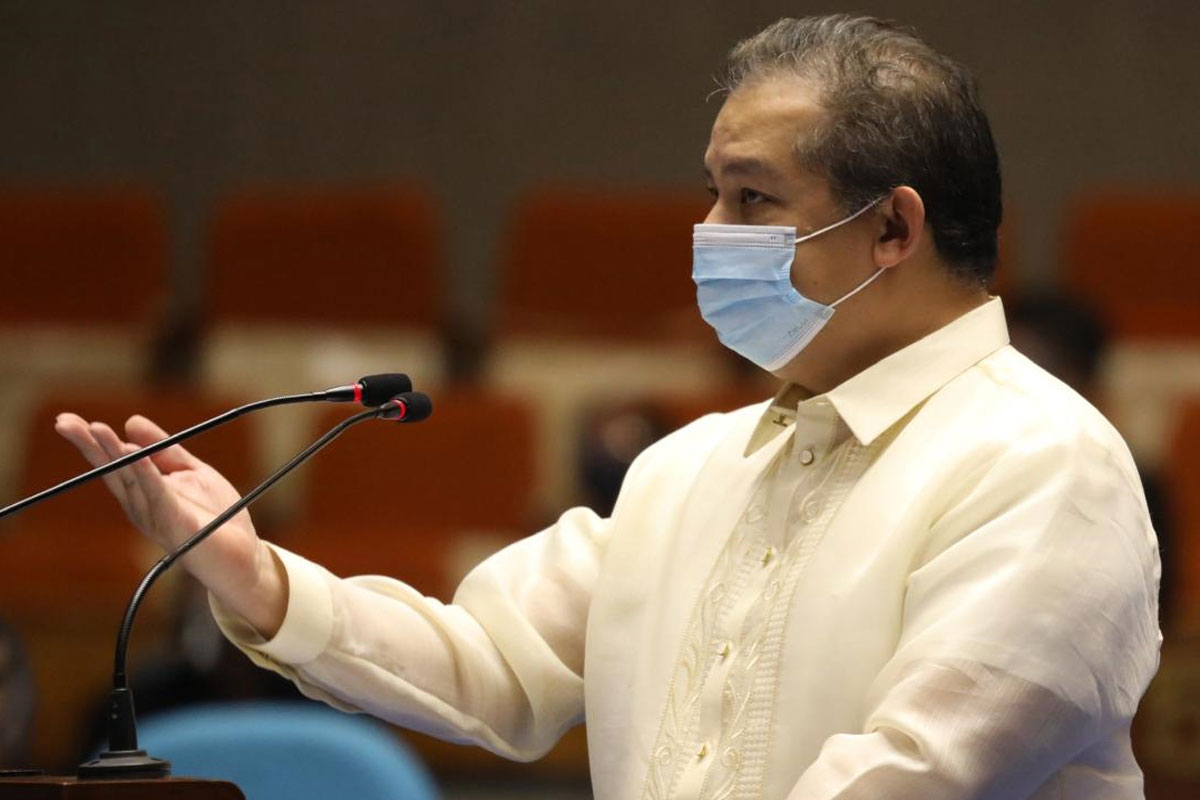 House Majority Leader and Leyte Rep. Martin Romualdez delivers his speech during the sine die adjournment at the plenary of the House of Representatives. Romualdez said House Speaker Lord Alan Velasco approved his motion to allow all standing and special committees to hold hearings during the congressional recess this month until the resumption in July 26 for the opening of the Third Regular Session and the final State of the Nation Address (SONA) of President Rodrigo Duterte. Photo by VER NOVENO
Nation,

Velasco hailed for management with compassion

Acting on the request of his colleagues during the House Committee on Rules’ regular meeting last Tuesday and upon approval of Velasco, the plenary also adopted Romualdez’s motion to allow all standing and special committees to hold hearings during the congressional recess this month until resumption in July.

Romualdez, chairman of the House committee on rules, said this will permit lawmakers to continue performing their mandate of conducting public hearings or inquiries in aid of legislation.

“The sine die adjournment will not stop the House from working under the Velasco-led leadership,” Romualdez stressed.

He said allowing House panels to hold meetings aims to produce noteworthy and meaningful proposed legislations even on recess.

“We will not be distracted and we will not lose track on shepherding priority legislations that will answer and cater to the needs of the welfare of the people especially in this challenging and difficult time. We must work doubly hard to craft and put into fruition the passage of the priority measures, including bills relative to the fight against the pandemic,” said Romualdez.

In his sponsorship speech of House Resolution (HR) No. 1838, Romualdez emphasized Velasco’s “exemplary display of management with compassion” as he strongly ensures the health and safety of House members and employees from the threat of coronavirus disease-19 (COVID-19) by implementing a quarterly real-time reverse transcription-polymerase chain reaction (RT-PCR) tests and bi-weekly antigen (AG) tests for all members and employees of the chamber, taken at the beginning of their work shift, including official guests who enter the house premises.

“Speaker Velasco has proven himself an exemplary leader, and vigorously demonstrated unwavering leadership, resiliency, innovativeness, and perseverance. In consideration of these sterling qualities, I, therefore, call upon my esteemed colleagues to support the adoption of this resolution to show Speaker Lord Allan Jay Q. Velasco our great appreciation, recognition, and deep gratitude for his steady, focused, and consultative kind of leadership that constantly pulled us together during this unprecedented time,” Romualdez said of the resolution co-authored by House Minority Leader and ABANG LINGKOD party-list Rep. Joseph Stephen Paduano.

Romualdez noted that upon Velasco’s assumption as Speaker in October 2020, the 42-year-old’s “style of youthful, focused, consultative and inclusive leadership” unified the chamber and immediately acted on the approval of House Bill (HB) No. 7727, which was later signed into law as Republic Act (RA) No. 11518, otherwise known as the “General Appropriations Act Volume 1-A Fiscal Year 2021.”

“Since the end of the first quarter last year, Congress faced head-on the challenges brought about by the onslaught of COVID-19. With great dispatch, we delivered crucial and urgent legislative measures to address the needs of the Filipino people,” Romualdez, a lawyer from the University of the Philippines (UP) and president of the Philippine Constitution Association (Philconsa), said.

“Under the competent stewardship of Speaker Velasco, the House of Representatives has remained steadfast and resolute on the enactment of laws to uplift the plight of many of our suffering ‘kababayans’ from the devastation brought about by this national health emergency,” added Romualdez, president of the Lakas-Christian Muslim Democrats (CMD).

Among the other notable measures prioritized by Speaker Velasco were RA 11519 or the “Bayanihan To Recover As One Act,” and RA 11520 which extended the availability of the 2020 national budget until Dec. 31, 2021.

Under the decisive leadership of Speaker Velasco, congressmen also worked hard for the successful passage of equally important laws such as RA 11525 or the COVID-19 “Vaccination Program Act of 2021”; RA 11523, also known as the “Financial Institution Strategic Transfer (Fist) Act”; RA 11534, also known as the “Corporate Recovery And Tax Incentives For Enterprises Act”; RA 11509, or the “Doktor Para Sa Bayan Act”; RA 11510, or the “Alternative Learning System Act”; RA 11524, or the “Coconut Farmers And Industry Trust Fund Act”; RA 11521, or “An Act Further Strengthening The Anti- Money Laundering Act Of 2001”; and RA 11517 which authorizes the President to expedite the processing and issuance of national and local permits, licenses and certifications in times of national emergency.

During the Second Regular Session of the 18th Congress, Speaker Velasco spearheaded the approval on third and final reading of the remaining priority bills certified as urgent by President Rodrigo Roa Duterte which include HB No. 8999 or the “Medical Reserve Corps Act,” which makes it necessary to maintain a strong, proactive, and responsive healthcare system at all times especially during a public health crisis; and bills seeking to further amend Commonwealth Act No. 146 or the “Public Service Act,” as amended; RA 7042 or the “Foreign Investments Act Of 1991,” as amended; and RA 8762 or the “Retail Trade Liberalization Act Of 2000,” which lowers the required paid-up capital for foreign retail enterprises to allow more foreign investments and hasten the country’s economic recovery from the stagnating effects of COVID-19.

“Pursuant to its solemn commitment to find meaningful solutions to the challenges brought about by COVID-19, the House of Representatives approved on third reading House Bill No. 8628, also known as the Bayanihan To Arise As One Act which aims to continue giving cash-aid to every Filipino, regardless of social status, and likewise adopted on third reading the Resolution Of Both Houses No. 2, which seeks to amend the restrictive economic provisions of the 1987 Constitution in order to fully transform the economic growth into inclusive and solidary progress among Filipinos,” he said.

Velasco also pushed to recognize the important role of women in society, especially the front liners, health care workers, and members of essential industries, who risk their health and lives to serve the country during this pandemic, Romualdez said.

“Speaker Velasco convinced and rallied his colleagues in the House of Representatives to pass more laws that would further promote women’s rights and gender equality. He also fully supported the launch of a handbook entitled How To Be a Gender-Responsive Legislator which gives lawmakers a unique opportunity to carefully craft their bills and resolutions through a more gender-responsive lens, amplifying the voice of women and other genders within the halls of Congress,” he continued.

The House closed the Second Regular Session of the 18th Congress on Wednesday evening, and is scheduled to return to the Batasang Pambansa on July 26 for the opening of the Third Regular Session and the final State of the Nation Address (SONA) of President Rodrigo “Rody” Duterte.