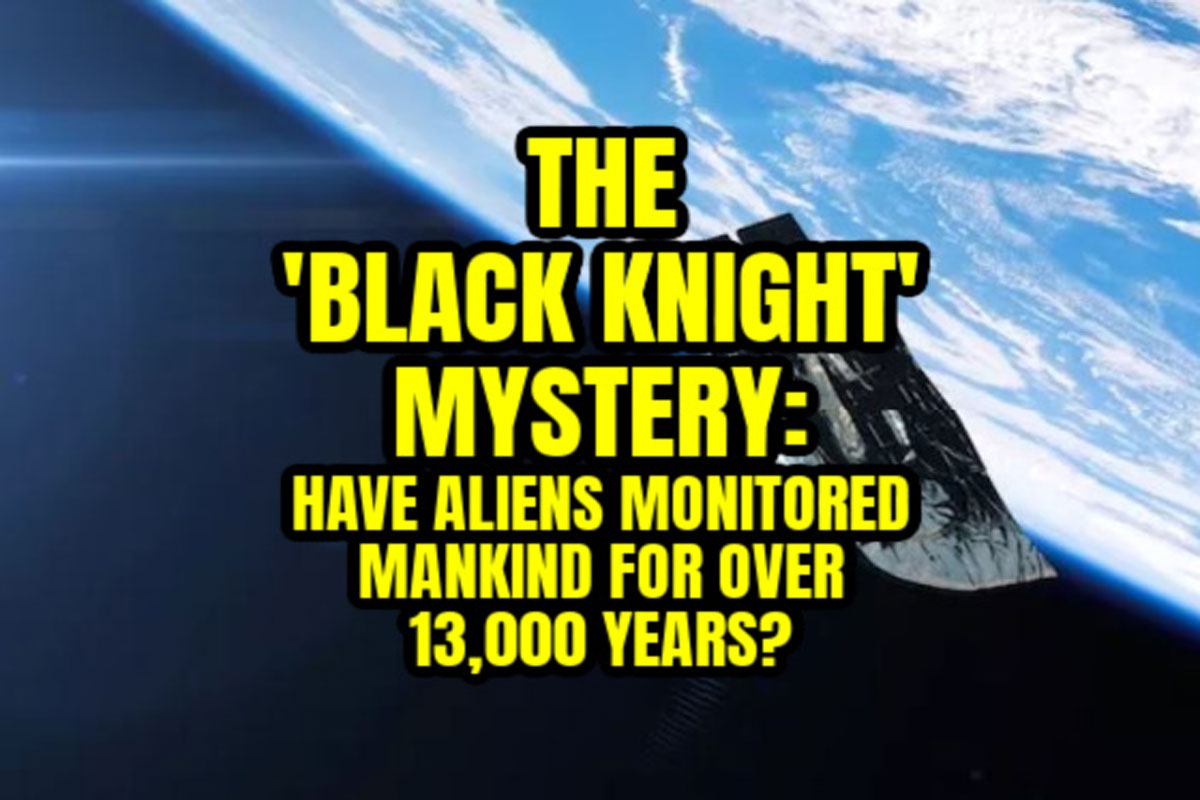 The ‘Black Knight’ Mystery: Have Aliens Monitored Mankind For Over 13,000 Years? 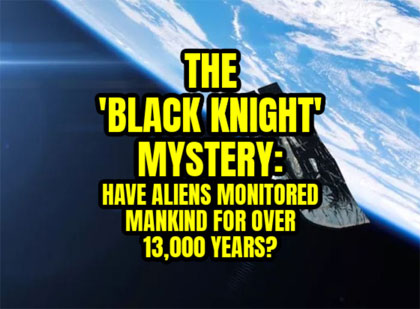 What is the ‘Black Knight?’ Is it an alien satellite that has been orbiting our planet and watching us for over 13 millennia? Or is it simply a conspiracy theory about a piece of space junk?

If you are into ufology or read about it, you might have come across the information about an unidentified object as the ‘Black Knight.’ In 2017, the British tabloids reported that an alien satellite was shot in the Earth’s orbit that had been spying on humans. The most famous photograph of The Black Knight was taken in 1998 by NASA experts. Conspiracy theorists believe that the image shows a satellite of the Earth of alien origin, which supposedly had been in Earth orbit for about 13,000 years. They argue that an unidentified flying object in Earth orbit is an alien satellite. According to their statements, NASA is hiding the truth about the origin of this UFO from the inhabitants of the Earth.

In June 2019, ufologist Scott Waring touched on this topic again, saying that he had discovered something unique in the photographs taken by the Apollo 10 spacecraft during a flight to the moon. He stated, “This is a near-Earth object that is very distant from the camera.” The specialist processed the picture in a photo editor to get a clearer image. In the frames received, Waring spotted a UFO with “large arms.” At the same time, Waring is sure that the “Black Knight” is captured in the pictures, which, he says, “is a proof of the absolutely amazing alien technology that is not available to us yet.” Some people believe that scientists are afraid to send an expedition to the “Black Knight” because they know that the aliens will protect it.

The moniker for this supposed satellite came from the Middle Ages, at the time of the knights. The knight who wanted to hide his identity or simply did not have heraldic signs was called ‘Black.’ The Black Knight is a lone knight, a skilled and shrewd fighter. But most often, the nickname is negative, hence the comparison. The Black Knight is also lonely and has no identification marks.

NASA carefully seizes evidence of the existence of this satellite and believes that the object is just space debris captured during Space Shuttle mission STS-88 in 1998. Ufologists believe that the size of the Black Knight is much larger than space debris, and the first photo was taken in 1958 by amateur astronomer Steven Slayton.

In addition, according to many videos, the Black Knight sometimes begins to blink its lights and move outside the orbit of the Earth, emit unknown signals, creating the feeling that someone periodically checks its readiness for flight. However, it is possible that the check starts automatically, and no one activates the ship on purpose.

The Black Knight was mentioned by Nikola Tesla in 1899. as well, Gordon Cooper, a Mercury astronaut, reported on the object in 1965. Astronomer Jacques Valle and others have done so since the mid-60s.

Back in 2014, I received the following information from an anonymous source:

“This image was provided by NASA so we can assume it is not a photo-shopped craft and is real. It is either an alien ship or part of the alleged secret space fleet protecting Earth; the top round device may be part of an offensive system

The International Space Station’s length and width is about the size of a 300 foot football field.

Alert: NASA has deleted all the links to these UFO photos as of January 2013. UFO sighting photos leaked out of NASA-Johnson Space Center.

Since the image came from NASA originally we can certain this craft was in space and appears to be large enough to hold a crew of six. Only the Extraterrestrials, Russians, the United States, and China are capable of launching a spaceship of this size. The circular disc at the top center may hold an advanced EM weapons system.”
Well, I’m not going to add to the argument of: ‘Is this an actual craft or merely space junk?’ 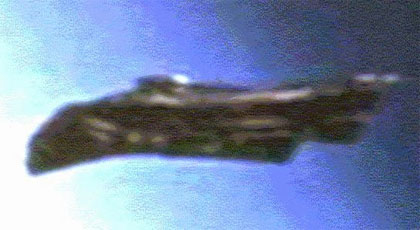 An object, supposedly orbiting Earth in near-polar orbit, has had ufologists and fringe authors in a tizzy since the mid-1950’s. Some believe it is approximately 13,000 years old and of extraterrestrial origin, and it has been transmitting radio signals for over 50 years now.

This object was photographed in 1998 during the STS-88 mission and has been widely claimed to be the Black Knight and an ‘alien artifact’. NASA contends that it is a thermal blanket that had been lost during an EVA during the mission. 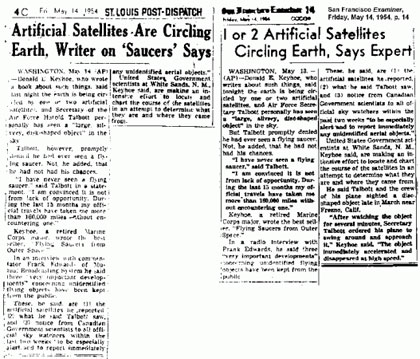 The story of the Black Knight started in the 1940′s when the St. Louis Dispatch and The San Francisco Examiner wrote about the ‘satellite’ on May 14th 1954. The Time Magazine wrote about it in the March 7, 1960 issue:

“Three weeks ago, headlines announced that the U.S. had detected a mysterious “dark” satellite wheeling overhead on a regular orbit. There was nervous speculation that it might be a surveillance satellite launched by the Russians, and it brought the uneasy sensation that the U.S. did not know what was going on over its own head. But last week the Department of Defense proudly announced that the satellite had been identified. It was a space derelict, the remains of an Air Force Discoverer satellite that had gone astray.” 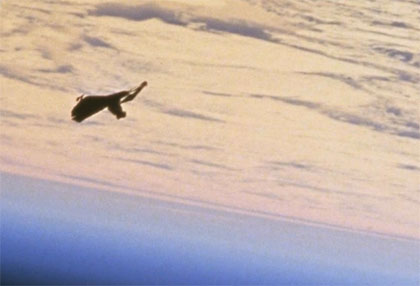 On August 23, 1954 the Aviation Week and Space Technology magazine released a story that riled the Pentagon, who were attempting to keep the information under wraps:

“Pentagon scare over the observance of two previously unobserved satellites orbiting the earth has dissipated with the identification of the objects as natural, not artificial satellites. Dr. Lincoln LaPaz, expert on extraterrestrial bodies from the University of New Mexico, headed the identification project. One satellite is orbiting about 400 miles out, while the other track is 600 miles from the earth. Pentagon thought momentarily the Russians had beaten the U.S. to space explorations.”
Over the years there has been plenty of speculation as to the origin and/or existence of the Black Knight. From astronomy novices to astronauts, the claims of an unknown object orbiting the Earth has persisted. What do you think it is? Lon 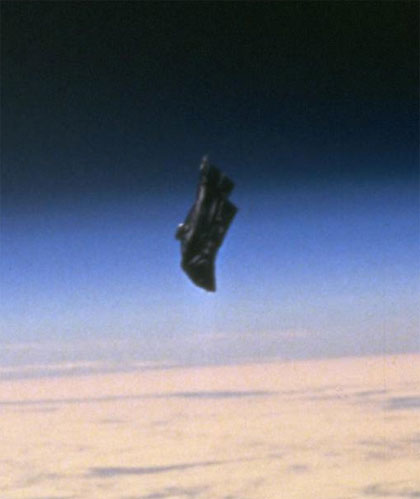 The Strange and Sinister Abilities of the Black Eyed Children: Mind-Control, Shape-Shifting and More