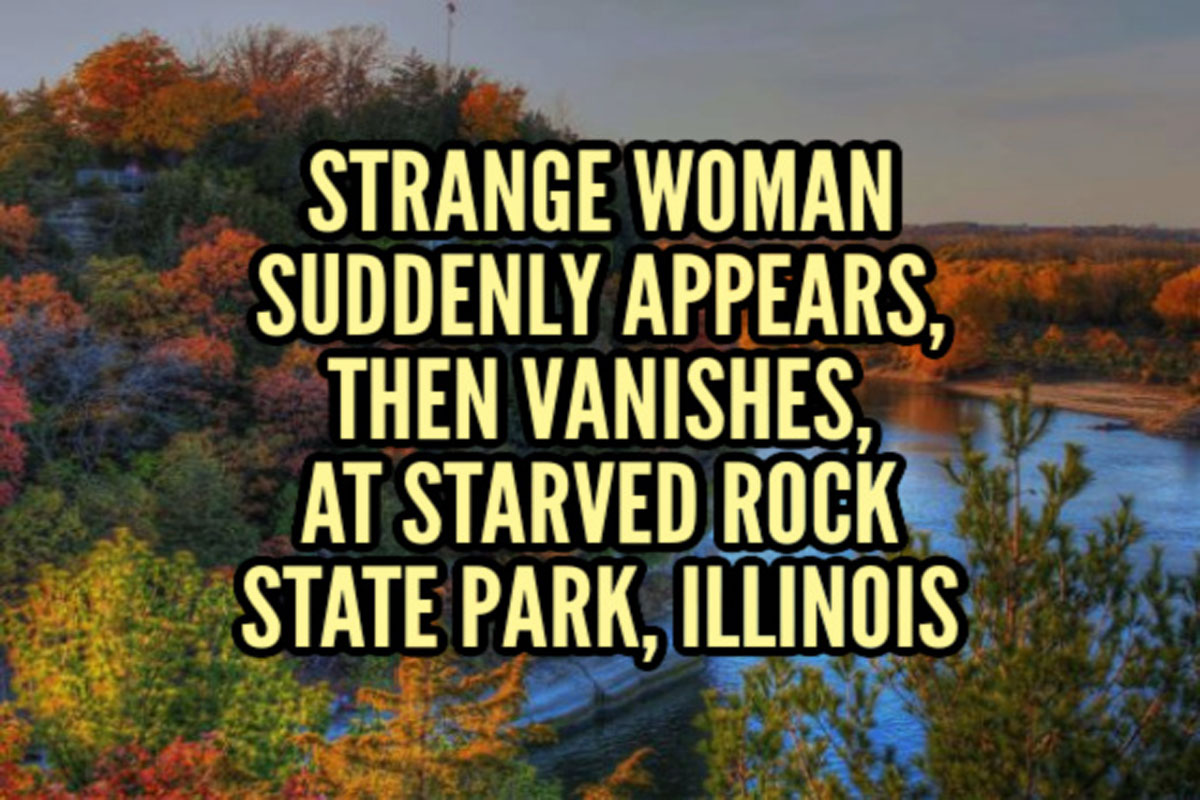 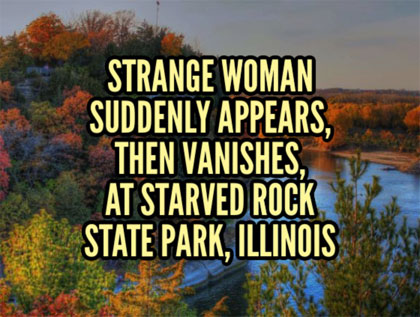 An Iraq War vet is hiking in Starved Rock State Park, Illinois when he becomes aware he is being watched. A strange woman suddenly appears, alarming him. Then she completely vanishes.

I recently came across the following odd encounter account:

I was visiting my girlfriend in Chicago. On a sunny and calm late autumn day we decided to go for a hike at Starved Rock State Park, IL. I am an avid hiker and being on leave from Iraq I wanted to take in some cool, fresh air. We hiked the park for several hours. In late afternoon we started heading back to the car. About 1/2 mile away from the parking lot we came into an area where tree branches were broken and pulled towards or over the trail. Most of the branches were broken high up, I’d say 8′ and more off the ground. I’d lived in Washington before going to Iraq and knew something of Sasquatch areas. So, I told the girlfriend it looked like a Sasquatch area due to the branches broken off up high and pulled over the trail. That’s about the time things started to get strange.

Soon after mentioning this I felt like someone was staring at me. It’s like if you go in a room with a lot of people and someone is focused on you, you get an uneasy feeling and can tell you’re being watched. It was like this but stronger. I started to look around to see who was watching me. It was late autumn and the forest was visible 100s of feet in all directions. There was a group of walkers several hundred feet behind us and no one in front of us but I saw no one staring at me. As we passed through the ‘Squatch’ area I began to have the feeling someone was behind me, following us. I looked around and listened but saw and heard nothing. There was just the people 400 feet or so back on the trail and they were talking amongst themselves. They weren’t looking our way. The sense of someone being behind me was persistent so I kept looking behind me I’d say at least twice a minute. But there was just the group way back. The feeling of being watched is one thing but feeling like someone is close behind you is something else. It is more disturbing. I told the girlfriend to go further in front of me and I let her go about 20 feet in front because I had a strong sensation of a nearby presence just behind us.

So I turn around not more than 30 seconds since the last time I looked back and there is this woman there. She was walking but coming up on me fast. There was something way off about her speed. She was walking when I spotted her, but her speed was much faster than her gait. It was as if she was on a people mover escalator like in an airport. She was coming up fast and was, I’d say, no more than 15 or 20 feet behind me when I saw her. I was rather alarmed and glared at her. She stopped when our eyes met. I gave her a look like ‘WTF are you doing coming up on me like that!’ We stood there staring at each other. Neither of us moved. She had her head cocked back, to her left and looked at me from the corner of her eyes in a slightly alarmed ‘you caught me’ type of look. She was completely normal looking, like a local Chicago lady, late-50s, wearing a bright red winter coat, gloves, slacks, etc.

In hindsight there are a few other things besides her speed which stand out. The first thing is there was no sound, no footsteps, no rustling in the woods nothing to tell me to turn around other than the strong sense of something behind me which I’d had for a bit . At the speed she was moving she would have had to have been running hard but I heard no footsteps. She was not breathing hard and her mouth was closed. Her gait was a walking gait. She was not running. However, she was moving towards me at a running speed. I mean fast. When she stopped I’d say she was less than 20 feet from me. At the speed she was moving in 1 or 2 seconds she’d have been on me.

The next thing that stands out is her features. She had no distinguishing features. None in her hair, skin or clothing. No shadowing or skin hues, dimples, etc. As a former Army criminal investigator I know to look for distinctive markings on people and clothing. There were none. I’d estimate her height at 5’10.” Her clothes were of uniform coloring and indistinct. It was like she just stepped out of a department store. Her bright red coat was pristine with a uniform hue to it. There wasn’t even shading, which there should have been given the clear sky and low sun.

After staring at each other for I’d say 5-10 seconds I felt like I got my point across so I turned around and continued walking. The girlfriend had not noticed anything and had continued walking. I took about 3 steps and realized there was no way she could have come up from that group in the 30 or so seconds since I’d last looked back. There was also no where to come from on either side. Visibility at that point was hundreds of feet all around. I said to myself “no way!” and spun back around. She was gone. Simply vanished. I checked the group behind us and no one had a red coat on or was looking at us. There was no one else around and there had been no sounds other than my foot falls. The woman just vanished.

From that point it took us about 10 minutes to reach the car. For the remainder of the walk I did not feel like I was being stared at or followed. I have never been back to Starved Rock State Park and have no intention of going back.

The whole thing was bizarre. How was I supposed to tell anyone about that? So I never have. My mental state was fine. I have a high IQ and a 20 year career in a STEM field following Army service. At the time I was working a DoD IT contract in Iraq. I was well rested and relaxed being on vacation with the girlfriend. There were no drugs or alcohol involved. These are strictly prohibited in my line of work and were grounds for immediate termination under MNFI’s GO 1 which I was subject to at the time.

I’ve carried this experience around for 15+ years being unable to talk about it because it is was so exceptional and unexplained. It’s a relief to read similar stories of unusual encounters and disappearances. After reading many Missing 411 accounts and the profile of disappearances I believe I narrowly averted being snatched by whatever that thing was. I do not think it was the woman I saw. I think it was something different which I could not see.” J

NOTE: I have heard of other unexplained incidents at Starved Rock State Park, Illinois before. Is there something special about the location? Lon