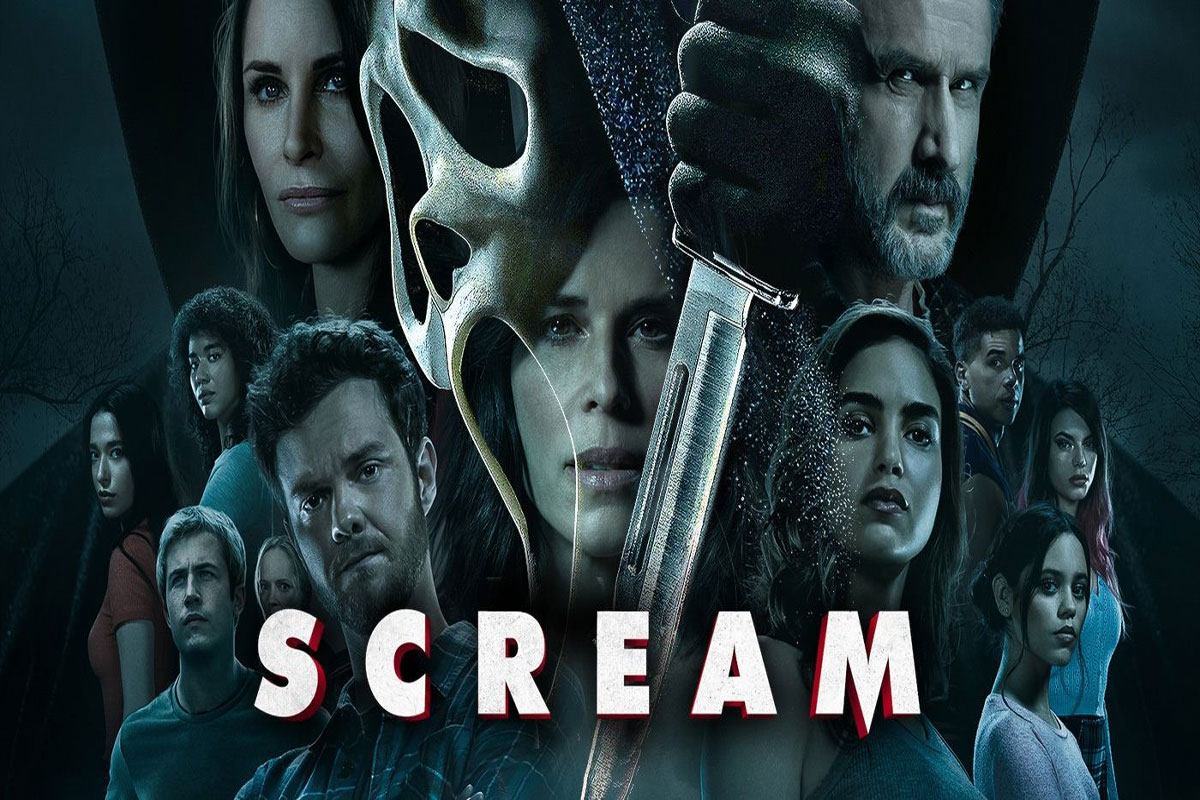 “SCREAM’’ was a big hit when shown in 1996 that it produced three sequels, all directed by Wes Craven who has since passed in 2015. The lead star is Neve Campbell as Sidney Prescott, who is stalked by a series of killers all wearing the Ghostface mask. She is supported by David Arquette as policeman Dewey Riley, Courtney Cox as reporter Gale Weathers and as film geek Randy Meeks.

After “Scream 4”, in 2011, they made a “Scream” TV series with new characters that ran for 3 seasons. And now, we have a new “Scream” movie which has new characters but also have Neve Campbell, David Arquette and Courtney Cox reprising their former roles in it. It’s now directed by Matt Bettinelli Olpin and Tyler Gillett, best known for the comedy horror hit, “Ready or Not”, which we really enjoyed.

The story is still set in the original town of Woodsboro and starts with a teenager, Tara Carpenter (Jenna Ortega), alone at home when Ghostface suddenly appears and attacks her. She got several stab wounds and lands in the hospital.

Her older sister, Sam (Monica Barrera), lives in Modesto and learns what happens to her so she returns to Woodsboro to visit Tara, along with her boyfriend Richie (Jack Quaid.) Sam and Tara are actually estranged from each other. Sam eventually reveals to Tara the reason why she left their town.

She learned that her biological dad is Billy Loomis (Skeet Ulrich), the original killer in the first movie. When she asked their mom about this, her dad was there and this resulted in the break up of their marriage. Sam gets to meet Tara’s friends: Wes (Dylan Minnette), Amber (Mikey Madison), twins Chad (Mason Gooding) and Mindy (Jasmin Brown) and Liv (Sonia Ammar).

While in the hospital, Sam is also attacked by Ghostface but she manages to evade him. She then visits Dewey to ask his help in tracking down the killer. Dewey then contacts Sidney and Gale to warn them that Ghostface has returned. Wes and his mother, Sheriff Judy Hicks (Marley Shelton), are then both killed by Ghostface in their very own home.

Sam, who is having hallucinations where she sees her late killer dad talking to her, is then accused as the killer. As they say, the plot thickens. But just like before, “Scream 5” combines the elements of black comedy, a whodunit story and the blood and gore of the slasher genre. It makes irreverent fun of reboots and sequels and comments on horror fandom culture.

A character in the film says it’s actually a re-quel, a combination of a reboot with new stars and a sequel with characters from past films that viewers are already familiar with. In other words, it’s a blending of nostalgia for older audiences with some witty post-modern elements meant for younger viewers.

The new directors acknowledge that what they’re doing is not entirely original and the characters pay knowing winks to other horror movies like “The Babadook”, “The Witch”, “Psycho”, “Hereditary” and “It Follows” that they cleverly call as “elevated horror”.

As a slasher film, it does deliver and lovers of gore won’t be disappointed as the staging of the killing scenes are all brutal and gruesome. We just wish we were given new characters that are more compelling and we can really care about. Our reaction to some of them when attacked by Ghostface is: “Buti nga sa inyo.”

The lead actress, Melissa Barrera as Sam (“In the Heights”), cannot totally get our sympathy. She’s forever taking pills and bickering with the friends of her sister Tara. It’s good Neve Campbell is in fine form as Sidney, a legacy character who returns to Woodsboro for some unfinished business, mixing humor and vulnerability in her performance.

No doubt “Scream 5” has given the franchise a new spin. It’s a big hit worldwide so we read that they will soon be shooting “Scream 6.”