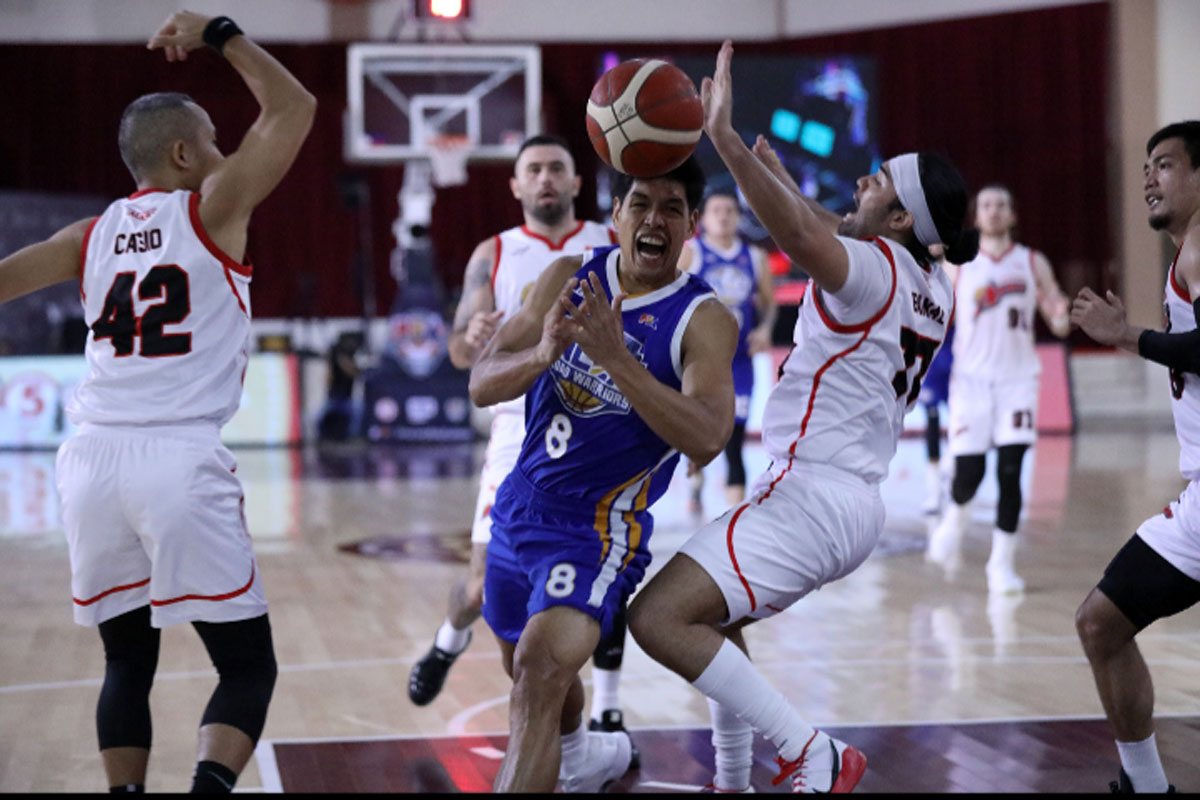 Don Trollano of Talk N Texr and Gab Banal of Alaska battle for ball possession in this bit of action in the PBA at the Don Honorio Ventura State University gym in Bacolor, Pampanga. PBA photo
Basketball,

NO Kiefer Ravena, no problem for NLEX.

As far as NLEX coach Yeng Guiao is concerned, the team will now have to do it by committee.

With several veterans stepping up in NLEX’s convincing 84-74 win over Alaska Milk, Guiao couldn’t be happier.

“Without Ravena, we have to do it by committee. No just one guy could step into those shoes,” said Guiao after the Road Warriors’ third win in five matches at the Don Honorio Ventura State University gym in Bacolor, Pampanga.

“I’ve said it before, that losing Kiefer is like losing your right hand. So we have no choice but grow another hand or look for a prosthetic,” added Guiao, referring to his superstar player who is working on his requirements to play as an import for the Shiga Lakestars in the Japan B.League.

“We have to distribute that responsibility to the rest of the team.”

Four players — JR Quiñahan, Kevin Alas, Jericho Cruz and Kenneth Ighalo — stepped up for the Road Warriors, who moved into a tie with San Miguel Beer in the standings of the coronavirus-delayed conference.

Quinahan led the way with a game-high 18 points for NLEX, which also missed the services mof Anthony Semerad, whose wife just gave birth, and Raul Soyud, who is still recovering from a sprain.

Cruz contributed 15 points, four rebounds and four steals, while Ighalo, who saw action for the first time in the conference, had 15 points on a very efficient 6-of-8 shooting for NLEX.

“We have not given him the opportunity to play previously, but he proved in this game that he would deliver if given the chance, explained Guiao, who claimed the pre-season arrival of other players crowded Ighalo for the small forward position.

“But when he is able to step uplike this he really justifies the playing time given him. I think Ighalo is a close Best Player to Kevin dito sa laro na ito.”

Maverick Ahanmisi and Mike Digregorio shared scoring honors with 17 and 16 points for Alaska, which dropped its second straight game for a 2-4 record.

Wright’s lone field goal basket for the night saved the day for the Fuel Mssters, who rallied from as many as 17 points deficit Beau Belga had a chance to send the game into overtime for the E-Painters, but missed the last-end of two crucial charities with 1.0 second left.

Before his heroics, Wright was 0-of-15 from the field.

Jason Perkins took up te cudgels for Phienux with a double-double of 18 points and 12 rebounds.

RR Garcia also stepped uo with18 points, including timely baskets that pushed the Fuel Masters ahead, 76-74, after a long chase.

Magnolia back in business