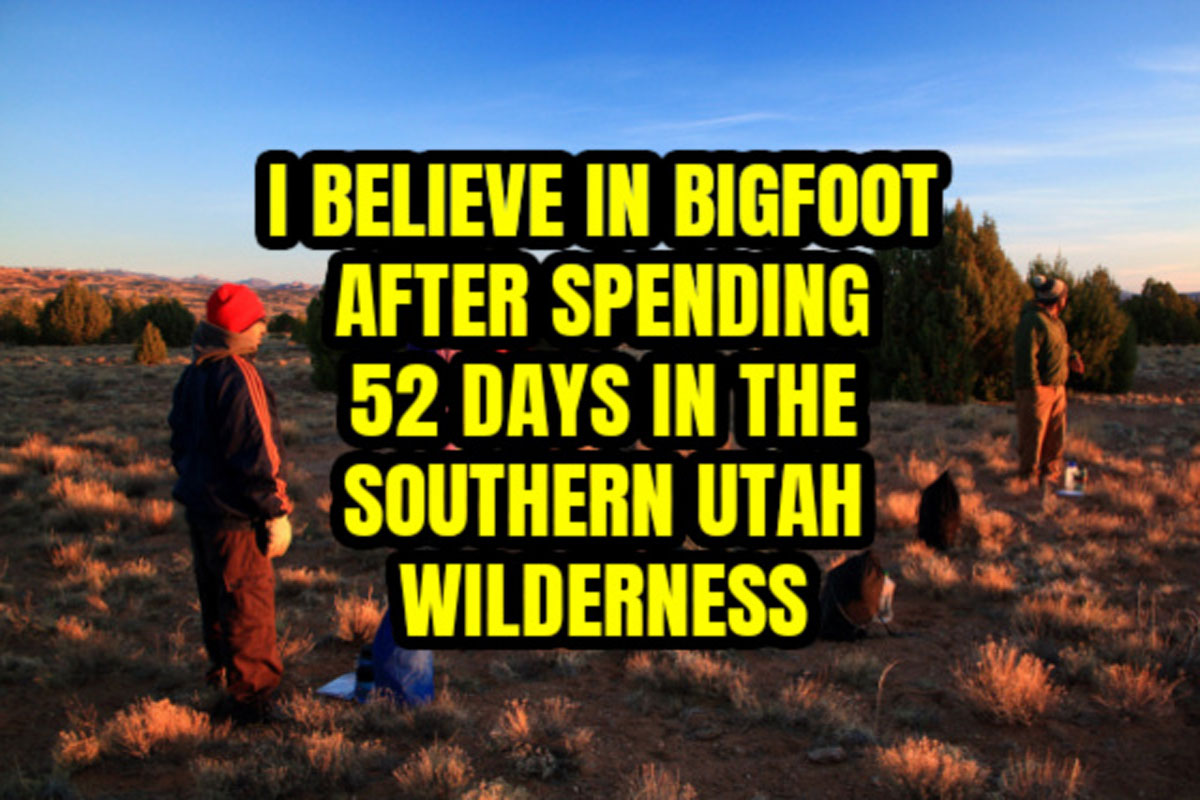 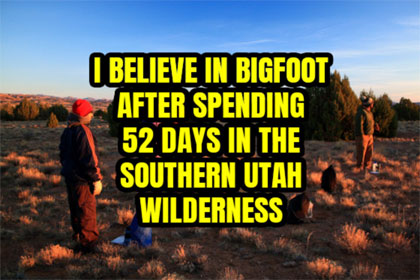 A young man was placed into a wilderness rehabilitation program in southern Utah. While hiking and camping over an extended period, he recalls evidence that suggested Bigfoot habitation.

“I was in a wilderness program in 2004 when I was 17 and supposed to hike from point A to point B with 11 other kids. But someone got hurt and we hiked straight down the mountain to the first flat clearing we could find so a helicopter could pick up the hurt boy. We camped in an area that was miles from our intended destination, far off the beaten path. When we woke up the next morning there were, what appeared to be, Bigfoot prints running through the middle of the camp and a tuft of orange/brown/gray hair stuck to a tree branch that was thicker and coarser than anything any of us had ever seen before.

I had this experience in June of 2004 and never thought about it again until a few years ago when I came across my journal entry from that time. Once I read it, everything came flooding back and has become the foundation for my personal belief in Bigfoot.

To help you understand why I feel so strongly about their existence, I need to explain why I was in the middle of the wilderness, to begin with. I grew up in an affluent part of Southern Orange County, CA, and began abusing drugs pretty early (too much time + too much money = bad habits) on so I was what you would consider a “troubled teen”. Right after I turned 17 in April of 2004 I got sent to a wilderness rehabilitation program called Aspen Achievement Academy based out of Loa, Utah, about 3-4 hours south of Salt Lake City. After I changed clothes and received gear, I was transported by van to this big open area off a long dirt road and then someone walked me another half hour or so to meet my group. I don’t know many specifics about where we camped or where we hiked throughout the entirety of the program, as they never really told us much at all. We didn’t have contact with anyone other than our group leaders and a therapist that would come periodically. I was in this program, in the middle of the wilderness, always at least 2.5 – 3 hours and many miles away from civilization.

We would hike from water source to water source and we were resupplied every 8 days when the staff changed over. I was in the wilderness for a total of my 52 days in that program. I do know two locations we hiked to: a place called Ledge Lake that was on the edge of a huge cliff probably 300 – 400 feet above the forest floor below (looking south) and I also know we hiked and camped at a place called Miller Creek Cove. So, all I know was that we were somewhere in the southern Utah wilderness most of, if not, the entire time. Oh, and also, we had to write a one-page journal entry every day before dinner and it is this journal I found more recently that reminded me of the incident.

On 6/11/04, day 35 of my program, we had a 10-mile hike planned to reach the next water source. We never hiked longer than one full day without making it to a place we could fill our Nalgene bottles. We only carried what we needed, we were literally in the middle of the wilderness and could not physically carry non-essential items, even if we wanted to. During this particular hike, one of the other kids named Robbie, hurt his knee really bad traversing the side of this mountain so we had to change course and basically bushwhack straight down the mountain from where we were to find a clearing where we could set up camp. Everyone divvied up Robbie’s gear, plus two other guys’ so they could carry him down. When the ground leveled out at the bottom we came to a trail; think less hiking trail and more game (animal) trail. The trail came to a T and where we came down was basically at the top of the T. We hung our food bags 25-30 yards to the right and we made camp about 50 yards further down the trail at the bottom of the T path on both sides of the trail. The forest was really dense, you could never really see further than about 25-30 yards because of how many trees there were but there was enough of a clearing along this path that all 12 of us could spread out on either side of the trail and make a shelter out of our tarp and cord.

When we woke up the next morning, (I wrote in my journal later that night on 6/12/04) – “There were these crazy big foot prints going through the site and hair was found high up in a tree about shoulder height.”

I remember, specifically, the footprints were at least the length of my elbow to the tips of my fingers. I was fully grown at 6’0 when I was 17 so looking at my arm now it would have had to have been about 18 inches long and maybe 6 inches wide. I don’t remember it looking any different than the shape of a normal human foot, just freaking gigantic. Knowing what I know now, I would have documented the crap out of it and measured every toe and ridge and everything. I remember the gait was large enough that I felt like I was halfway doing the splits to reach each one and we were all laughing about it. Another thing I remember was how hard-packed the trail was and that none of us, including the staff (200+ lbs. dudes), could make an impression in the dirt even remotely close to as deep as these giant footprints were. Deep enough that the ground looked like it was soft when the footprint was made and then it dried completely hard as a rock in the morning by the time we found them but it didn’t rain at all that night before and they weren’t there when we got there the afternoon before. The footsteps went from the bottom of the T and then made a right toward the hanging food bags. Another 15 feet or so past the food bags, one of our counselors reached up and grabbed a tuft of hair that was stuck to a branch on the left side. My journal entry says it was “shoulder height” but I remember him physically reaching up to grab it. I can’t explain this discrepancy other than I either wrote it wrong then or I am remembering it wrong now.

In hindsight, I wish I would have smelled the hair and kept some of it. Anything more than having 15 minutes of “wow, that’s weird” and then moving on and forgetting about it. I remember the hair was a light orange/brown but with lots of gray in it. Like an aging ginger’s beard. I remember it was much more coarse and wiry than anything I had ever seen in my life. I wish I would have freaking smelled it just to have another sensory memory of the whole thing!

That quote I put in the paragraph above is the only thing in the journal entry about it. I’m sure I had heard of Bigfoot before this happened but I wasn’t into any of that sort of stuff (cryptozoology, conspiracies, etc). UFO’s I’ve been into since childhood, from watching X-Files in the early ’90s, until in my mid 20’s. So it is reasonable to me that I only wrote that one sentence about how crazy it was and then left it at that.

Another strange thing from that morning, that may be unrelated but is also crazy, is that there was a large tree in the clearing where we set up camp,. While we were looking at the footprints, another kid noticed these super deep claw marks going up the trunk. At the time, we thought maybe a mountain lion or something similar was up the tree, stalking us overnight because we were in their territory or something. The claw marks were narrow, maybe half an inch wide and at the deepest point maybe an inch and a half or two deep and they were still fresh with the green of the Aspen tree underneath. I like to think that whatever it was scrambled up the tree when Bigfoot came walking through our camp and maybe Bigfoot even saved one of us from being eaten or attacked that night. That’s just me letting my imagination run with it, though. I don’t even know if these two things are related, whatsoever, they just both happened around the same time and it’s cool to think about.

One last thing. I remember one of the counselors said he had a friend that was some kind of scientist and did something with wild animals. But I don’t know in what capacity or anything more and he was going to take the hair we found over to him to have him look at it. The next week when he came back (8 days on, 6 days off schedule for counselors), all he said was that he gave it to said friend, and the friend stated he had never seen anything like it and would get back to him.” P 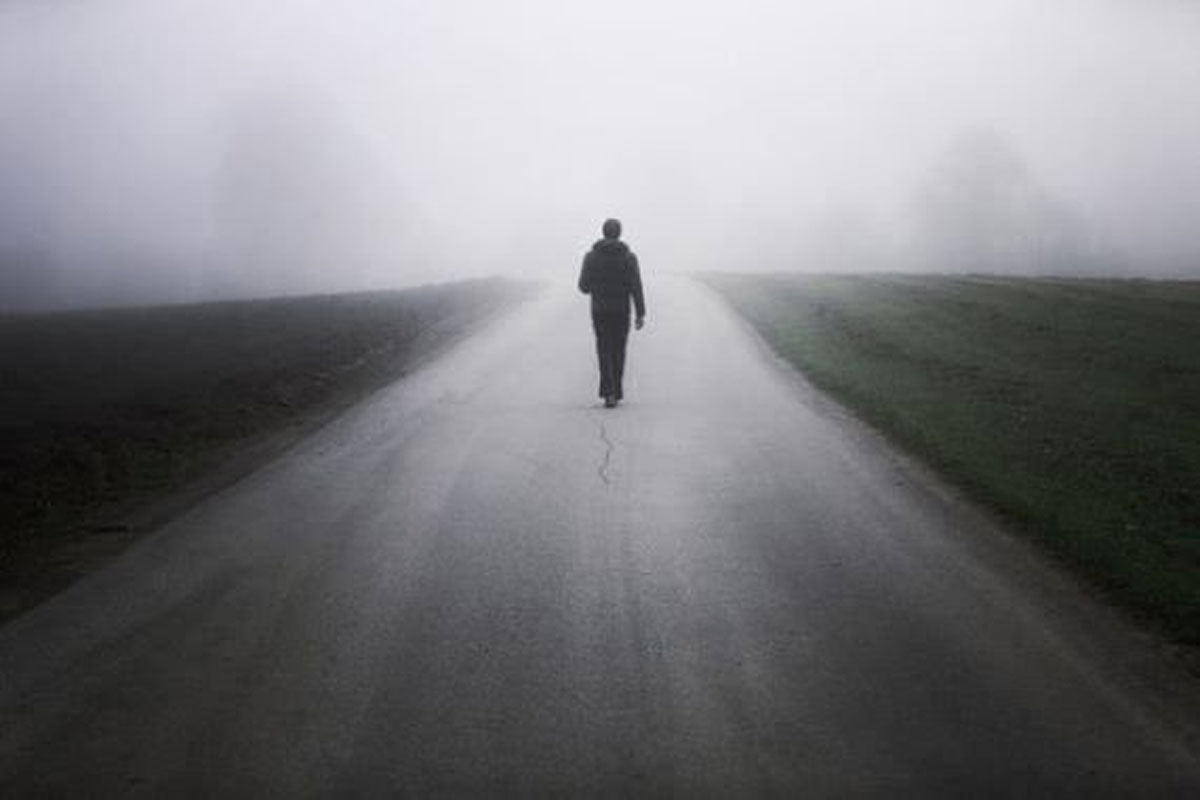 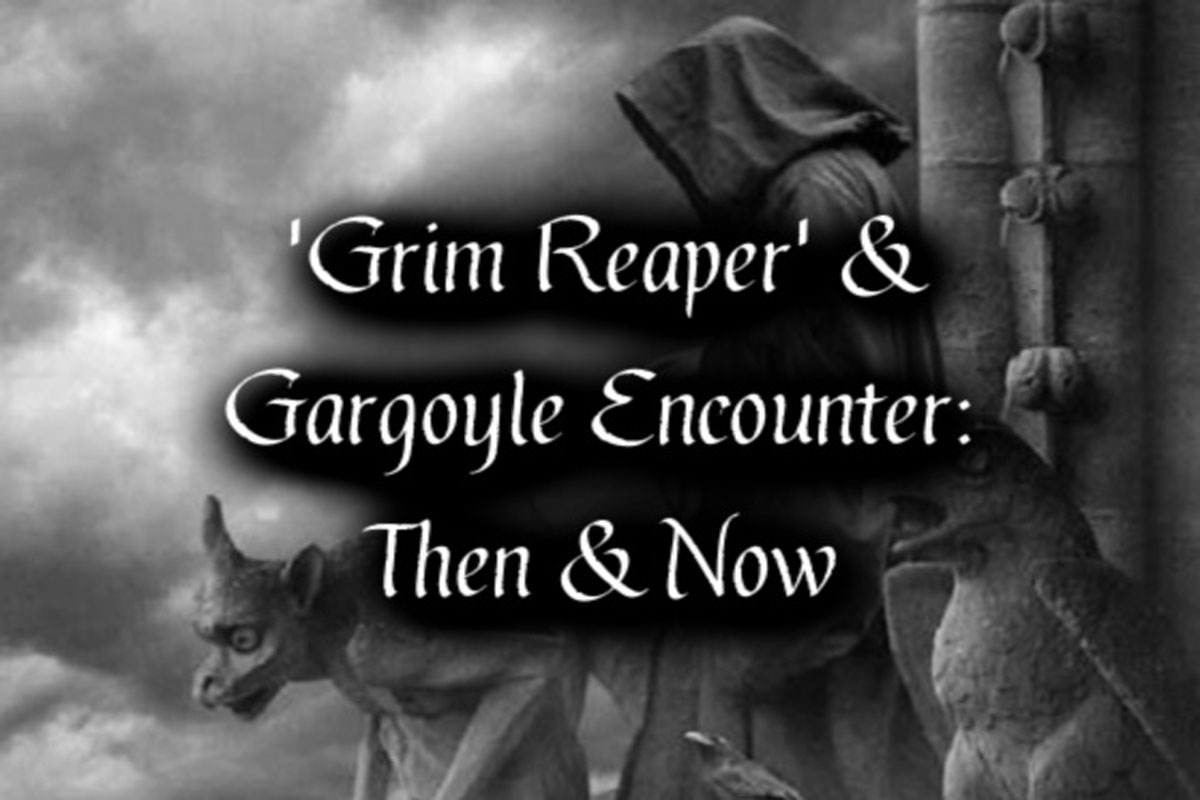 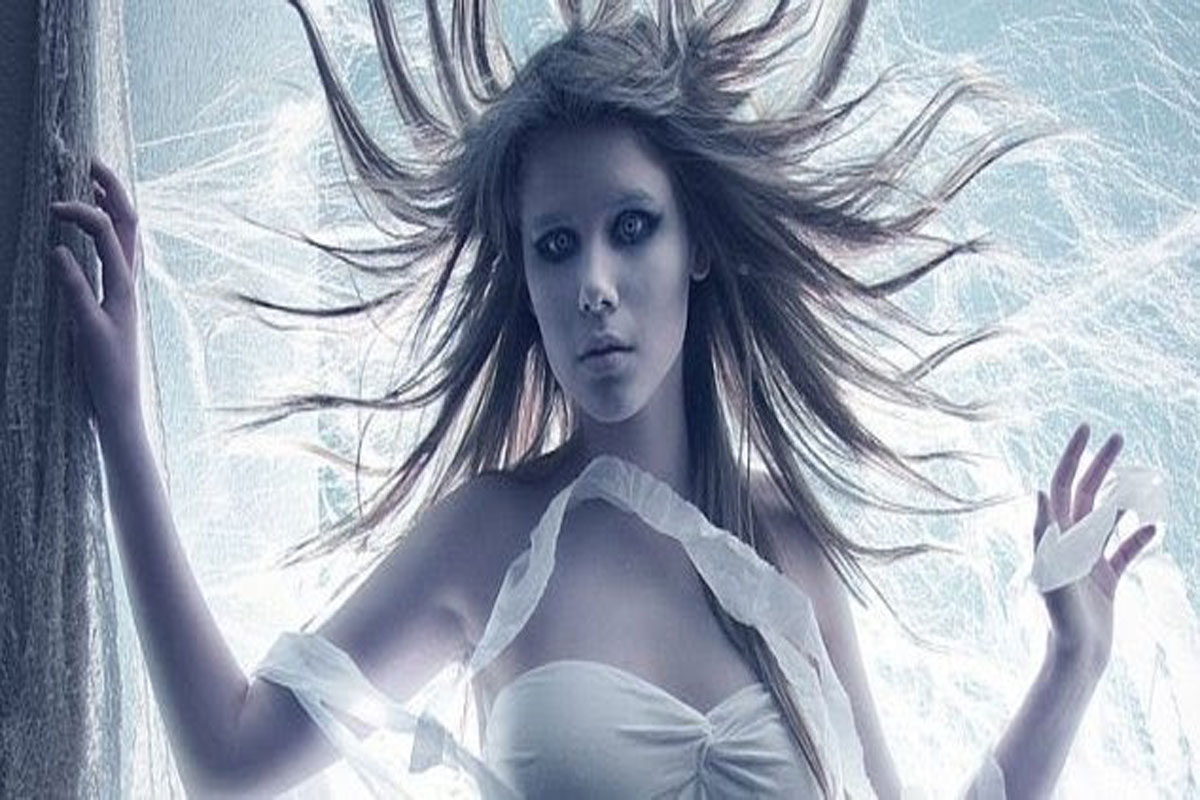 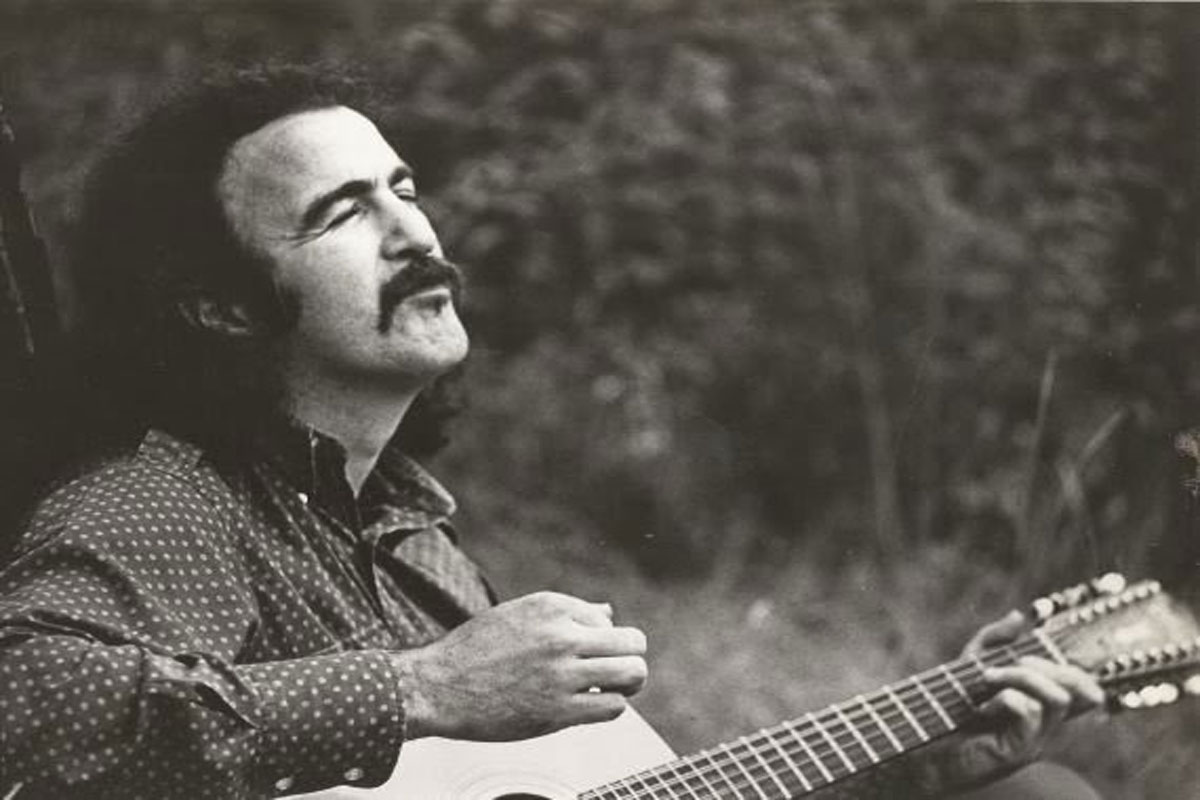 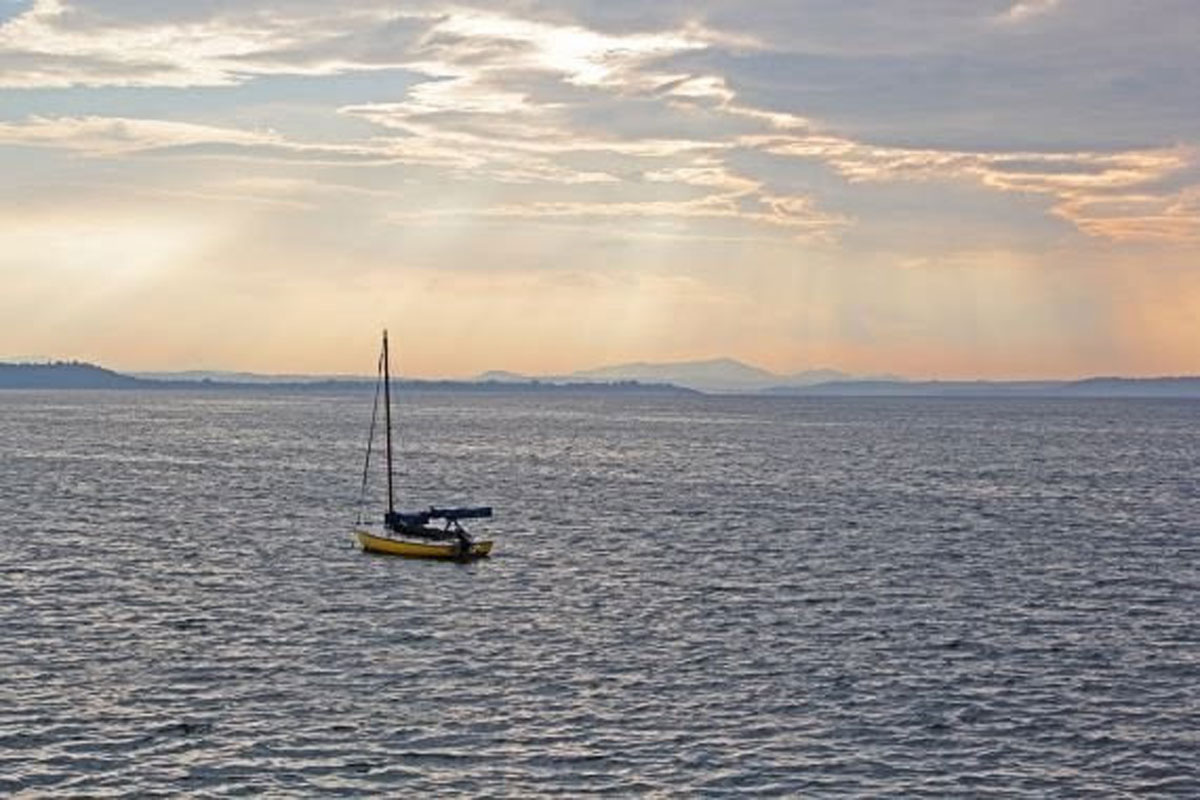