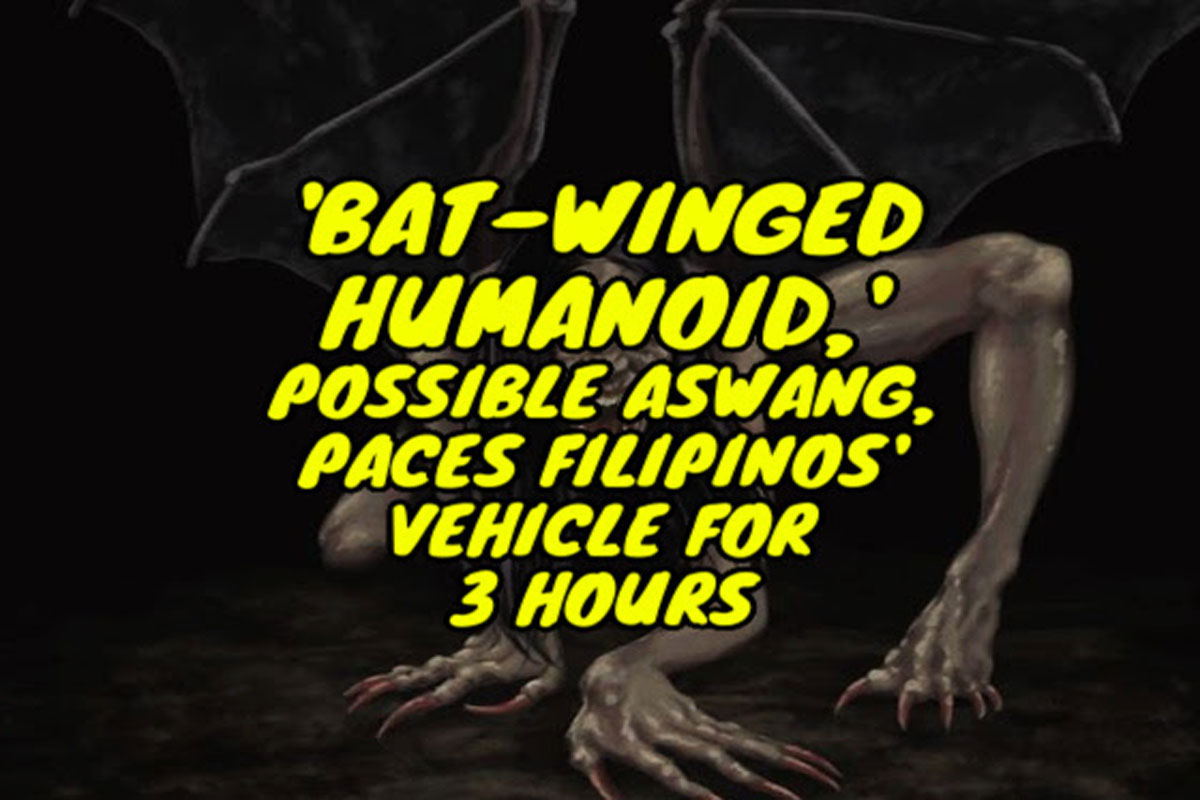 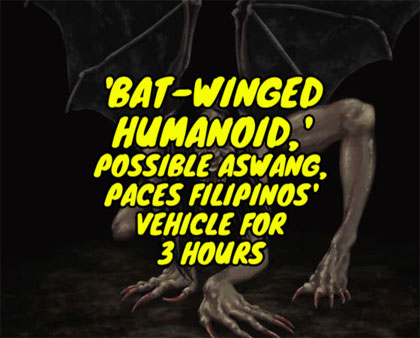 A group of friends in The Philippines encounter A black-skinned bat-winged humanoid that is keeping pace with them as they are driving. The event continues for about 3 hours.

“This encounter happened in 2012 in The Philippines which, until now, me and 3 other friends could not find any answers to.

We just finished sending off a friend in an airport in the city Subic, so we started heading home at around 4 PM. We lived about a 3-hour drive away and right about 5 PM, when the sun started to go down. and darkness began enveloping everything. A figure caught my eye, hovering just a few meters above and sometimes beside our car. It looked like a black-skinned full-bodied small human with bat-like wings and legs tightly fused together as if conjoined. It started to appear somewhere in Tarlac, a farming province, through small-populated towns with roads lined with thick trees traversing endless rice fields. My friends saw it too and we did not become horrified by it, but rather all questions ran through our heads and through us finding out why was it there, and what it was.

It just hovered and flew at the speed as our car and every turn we made it it also did. It was following us. I took out my phone to take a photo of it, but the darkness prevented me from taking any good shot as it was almost completely dark and this creature goes so high and only reappeared from a good distance good enough to be seen. I lit a flashlight onto it from time to time but it was so good at avoiding it. Sentient. We did not want to provoke it, so we just drove on. My friend, who was driving, saw the creature occasionally on his side mirror, but just calmly drove on. Its face was black and as if all facial parts have marbled with the black leathery skin that covered every inch of its body at least from a distance of judgment.

The fright we felt turned into calm and eventually to folly. We couldn’t understand why this creature was following us. It sometimes hovered as close as maybe 5 meters and sometimes suddenly disappeared in the thickness of trees. For a couple of hours it followed us until we reached the city where we lived. It just vanished just like that.

There were 4 of us who saw the creature and, to this day, we couldn’t find any convincing explanation to it. Yes, it stopped following us after a few hours drive, but we know it’s still out there following someone else at this very moment.” A

NOTE: There are a few winged humanoid legends in The Philippines. But the most well-known is the ‘Aswang.’ Another is the ‘Manananggals.’ I have included a few links from other similar sightings. Lon