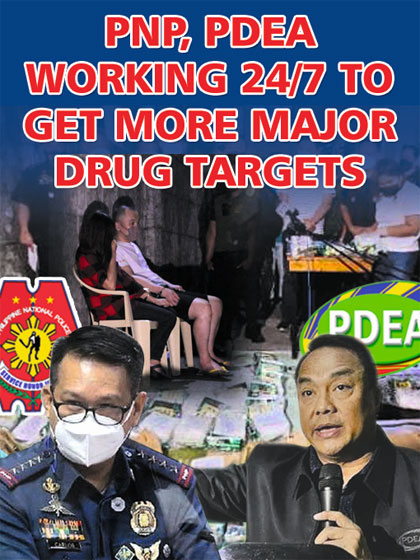 OFFICERS and men of the Philippine National Police (PNP), Philippine Drug Enforcement Agency (PDEA) and other law enforcement agencies in the country are not resting on their laurels and are continuing to work round-the-clock to hit more ‘high-value targets’ specifically foreign shabu smugglers and distributors and their rogue Filipino contacts, the Journal Group was told yesterday.

PNP chief, General Dionardo B. Carlos has cited the PNP’s enhanced partnership with the PDEA headed by his classmate from Philippine Military Academy ‘Maringal’ Class of 188, Director General Wilkins M. Villanueva as a major factor in a string of successful anti-narcotics operations in the country this month which netted more than P 1 billion worth of shabu.

“Our much stronger partnership with the PDEA has resulted in a series of intelligence-driven operations which resulted in the confiscation of over P1 billion worth of shabu and the arrest of a number of high-value targets,” said the PNP chief.

Seized during the operation were 160 kilograms of shabu worth P1.088 billion.

Villanueva said the Valenzuela City operation was a follow-up to a March 1 sting in Cavite which netted two kilos of shabu worth P13.6 million and an ‘HVT,’ a buy-bust operation in Bulacan last March 2 when an ‘HVT was also collared after selling 60 kilograms of the so-called ‘poor man’s cocaine’ worth P408 million to an undercover officer; a sting in Cebu last March 3 where four suspects were jailed after conspiring to sell 200 grams of shabu worth P1.36 million; and another operation in Escalante City in Negros Occidental last March 4 where an HVT was arrested after selling 5 kilos of shabu worth P34 million to an agent.

The operations resulted to the seizure of 231.2 kilos of shabu worth P1.57 billion.

Last March 9, PNP-DEG agents, joined by operatives from the PDEA, NCRPO, AFP, NICA and BoC arrested Chinese nationals Shiliang Zeng,49; and Jack Lee,44, during a buy-bust operation inside the Nice Hotel in Bgy. Rodriguez, Quezon City which resulted to the confiscation of three kilos of shabu worth P20.4 million.

Last March 23, PNP-DEG officers, with the support of agents from the Q.C. Police District headed by Brig. Gen. Remus B. Medina, the BoC, the PDEA-NCR, the NCRPO Regional Drug Enforcement Unit under Major Gen. Felipe R. Natividad and the PNP Criminal Investigation and Detection Group under Major Gen. Eliseo DC Cruz conducted a drug interdiction operation along Mindanao Avenue in Q.C. which led to the arrest of three suspects and the recovery of around 50 kilograms of shabu worth P340 million.

On the same day, PNP-DEG agents also arrested three drug targets during a sting in General Trias City, Cavite which resulted in the confiscation of a kilo of shabu worth P6.8 million.

Villanueva: Law of supply & demand not only factors in price of shabu

Villanueva has cited a number of factors—not only the law on supply and demand—in determining the price of shabu and other illegal drugs in the country.

“As a general rule, the price structure of illegal drugs in the streets rests on their availability and demand. As the market price of illegal drugs increase, it can be expected that there is scarcity in supply, and vice-versa,” said the top PDEA official as he maintained that the drugs’ ‘supply and demand’ are not the only factors in understanding the price of drugs in the underground market.

“However, the illegal drug trade seemingly bends that law due to several factors influencing the end price of illegal drugs. It is a common assumption that when authorities seize a large volume of illegal drugs, the street price will likewise increase due to the constricted supply. This is not necessarily the case,” the PDEA chief added.

The official said their investigation shows the following factors dictate the actual street price of drugs: highly regulated commodity; distribution costs; competition among local players; hoarding of supplies by some players to control the price; alteration of quality, to maximize profit; and higher barrier of entry for new players.

Dangerous drugs are classified as prohibited commodities and as such, carry expensive price tags. The reasons for their high mark-up prices are because they are high in demand and are difficult to obtain, he explained.

Villanueva said that distribution costs of various chain of expenses on the part of supplier and distributor of illegal drugs for their product to reach the consumers, include bribes, packaging, transportation costs, manpower costs, among others. “These costs have a direct impact on the street price of drugs causing it to be higher,” he said.

The PDEA chief said they found out that local drug syndicates compete in the same niche to earn and keep customers, generate revenues and gain more market share.

“While their rivalry promotes competitive pricing affecting the illicit drug trade adversely, they limit the competition among themselves to discourage the entry of new players. They also resort to hoarding a sizable supply of drugs with the intent to inflate the market price,” he said.

Villanueva emphasized that the intensified anti-drug campaign has dwindled the supply of methamphetamine hydrochloride, or shabu, in the market, forcing local drug syndicates to dispense either low-quality, adulterated or fake shabu to their suppliers, distributors and pushers – searching for ways to reduce costs while increasing profitability.

The price structure of shabu varies depending on the area or place of transaction, payments, and on the quality/purity of the substance. Its current street price in the local market ranges from ₱6,000 to ₱8,000 per gram.

“Illegal drugs are considered as inelastic goods. The reason is that, not all consume illegal drugs, therefore will not translate to more users, but increase in the quality of drugs they can afford,” he said.

“In economic perspective, if there is an abundance in supply, it will not immediately translate to increased demand or lesser price. However, in the long run, the increase in supply will increase the number of users because of its prolonged availabilities in the streets, but not drastically,” Villanueva explained.

In order to solve the country’s drug problem, the PDEA chief said there is a need fight the problem holistically through enforcement or suppressing the supply and arresting traffickers, rehabilitate users and reform offenders.

“It is evident that the drug price should not be the exclusive basis in assessing the status of the local drug trade but it remains an integral aspect of the drug situation,” the PDEA chief said.