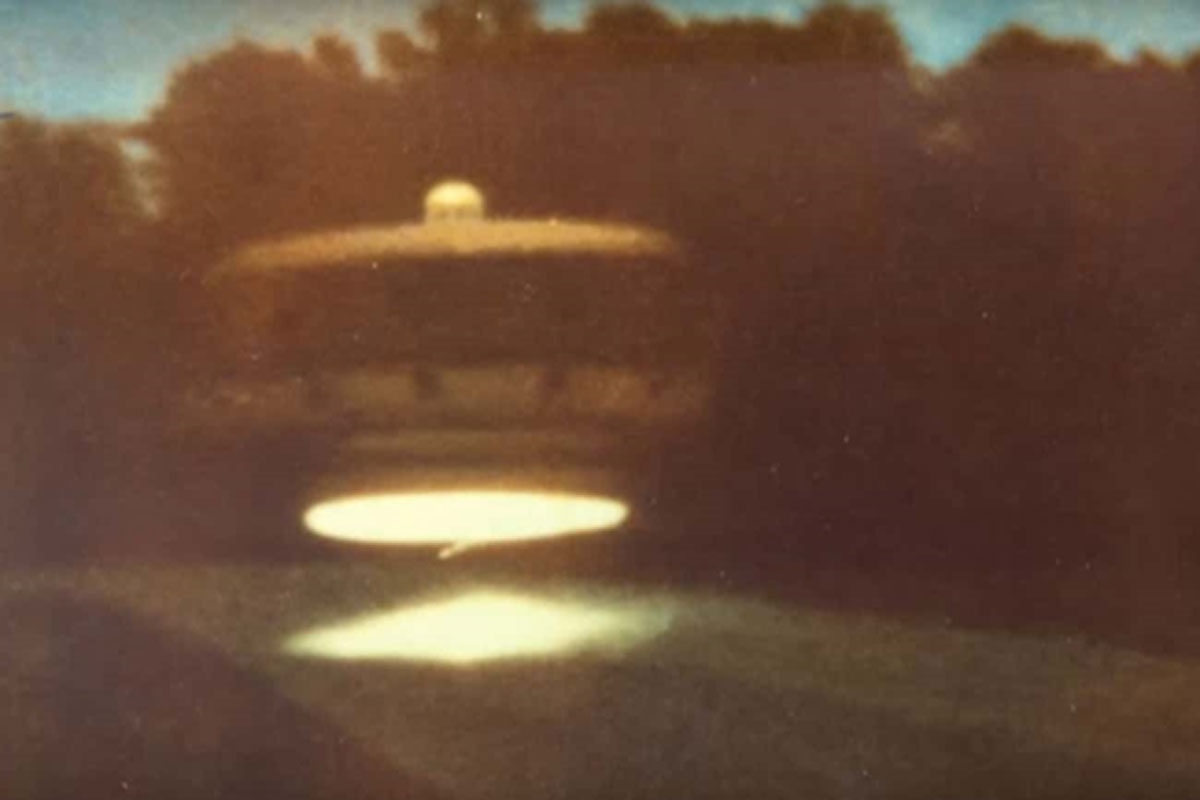 While aliens appeared in all manner of sci-fi and sensationalism in the early 20th century, only after the Roswell incident did the world see a surge of photos that may contain aliens. Photographs of aliens always encounter skepticism, but to uncover the truth of the matter of extra terrestrial life requires people to study this photographic proof of alien life, and determine if the world’s population remains largely unaware. Some of the alien pictures you’re about to see come from people who were supposedly abducted by aliens, while other photos came from whistleblowers telling their alien stories and sharing info on the US government’s alleged involvement with aliens.

These pictures that show extra terrestrials get super freaky, and the corroborating stories behind them get even freakier. But like alien abduction stories, these photos are best taken at face value. Prepare to go down the rabbit hole of a potential vast government conspiracy with these photos that may contain aliens. 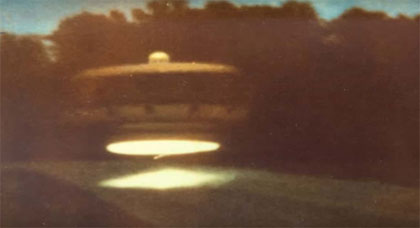 Of all the alien photos in existence, those taken by Ed Walters in Gulf Breeze, Florida in 1987 depict some of the most realistic looking UFOs on camera. Walters, who believed he was targeted by extra terrestrials and Men In Black while working with MUFON (the Mutual UFO Network), managed to take multiple shots with a Polaroid camera.

It’s possible this photo is double exposure, but that’s really hard to accomplish on a Polaroid, so if that’s what’s going on here, kudos to you, Ed.

• • The Alien Crossing The Road 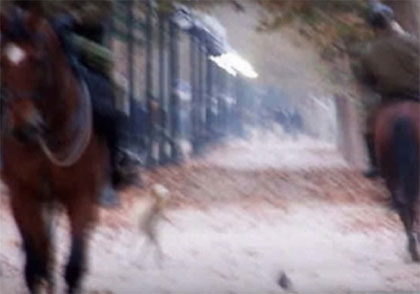 In early 2017, Germán Pereira took a photo of an alien creature crossing the road in the Parque Forest in Santiago, Chile. Supposedly the photo was snapped in front of Bellas Artes. While the photo is blurry, you can see something is crossing the road.

Pereira told the Express, “The fact is that I am very impressed by this image. I attest to the fact that it is not a fraud nor anything similar. For this reason I have made it public.”

• • The Alien Base On The Moon 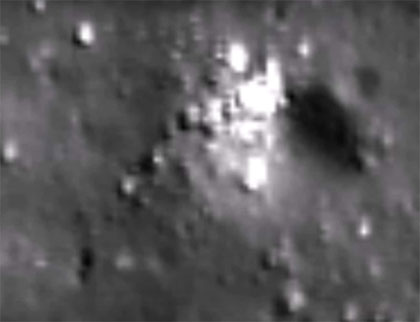 In 2016 a NASA satellite sent back thousands of photos of the moon’s surface and a UFO hunter named Scott C. Waring noticed something fishy: what looked like a bunch of buildings.

Waring believes the “M-shaped” structure on the moon proves that the aliens who built them are “human-like,” and that said structures also act as “a space craft if necessary.” Scott wrote on his blog, ““Here is a great example of a structure on our moon. You can make out the details of its white surface and its sharp 90 degree corners.”

• • The Dulce Base Alien 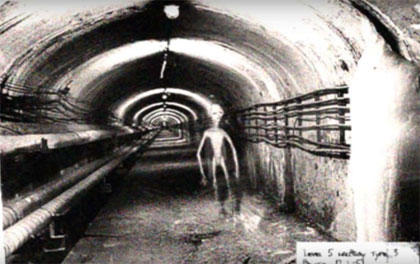 For those unaware, the Dulce Base is one of the most secretive military bases in America. An alleged underground facility located on the Colorado-New Mexico near Dulce, New Mexico, it supposedly houses a myriad of species of extra terrestrials who work next to each other to keep the research facility functioning.

According to Thomas Castello, allegedly a former Dulce base security officer, the photo above shows one of the many aliens he worked with. During his time there, Castello claims he worked alongside reptilians and greys, but why they allowed him to take a photo remains unsolved. 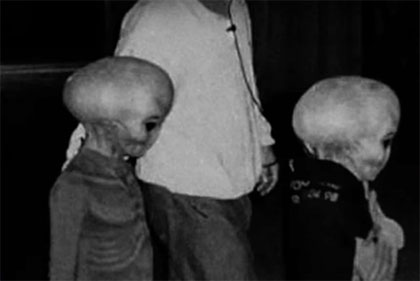 Here’s another photo that allegedly comes from the Dulce Base in New Mexico, where the greys and US military supposedly worked alongside Reptilians in order to perform experiments on the human race. Philip Schneider, an explosive engineer who worked for the US government with high-level security clearance, claims that in 1979 he was working on the base when he came face to face with a grey, and accidentally started an intergalactic war. It’s likely that this photo was taken prior to that incident. 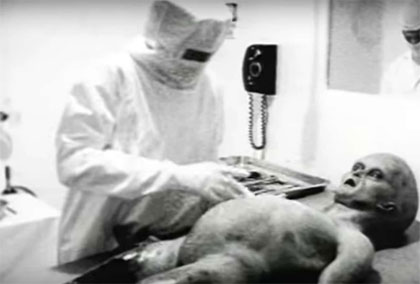 Released in 1995 by Ray Santilli, the footage from Alien Autopsy contained some incredibly harrowing footage of an extra terrestrial recovered from the 1947 UFO crash near Roswell, but was it real? The footage and photos supposedly arrived in Santilli’s hands by an anonymous retired military officer. UFOlogists have combed over the footage and gone back-and-forth about whether or not the footage was faked or real.

According to Santilli, much of the original footage he viewed fell to pieces, forcing him to recreate the scene, which someone supplied him in the early ’90s. He also says that clips of the original autopsy also appear interspersed among the re-staged clips.

• • The Alien Hand Caught In The Mars Rover 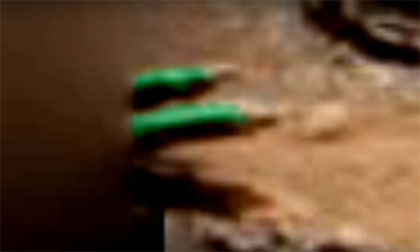 In 2015 footage from Mars rover Curiosity came back to NASA, and while most of the photos showed just big red rocks, one image offered something a bit spookier. The picture in question features what looks to be an alien hand with claw-like fingers extruding from the edge of a frame.

Many UFOlogists believe this to be the real deal, but some skeptics feel like they’re dealing with a simple optical illusion.

• • The Alien Frozen In The Snow 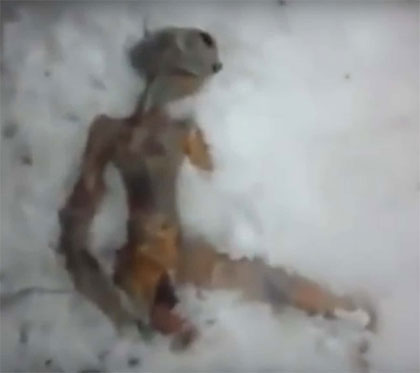 In 2011, a video of what appears to be an alien corpse thrown from a downed UFO started to circulate online. The video, which originated in Russia, follows two men out for a walk outside of Irkutsk, Russia, at the crash’s aftermath. As they investigate the crash site they discover the alien’s mutilated corpse.

Despite skeptics attempting to poke holes in the theory of this alien, there’s a large amount of UFO and unexplained activity in Russia; could this simply be one more piece of strange phenomena? 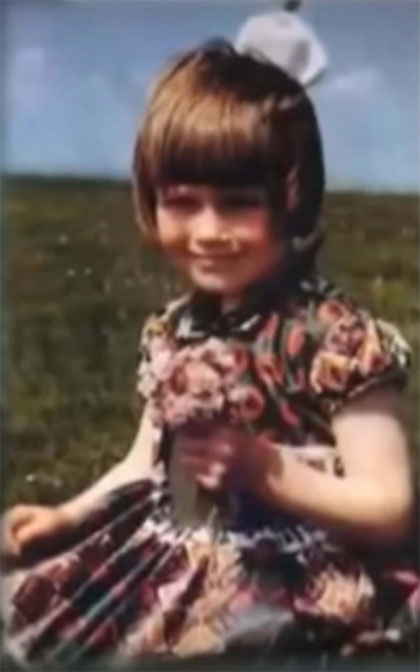 The Soloway Firth Spaceman is one of the most intriguing alien photographs from the 21st century. In 1964 a man named Jim Templeton took a series of photographs of his five-year-old daughter while they were in Burgh Marsh. After he developed the photos he discovered the giant “spaceman” standing behind his daughter.

Is it an extra terrestrial as some people believe? Is it someone from an alternate dimension who popped into our universe to say “hello?” Or is the whole thing one big hoax? 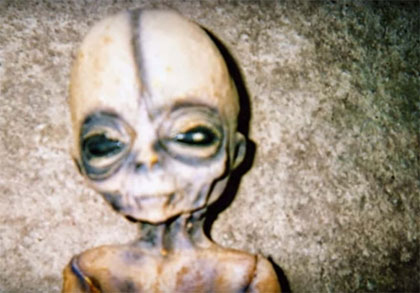 Boyd Bushman was an ex-high-level military employee with an incredibly decorated career. After his time in the military he held senior positions with Lockheed-Martin, and had an all-around really cool life. But before he died in 2014 he began to make the rounds of the paranormal talk circuit and show off pictures of aliens who had allegedly been recovered from Roswell and other sites of UFO crashes.

There are plenty of skeptics who don’t believe Bushman, but his photographs do look very convincing. 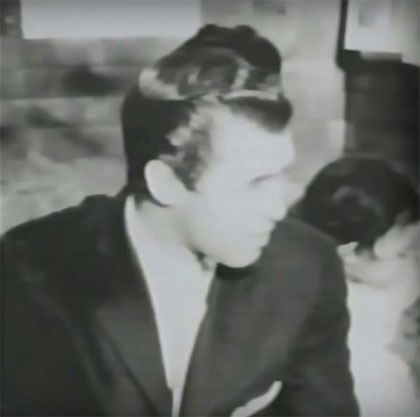 If you’ve never heard about Commander Valiant Thor from Venus then you’re about to head down the rabbit hole into one of the weirdest government conspiracies ever proposed. The story of Thor comes from the book Stranger at the Pentagon, a book by Dr. Frank E. Stranges, which alleges that for three years an alien from Venus was working at the Pentagon and living on government property. Thor was able to use thought transference to speak with people, and he claimed the Bible exists in some form or fashion for every race of life because Jesus was the savior of everyone and everything.

Supposedly, Thor’s career in the government coincided with the Philadelphia experiment, and his funky Venutian science may be why the USS Eldridge was able to disappear, and travel through time and space to the waters off of Virginia.