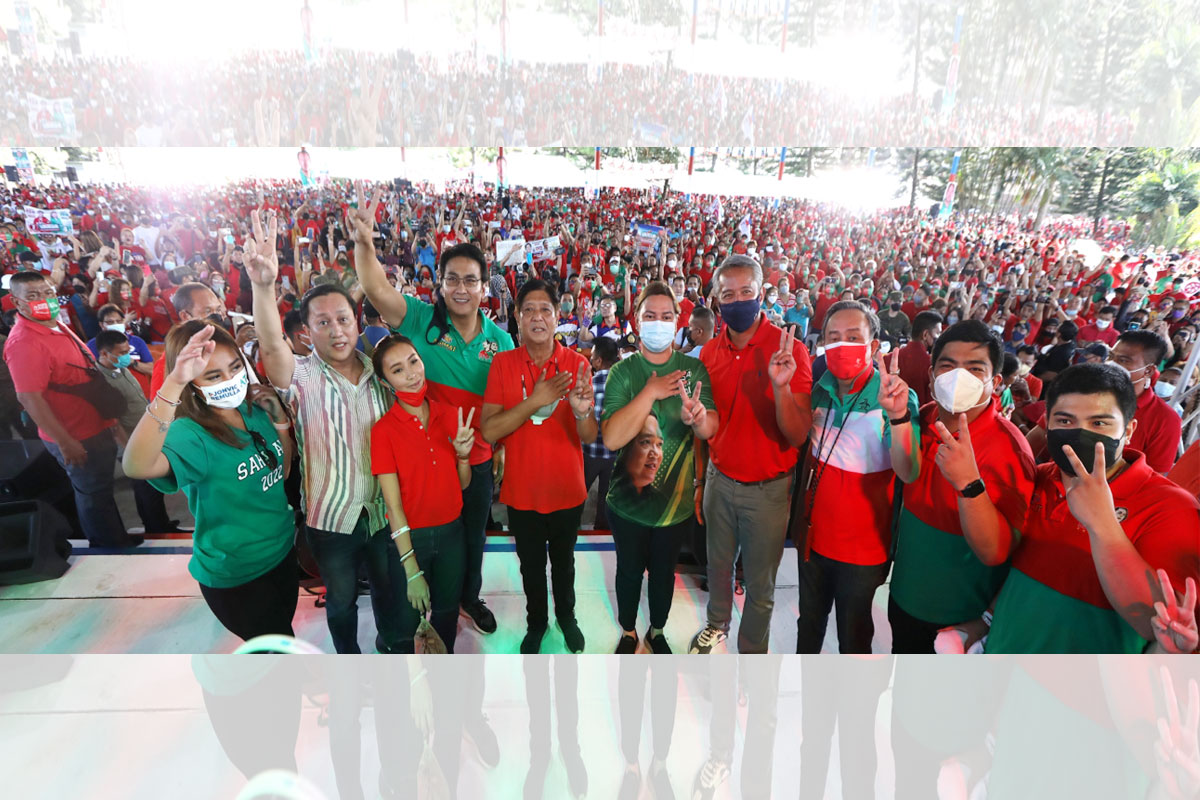 According to the latest data from the Commission on Elections (Comelec) for the May polls, Dasmariñas City has 400,074 voters – out of Cavite’s 2.3 million registered voters.

Duterte expressed gratitude to all local officials who organized Tuesday’s events and thanked the people for taking [the] time to listen to UniTeam’s message of hope, unity, and patriotism.

Remulla said Cavite is solid behind the candidacies of Marcos and Duterte under the UniTeam Alliance.

For his part, Revilla said the BBM-Sara tandem is “assured of a big win in Cavite.”

With Marcos gaining the endorsement of the ruling Partido Demokratiko Pilipino-Lakas ng Bayan (PDP-Laban) under Department of Energy (DOE) Sec. Alfonso Cusi or the wing being supported by President Rodrigo Roa Duterte, Tolentino said the governors and his party-mates will begin a full-blast campaign for Marcos, Duterte, and UniTeam senatorial candidates.

Tolentino revealed that Mayor Duterte studied at the De La Salle University-Dasmariñas for one year, declaring her as the daughter of Cavite.

Big political names are solid behind BBM-Sara. Speaking for the family, former Rep. Gilbert Remulla said most political personalities in the province are supporting the UniTeam ticket.

“Not only the political machinery of Cavite is united but even the citizenry through the numerous parallel groups that have signified support for the UniTeam. Expect a massive landslide victory for BBM-Sara,” Gilbert Remulla, the principal organizer of such parallel groups.

“We have the Revillas, as well as the Tolentinos, the Ferrers, and of course the Remullas. We also have Councilor Kiko Barzaga of Dasmariñas City. We have formidable political and grassroots support,” Remulla said.

His brother Jonvic is governor of the province, while another brother, House Senior Deputy Majority Leader Jesus Crispin “Boying” Remulla, is a congressman representing the 7th district.

Gilbert Remulla said they are counting on the support of majority of the mayors of 23 towns and several cities, including Bacoor, Cavite, Imus, General Trias, Trece Martires, and Tagaytay.

The Remulla patriarch, the late Gov. Johnny Remulla, was an ally of the late President Ferdinand E. Marcos Sr.

The UniTeam led by Marcos held a mini caravan from Bgy. San Juan to Paliparan.

At 3:00 p.m. Tuesday, an assembly comprising of Cavite’s community leaders was held at Sigtuna Covered Court in front of TICC.