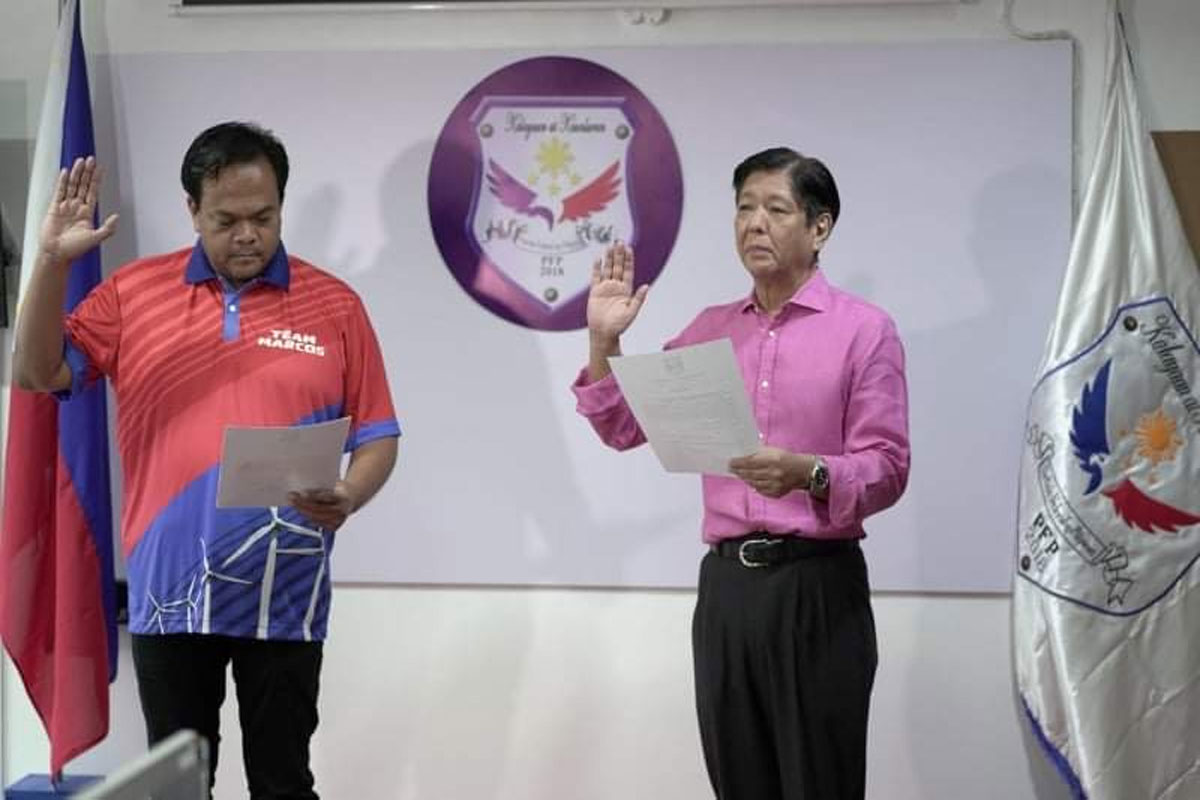 With ‘convoy of political parties, sectoral movements and youth groups’

AFTER joining and assuming the chairmanship of the Partido Federal ng Pilipinas (PFP), former Sen. Ferdinand “Bongbong” Marcos Jr. on Tuesday declared his presidential bid, vowing to bring back a unifying leadership for Filipinos who are battling the coronavirus disease-19 (COVID-19) pandemic.

“I am announcing here today (Tuesday) my intention to run for the Presidency of the Philippines in the coming May 2022 elections. I will bring that form of unifying leadership back to our country. Join me in this noblest of causes and we will succeed. Sama-sama tayong babangon muli,” Marcos declared.

Delivering his impassioned speech in mixed English-Pilipino, Marcos said: “As I speak to you today (Tuesday), our beloved Philippines faces one of the greatest tests in history. The global pandemic destroyed the lives of people… of communities. And if we have learned anything in this time of COVID pandemic, it is that each of us, no matter our station in life, needs the help of our fellow Filipinos.”

“We must face this challenge as one… as one country… as one people. Together we must work towards a shared vision for our country through COVID and beyond COVID… to find a way through this crisis with a common goal, a vision to guide us and to lead us,” Marcos continued.

Dozens of political parties, sectoral movements and youth groups have expressed unwavering support for the presidential bid of Marcos after announcing his candidacy for the highest elective position.

Before his official announcement, Marcos took his oath as member of the PFP and assumed the chairmanship of the three-year old political party, which the former senator said he admired for its commitment to public service above politics.

He added that he accepted the endorsement of the PFP and its fraternal parties and the multi-sectoral groups to run as their standard-bearer in the 2022 election after having completed the process of consultations with his grassroots leaders.

Lawyer Victor Rodriguez, PFP’s executive vice president and general campaign manager for the 2022 elections, said that after the most-awaited Marcos’ declaration, more endorsement and expression of support for his presidential bid have poured in from other political parties and sectoral groups… from the Solid North in varied age groups down to the United Visayans and the Solid South.”

Aside from the PFP that serves as the ‘lead car’ in a convoy of supporters that will give Marcos the needed political vigor in his presidential run, Rodriguez identified some of the voting blocs and fraternal organizations as the Kilusang Bagong Lipunan, Partido Lakas ng Manggagawang Pilipino, Labor Party of the Philippines, Partido Federal Youth, Solid Bongbong for President Worldwide Movement, Police Hotline Movement, Inc., Maunlad na Pilipinas Movement and the countless of Youth Supporters and Senior Citizens organizations worldwide.

“BBM’s support base extends now to the grassroots level in the Visayas, where his mother’s family holds strong influence with the local politicians and Mindanao, where the PFP maintains a stronghold because its party president, Reynaldo S. Tamayo, Jr., is the incumbent governor of South Cotabato,” Rodriguez said.

He quipped: “Though the strength of the Marcoses originates in the Ilocandia provinces where his father had invested heavily in local politics by introducing enormous developments in the region and developing rapport with the local leaders.”

Marcos added that because the coronavirus pandemic has changed the campaign landscape for the candidates, the BBM camp is more confident that his presidential viability will be magnified through various platforms of the social media by his youth groups who form part of most of the country’s internet savvy.