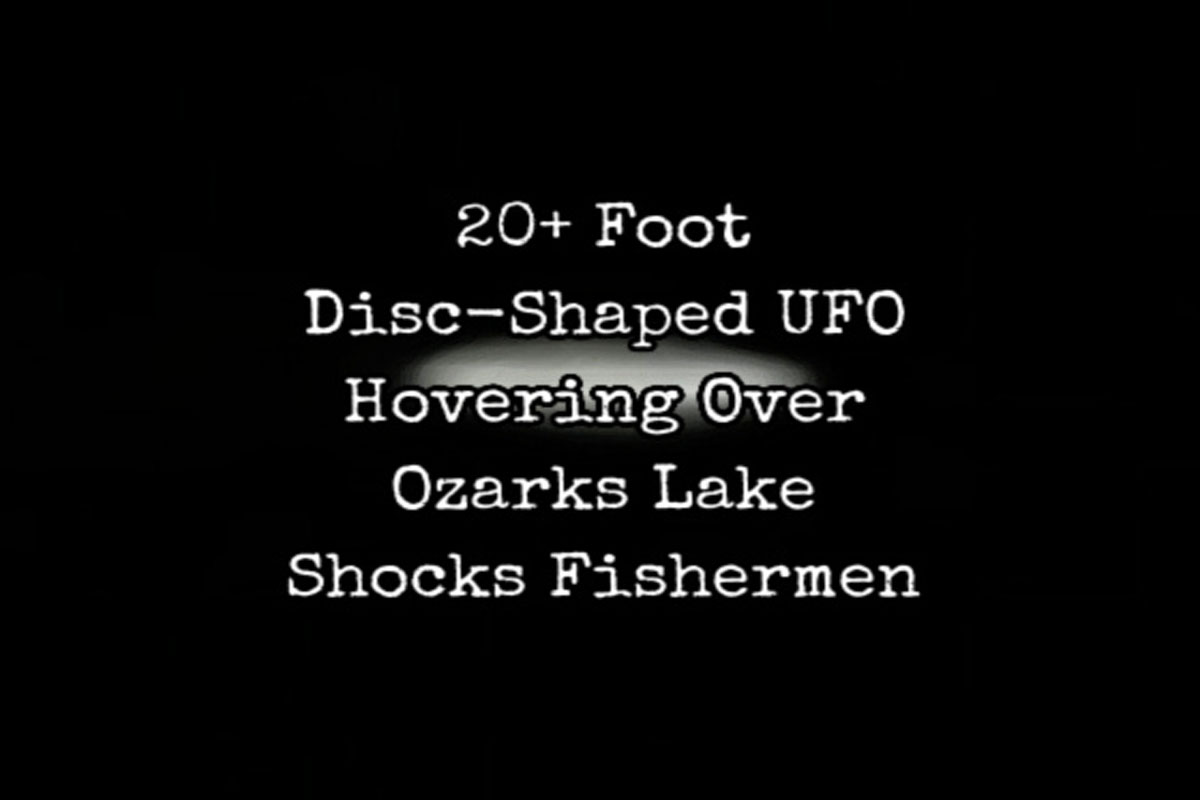 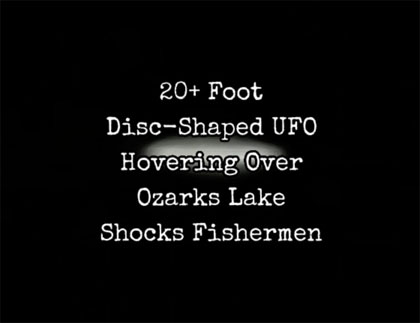 Two fisherman, in their boat on Norfork Lake in the Arkansas Ozarks, heard splashing sounds. They then noticed a 20+ foot disc craft hovering over the surface across the lake.

“This incident happened sometime in the early 80s. My dad told me the story the next day, and only told it once. He’d never discuss it again.

My dad was an avid fisherman. He “lived to fish,” and once he had the rod and reel in his hand, he’d fish until he was worn-out, a storm came in, etc. We had several locations on the different lakes here in the Ozarks that we went to on the weekends. Wonderful memories, to say the least. Night fishing was a lot of fun because there usually was no one else out there fishing except the “truly hardcore.” like my dad.

On this particular planned night-fishing expedition, I couldn’t go because of work. Dad contacted one of his other fishing buddies and he was more than eager to go for a long night of bass fishing.

This particular fishing buddy, I’ll call him “Jim,” was about as fanatical about fishing as my dad. They planned to go to the upper end of Norfork Lake on the Missouri/Arkansas border where we had a “honey hole” that almost always produced big bass. At that time, there were no houses along the lake or in that area, so it was truly like you were “out in the boonies.”

Dad and Jim unloaded the bass boat at a ramp on the Arkansas side and sped up to the “honey hole” area. It was just turning dark when they arrived. Fishing was good that evening for both Dad and Jim. There was no moon that night, no wind, no fog, and the bass were hungry. Since it was during the week, no one else was on the lake where they were, and no other boats passed by the entire time they were there.

Everything went well until about 2 AM. Both Dad and Jim suddenly heard what sounded like a soft “splashing noise” over across the lake near the opposite shore about 250 yards away. Dad reached down and picked up his powerful marine spotlight and shined it towards the source of the sound. Both Dad and Jim were both bewildered at what they saw over there.

A grayish object was over towards the opposite shore, and about 50 yards out from the shore. The object was smooth with no lights, appeared to be oblong-shaped, and estimated to be about 20+ feet long. The height above water of the object in the center of it was about 3 feet. Both ends tended to taper down from the center. All edges were rounded. No writing or any identifying marks on it. They couldn’t get a good estimate of its width. No signs of life around it. Whatever this was appeared to be bigger and longer than Dad’s bass boat. A soft ‘splashing noise’ emanated from it, yet it was not moving at all. The water around it appeared to be calm.

Dad told Jim, “We may have a boat turned over. Somebody may need help.” Jim got on the big motor and started it up while Dad kept the spotlight on the object for a navigation reference. They were just a few yards away from it, when Dad looked back towards Jim for a few seconds to tell him to, “Throttle back now, we’re almost there.” When they looked forward towards the object again, they saw nothing.

Jim shut down the engine as Dad shined the spotlight all over the area. Nothing was there but the calm dark lake. The object had completely disappeared. It was also very quiet. Both Dad and Jim had seen it from the opposite side of the lake and watched it as they approached it, but in seconds it had just vanished. They looked around for a few more moments, and then Jim said, “Doc, I haven’t felt this since our base camp was about to be overrun by the NVA in ‘Nam. We gotta get outta here now!” My Dad apparently was terrified as well, because with that, it just took a few seconds for him to restart the engine and slam the throttle down on his big Mercury and speed away to the loading ramp a couple miles to the south.

Dad told me the story the next morning while we were cleaning fish. He simply told it and would say no more. Same for Jim. In all the years since then, he’d refuse to talk about it. Both Dad and Jim were two men who were about as “practical” as you could get, and neither were prone to believe in “the booger man” or believe other people’s “wild stories.”

In any case, they saw something, and it ended-up terrifying both of them. As a side note, I don’t believe my Dad ever returned back to the “honey hole” again.” OM

He Teaches Police “Witching” To Find Corpses. Experts Are Alarmed