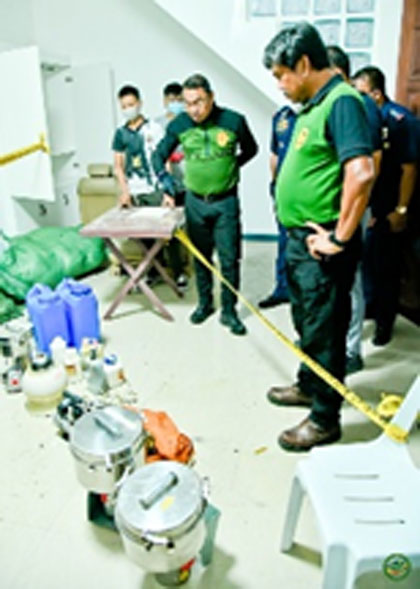 AN estimated 400 kilograms of high-grade shabu worth P2.72 billion were confiscated Friday in a series of anti-narcotics operation in Pangasinan and La Union provinces spearheaded by agents of the Philippine Drug Enforcement Agency (PDEA), the biggest scored so far by the Marcos administration which has vowed a sustained war on illegal drug trafficking and abuse.

The recovered drugs, which were packed and labeled as Chinese tea products, were believed to be being distributed by the syndicate to their contacts in Metro Manila, Calabarzon, Central Luzon and Ilocos-Pangasinan regions.

According to PDEA Deputy Director General for Operations, retired Police General Gregorio R. Pimentel, they have been long hot on the trail of the suspects who are believed to be part of a Chinese-led ring involved in large-scale importation and distribution of shabu in the country.

The arrested Chinese national admitted his involvement in illegal drug distribution in the country during initial questioning. Other members of the syndicate are still being hunted as of press time, said the PDEA.

Villaneuva said that first to be arrested during a buy-bust operation at around 11:30 a.m. Friday inside a house in Turquoise Street in Sunshine Village, Pozorrubio in Pangasinan were Ke Wujia alias “James Dagale Galopo,” a 49-year-old Chinese national from San Vicente Sur in Agoo, La Union; and his Filipino companions Johnbert Yagong, 22; Jenson Rey Yago, 29; and Ritchell Repuesto, 28.

Yagong is from San Agustin Norte in Agoo while Yago and Repuesto are both from San Carlos City in Negros Occidental.

Villanueva said that recovered from the suspects were 360 kilos of the so-called “poor man’s cocaine” worth P2.448 billion and the buy-bust money topped by several marked bills. Also recovered during the operation were assorted identification cards and financial documents of the Chinese national.

A follow-up operation in Ilang-Ilang St. in Bgy. Poro in San Fernando City in La Union 12:45 p.m. of the same day resulted in the arrest of 38-year-old Romel Leyese of Bagong Silangan, Quezon City and his companion, an 18-year-old male from San Carlos City.

Confiscated from the duo were 40 kilograms of shabu worth P272 million, the buy-bust money, several mobile phones, identification cards and financial documents.

All suspects are now facing non-bailable charges for the sale and possession of prohibited drugs under Republic Act (RA) No. 9165 or the Comprehensive Dangerous Drugs Act of 2002.

Ruiz said the participating units were from the BOC Intelligence Group, led by officer-in-charge and customs intelligence service director Jeoffrey Tacio, who was a veteran PDEA officer before joining Ruiz at the BOC.

Article II, Section 11 of RA 9165 imposes a penalty of life sentence to death (no bail) against anyone found in possession of 50 grams or more of shabu.

Ruiz, a bemedaled PDEA regional director and law enforcer before joining the BOC in 2017, has made it clear upon his formal assumption last July 25 that he would not tolerate any entry of illegal drugs in the country, stressing it is one of the clear marching orders he received from President Ferdinand Marcos Jr. By ALFRED DALIZON & PAUL GUTIERREZ

2 held for guns, ammo in Batangas