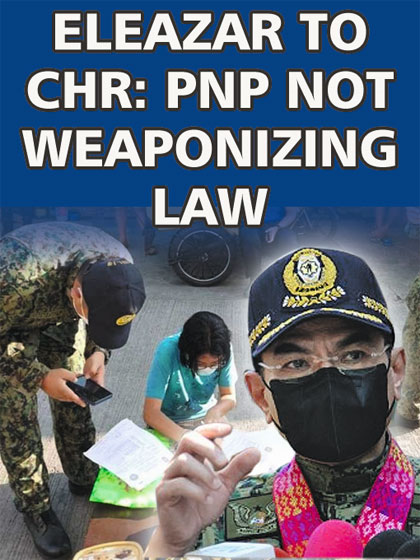 THE Philippine National Police (PNP) leadership has assured the Commission on Human Rights (CHR) it is not into the practice of weaponizing the law as they have been sworn to always uphold their duty to serve and protect the people.

“I would like to assure the CHR that the men and women of the police organization do not weaponize the law. It is not the PNP’s way to use the law to attack any citizen whom we are sworn to protect and serve. Our role is only to enforce what the law provides,” said PNP chief, General Guillermo Lorenzo T. Eleazar.

The PNP chief issued the statement in the wake of the CHR’s move to call for an investigation into the arrest of Anakbayan Naga City chairperson Sasah Sta. Rosa early this month for illegal possession of firearms and explosives.

After the accused was charged with violation of Republic Act 10591 or the Comprehensive Firearms and Ammunition Regulations Act of 2013 and RA 9516 or illegal possession of explosives, the CHR sought a probe into what it claimed was the weaponization of the law against State dissenters.

According to Gen. Eleazar, “we have, in law, what we call the presumption of regularity in the performance of official duties to enable us to effectively dispense our functions. This can only be overturned by clear and convincing proof to the contrary dahil kung hindi eh sigurado akong binaha na tayo noon pa ng samu’t-saring nuisance cases mula sa mga akusadong gusto lang makalusot sa kanilang krimen.”

“But if there are claims of police irregularity and they feel they have evidence to support that allegation, it is well within their rights to file a complaint. We are open to any investigation and whatever the outcome, we will accept and abide,” he added.

Gen. Eleazar said that he is looking forward to the finalization of protocols by the Supreme Court on the use of body-worn cameras in police operations, particularly in the service of arrest or search warrants.

Over 30,000 Body-Worn Cameras or BWCs set to be used by the police will not only ensure transparency in their conduct of anti-criminality raids, searches and other operations but also help protect members of the force from counter-charges and other harassment suits, the PNP chief emphasized.

The BWCs will be used by key PNP units and stations nationwide in their conduct of anti-criminality patrols and operations such as during the service of warrants of arrest and search warrants for illegal possession of drugs and firearms and explosives.

The PNP chief said that so far, a total of 2,696 body cams have already been distributed to different police stations and units in key cities across the country.

“We need additional 32,136 units to include all other support units,” he said while adding that the additional body cameras would complete the PNP’s requirement of 34,832 units.

“But in the meantime that there is still no budget for this additional procurement, we will make use of what we have and hopefully, this would convince our lawmakers to fund additional body cameras for the PNP in the spirit of transparency and effective law enforcement,” Gen. Eleazar explained.

The top cop said he is very much confident that the use of the body cams will finally happen under his leadership.

According to Gen. Eleazar, he would initially want these body cams used by policemen in the service of court-issued search warrants such as warrants for violation of Republic Act 9165 or the Comprehensive Dangerous Drugs Act of 2002 and RA 10591 or the Comprehensive Firearms and Ammunition Regulations Act of 2013 to clear up allegations of irregularities in such operations.

“This will serve as protection for both parties, the police operatives and the persons who are subjects of the warrant, “ he emphasized.

However, he said that it would be natural for undercover police officers not to use the bulky BWCs since the presence of the bulky gadget strap in their shirts would naturally blow their cover specifically when dealing with drug dealers.

“These body cameras will ensure transparency in police operations and, hopefully, put a stop to allegations that policemen are engaged in planting of evidence or even the summary execution of suspects,” he said.

Gen. Eleazar bared he has been in touch with the Supreme Court regarding the use of body cameras in the service of search and arrest warrants. A meeting was held last month between the police and the High Tribunal to discuss other matters as well, he said.

The PNP chief added the police force is still awaiting the guidance and the protocols of the High Tribunal in using body cameras so that privacy concerns and other legal repercussions would be avoided.