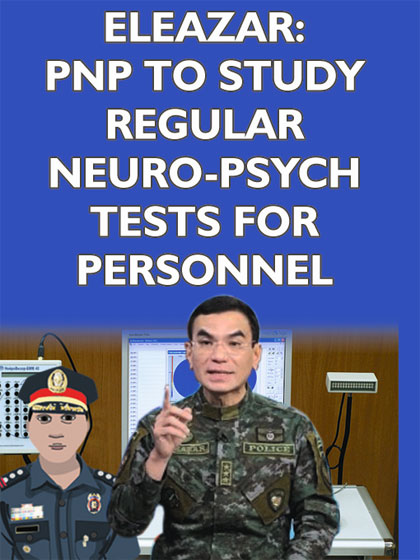 The recommendations arose from a gruesome incident involving Police Master Sergeant Hensie Zinampan of the Police Security and Protection Group who was caught on video shooting his 52-year old neighbor Lilybeth Valdez in Barangay Greater Fairview, Quezon City to death.

The suspect is already in police custody and slapped with criminal and administrative charges.

Calls for neuro-psychiatric assessment of PNP personnel were amplified because of a similar incident which happened in December, last year involving former policeman Jonel Nuezca who shot and killed his neighbors Sonia and Frank Anthony Gregorio in Paniqui, Tarlac.

“The PNP will study this recommendation of subjecting our personnel to regular psychiatric assessments or tests. Personally, I acknowledge that there is really a need to prioritize this given the nature of our duty,” Gen. Eleazar said.

However, the PNP chief admitted that the healthcare services of the organization still has limitations. Psychiatrists from the PNP Health Service are the ones subjecting members of the police force—those who are applying for promotion or those rookie cops to a Neuro-Psychiatric test to determine if they are mentally fit for their job.

“Until then, our police commanders who observe signs of emotional imbalance or mental disorder on their men should immediately refer them for neuro-psychiatric evaluation, through their respective health units. This way we can help them cope and heal and avoid being a danger to themselves and others,” he added.

Gen. Eleazar assured that the PNP will explore possible partnerships with groups, institutions and facilities advocating the importance of mental health.

The PNP chief said that aside from their physical health, the police personnel’s mental health should also be well taken care of.

Formal criminal and administrative charges have been filed against Zinampan.

He was charged with murder before the Q.C. Prosecutor’s Office and an administrative offense for grave misconduct, both offenses punishable by dismissal from the police force.

According to the PNP chief, the accused opted not to submit his counter-affidavit, thus expediting the conduct of his pre-charge investigation prior to his dismissal proceedings.

“In the case of the administrative investigation, basically the pre-charge investigation has been concluded the other day dahil nag-waive na magsubmit ng counter-affidavit itong suspect natin so formally he was charged already for grave misconduct,” Gen. Eleazar.

The PNP chief said he was informed by PNP Internal Affairs Service head, lawyer Alfegar Triambulo that the investigation for Zinampan’s administrative case may take at least three weeks to one month.

The PNP chief and Q.C. Police District director, Brigadier Gen. Antonio C. Yarra visited the wake of Valdez to condole with her grieving family,relatives and friends and to assure them that justice will be served on the victim.

The family of the victim had expressed satisfaction over the way the QCPD had handled the investigation of the case and it has ensured that the accused won’t be given any VIP treatment.

Gen. Eleazar vowed to ensure the speedy dismissal from service of the PSPG member who was described as a ‘good and hardworking cop’ except when he’s drunk. The PSPG leadership also said that majority of their officers and men are highly-dedicated policemen who have been true to their oath to ‘serve and protect’ the public.

The PNP chief also said he will personally monitor the legal offensive against Zinampan who is now under the custody of the QCPD. He will be transferred to the Q.C. Jail as soon as there is a court order.

Based on an initial QCPD investigation, MSgt. Zinampan figured in a scuffle with the son of 52-year old victim Lilybeth Valdez on May 1. The daughter of the victim told the police investigators that the policeman threatened to harm them shortly after the incident.

Two Mondays ago, an apparently drunk Zinampan went to the area where he confronted the victim. Based on the video that went viral on social media, the policeman was already holding his gun before he approached the victim.

He then grabbed the victim and shot her at close range. Responding QCPD operatives arrested and disarmed Zinampan.