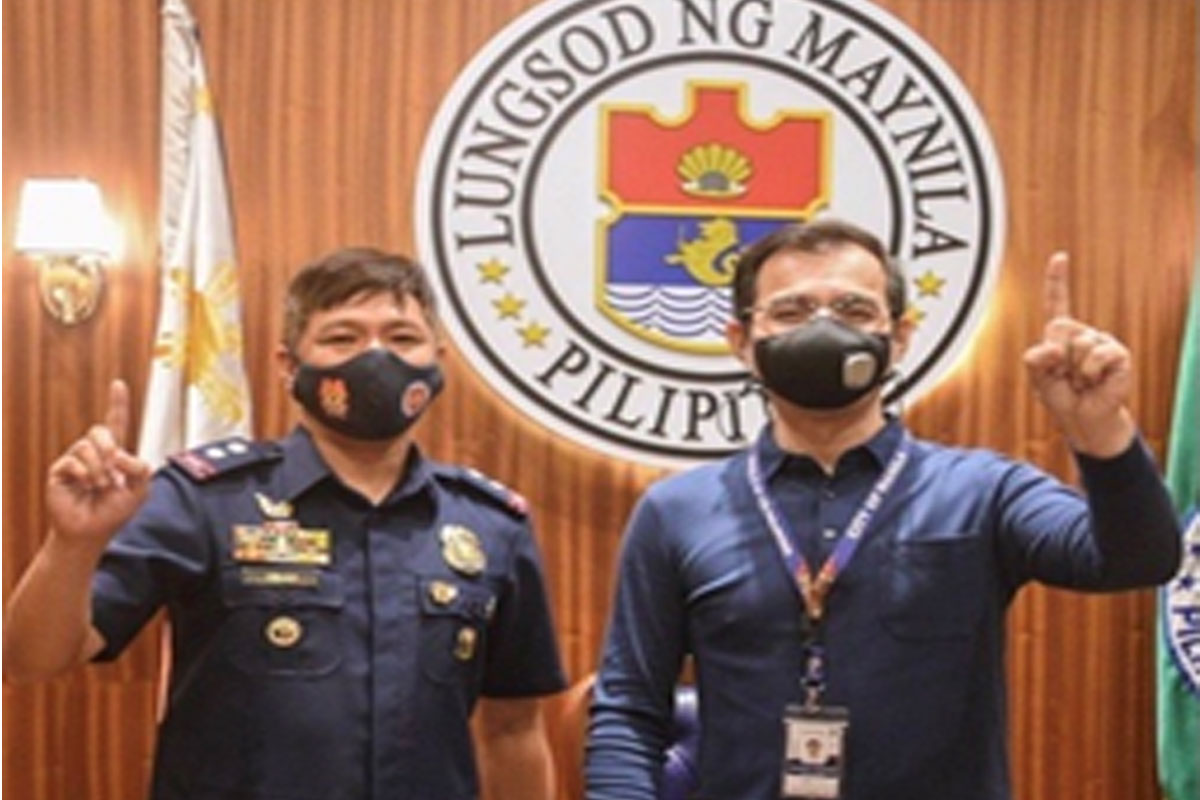 Mayor Isko Moreno receives a report from Col. Jhun Ibay after the arrest of the lady motorist who hurt an enforcer from the MTPB. Photo by JERRY S. TAN
Metro,

Do not assault traffic enforcers: Isko appeals to Manila motorists

AN appeal was made by Mayor Isko Moreno to all motorists traversing the roads of Manila to follow traffic regulations and not to assault the traffic enforcers who are just performing their duties.

Moreno also lauded traffic enforcer Marcos Anzures Jr., 35, of the Manila Traffic and Parking Bureau (MTPB) under Director Dennis Viaje, for exercising maximum tolerance amid the beating he took from a lady motorist who was accosted for at least two traffic violations.

Ibay, whose team processed Altamirano, said that based on the complaint lodged by Anzures, the incident took place along Osmeña Highway corner San Andres Street in Malate, Manila at 8:05 a.m. on May 27, 2021.

Anzures stated that he and colleague enforcer Rowell Echalar were manning the traffic at the said area when they spotted the suspect, aboard a white Toyota Fortuner with plate number NAX-2723, beat the red light.

This prompted them to signal the driver to stop the car so that they can issue a citation. Instead of stopping, however, Altamirano continued driving.

The two traffic enforcers gave chase until she was cornered along Osmeña Highway corner Estrada Street in Malate, Manila.

The suspect was instructed by the traffic enforcers to follow them to the impounding area but she refused. Instead, she alighted from her vehicle and assaulted Anzures.

A viral video of what happened, taken by the MTPB, showed that Anzures was punched, collared and slapped by the lady suspect while yelling and demanding for her OR/CR to be returned to her, wailing that the car was not hers. All along, Anzures just stood still while asking the suspect to stop and holding on to the said OR/CR.

The suspect then locked herself inside the car and refused to even open the window, so that the MPTB sought assistance from Ibay who ordered that the vehicle be towed even with the suspect still inside.

The car was brought to the Manila City Hall where Ibay directed a lady cop to talk some sense to the suspect who agreed to finally get out. She was placed under arrest by Sonia Labog also of the MPTB.

Ibay said charges for violation of Section 19 of RA 4136, Article 148 (Direct Assault) and Art. 151 (Resistance and Disobedience to a Person in Authority of the Agent of Such Person) of the Revised Penal Code was filed against the suspect.

Meanwhile, Viaje said the charges against Altamirano will be pursued to the end, to serve her a lesson and send a clear message to the public that they will not allow their personnel to be unduly harmed while regularly performing their duties.

Viaje ordered Anzures to undergo a medical checkup and treatment in one of the hospitals being run by the city government.

Meanwhile, the city of Manila administered COVID-19 vaccines to about 700 athletes, coaches and other delegates to the Tokyo Olympics and SEA Games.

It was learned that the vaccinating teams of Pangan gave Sinovac to the said individuals at a designated hotel in Manila as a commitment of the city to the Philippine Sports Commission. The athletes are set to leave in November.