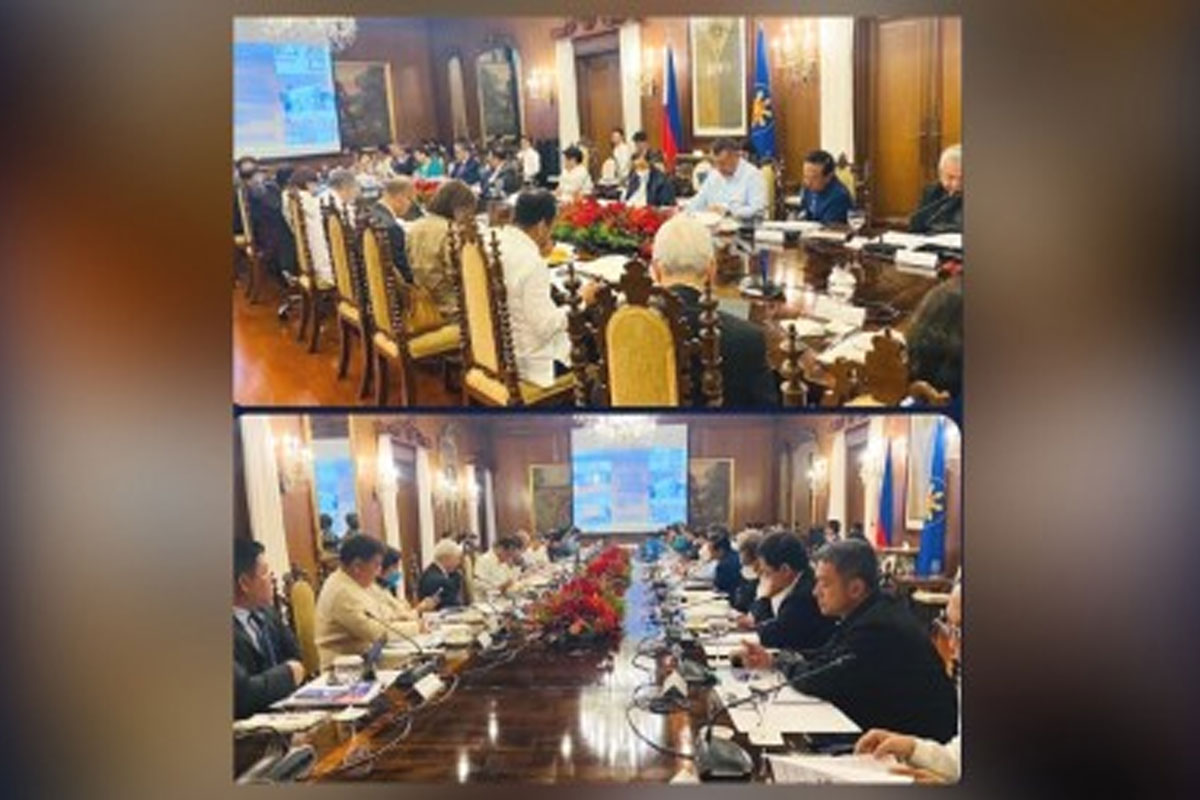 PRESENTATION OF ACCOMPLISHMENTS — President Ferdinand R. Marcos Jr. presides over the 13th Cabinet meeting at the Malacañan Palace’s State Dining Room on Tuesday (Dec. 20, 2022). At least 11 government agencies presented their accomplishments for 2022 and key priorities and plans for 2023 during the meeting. (Photo from PBBM’s official Facebook page)
Nation,

MALACANANG on Tuesday said President Ferdinand R. Marcos Jr. has been briefed about the key accomplishments of at least 11 government agencies during the 13th Cabinet meeting.

In a meeting held at Malacañan Palace’s State Dining Room on Tuesday morning, around 11 Cabinet members presented the accomplishments of their respective agencies, said Daphne Oseña-Paez, the newly-designated “Malacañang press briefer”, in a media interview.

The programs that will be implemented by the 11 government agencies in 2023 were also discussed, Oseña-Paez said.

“In the 13th Cabinet meeting, the Secretaries presented to President Ferdinand R. Marcos Jr. the key accomplishments of their respective agencies from July to December and their programs for 2023,” she said in a Palace press briefing.

“Sa loob ng anim na buwan, nakita na marami nang nagawa ang administrasyon at malawak pa ang mga programa na magpapabuti sa ekonomiya at sa buhay ng mga Pilipino (In just a span of six months, we are able to see the accomplishments of the administration and there will be several programs that will be implemented to revitalize the economy and improve the Filipinos’ lives),” Oseña-Paez added.

Oseña-Paez said the 13th Cabinet meeting will be the last meeting for this year.

She said the next Cabinet meeting will be held in January 2023 to allow the other members of the Cabinet to present their key accomplishments and plans for next year.

“All the departments are working together to achieve the eight-point socio-economic agenda of this administration,” she said.

Marcos, during the Cabinet meeting, expressed elation over the accomplishments of different departments for the second half of 2022, said Undersecretary Cheloy Garafil, officer-in-charge of the Office of the Press Secretary (OPS), in a statement.

“I think we have managed that and I’m very happy that we were able to do it,” said Marcos, as quoted by the OPS, in a toast during a luncheon he hosted for Cabinet members.

Marcos, however, acknowledged that much remains to be done.

Marcos, Garafil said, asked his Cabinet to “take full advantage of the Christmas holidays, get some rest and prepare again to do battle in public service” after the Yuletide season.

“So with that, I suppose all that is left is to toast you and toast to all a Merry, Merry Christmas and a Happy New Year,” he said. Philippine News Agency