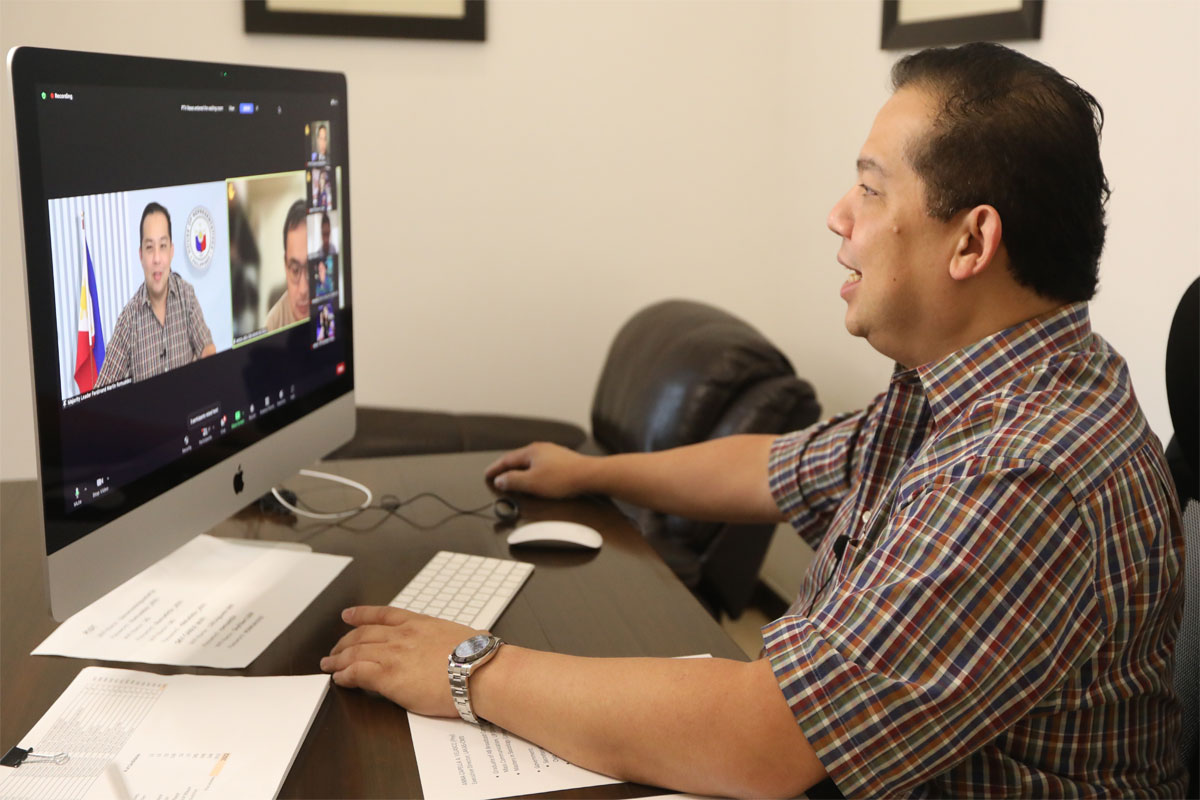 Lakas-CMD Party President and House Majority Leader Rep. Martin Romualdez answers questions from media during a press conference via Zoom at the Lakas-CMD Headquarters in Manila regarding Davao City Mayor Sara Duterte’s joining the Lakas- Christian Muslim Democrats (LAKAS- CMD) Party last Thursday at the Revilla Farm in Silang, Cavite.Romualdez said Sara had a proven track record with excellent credentials and will be a promising leader and a tremendous asset to the Lakas-CMD. Photo by VER NOVENO
Nation,

HOUSE Majority Leader and Leyte Rep. Martin G. Romualdez on Friday appealed to supporters of Davao City Mayor Sara Duterte for patience and understanding, saying the national position she will be running for will most likely be known this weekend.

“Yesterday (Thursday), she was formally admitted as member of Lakas-CMD. The position that she will run for will be known most likely within this weekend. You will be among the first who will hear about it. A bit of patience as we make preparations and consultations with Mayor Inday and the party leadership,” Romualdez, president of the Lakas-Christian Muslim Democrats (CMD), told House reporters in a press conference.

Romualdez also said that Lakas-CMD will give Duterte a very significant position in the party leadership. “We are looking right now kung anong position.”

“Lakas is very honored with our new member. She will bring so much vitality and so much vigor to the Lakas-CMD party, its leadership and more importantly for nation building that the Philippines needs. We have now a potential great national leader. We look forward to working with her,” Romualdez said.

“We are very glad and very happy and honored that Mayor Inday Sara has finally agreed and accepted our standing, long standing invitation to join Lakas-CMD. This has been extended as early as 2018. We have an alliance and active cooperation since then. We’re glad that last night (Thursday), she finally accepted and I would like to tell you that she joined Lakas-CMD for a possible run in the national arena,” Romualdez said.

Hours after resigning as chairperson and member of the regional party Hugpong ng Pagbabago (HNP), Duterte, who has been topping various presidential surveys, took her oath before Romualdez as new Lakas-CMD member early evening Thursday.

Duterte has until Monday to possibly substitute either for president or vice president under Lakas-CMD. She withdrew her certificate of candidacy (COC) for reelection last Tuesday.

Velasco graduated with an AB Broadcast Communication degree from the Institute of Mass Communication in the University of the Philippines (UP), Diliman. She took up her Masters in Sociology (under thesis) at the Asian Social Institute.

Uy earned his BS Entrepreneurial Management at the University of Asia and Pacific.

“I’m hoping for that (no conflict). That they can work together, discussions between two have been along those lines. We’re thinking positive about this. We’re in middle of getting two excellent leaders that can serve our country,” Romualdez, first cousin of Marcos, said.

“If the two will be running in tandem, I’d rather leave it up to them to make a final decision. We, as a party of Mayor Inday Sara, we will be very supportive of her decision,” Romualdez, known for his consensus-building leadership, said.

“For time being I know there is an engagement between the two (Marcos-Duterte). As we know, they saw each other and I’m sure they talked even not necessary face-to-face and I know they talk from time to time. Baka even by Zoom,” Romualdez added.