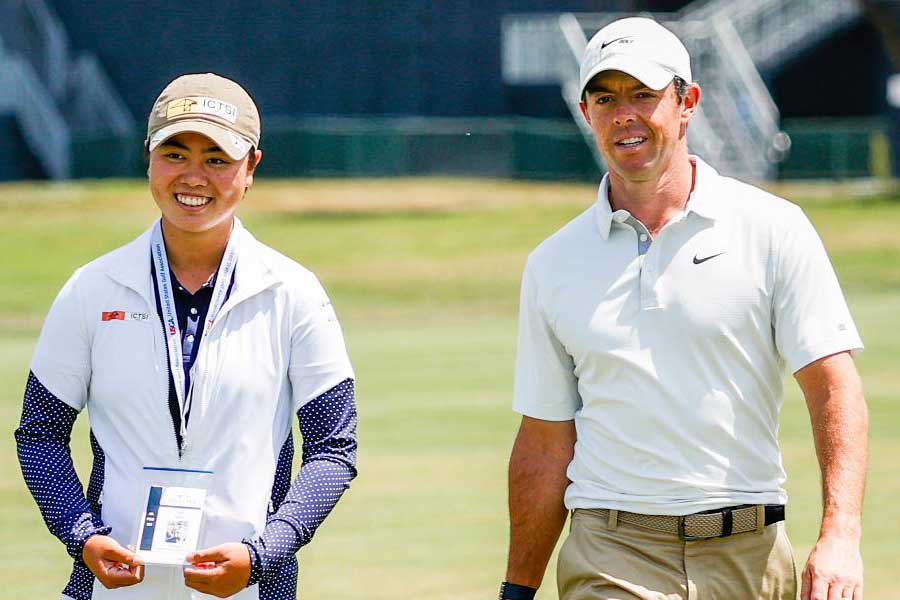 Saso, who modeled her swing after that of four-time major winner McIlroy, captured her first major title on June 6 at the Olympic Club in San Francisco.

Saso said meeting McIlroy and walking with him for three holes made her more nervous than making the putt to defeat Japan’s Nasa Hataoka in a sudden-death playoff for the US Women’s Open crown.

“Meeting Rory, yeah, I was more nervous. I didn’t know how to say hi,” Saso said. “But he was so nice. He was so kind. He was so open. When I asked him a question, he was so honest. I hope I can ask him more advice.”

McIlroy, who had heard about Saso’s similar swing, made an inspiring post on Instagram before her final round at the US Women’s Open.

“Great playing the last few days @yukasaso_official. Go finish it out today and get that (trophy emoji),” McIlroy wrote.

After her victory, Saso said, “Rory mentioned me on Instagram and said, ‘Get that trophy.’ And I did. So thank you, Rory.”

McIlroy tweeted his congratulations, saying, “Everyone is going to be watching Yuka Saso swing videos on YouTube now.”

Saso had imagined what it would be like to meet McIlroy and what she might ask him.

“But I forgot everything,” she said.

Saso went to the driving range to seek out McIlroy only to learn he was already on the course. She saw PGA Championship winner Phil Mickelson among others.

“I saw Phil activating his calves, and I saw Jordan Spieth. I saw the great players,” Saso said.

Then she found him on the famed Torrey Pines layout.

“He let me go inside the ropes. That was really great,” Saso said. “I talked to him about things. I can’t share it with you guys. I want to keep it with me.

“He said I swing it good. Maybe I can ask him someday about any tips about my swing. I only followed him for three holes, and I didn’t really want to bother him. It’s a very important tournament.

“Maybe someday if he has the free time, if we can talk maybe more, then I will ask him.”

The McIlroy meeting is part of a whirlwind tour for Saso since her major triumph.

“It has been great, busy at the same time,” she said. “It has been surreal. I just enjoy it.”