Journal News / Mysterties / What Does Science Say About Flying and Fire Breathing Dragons? 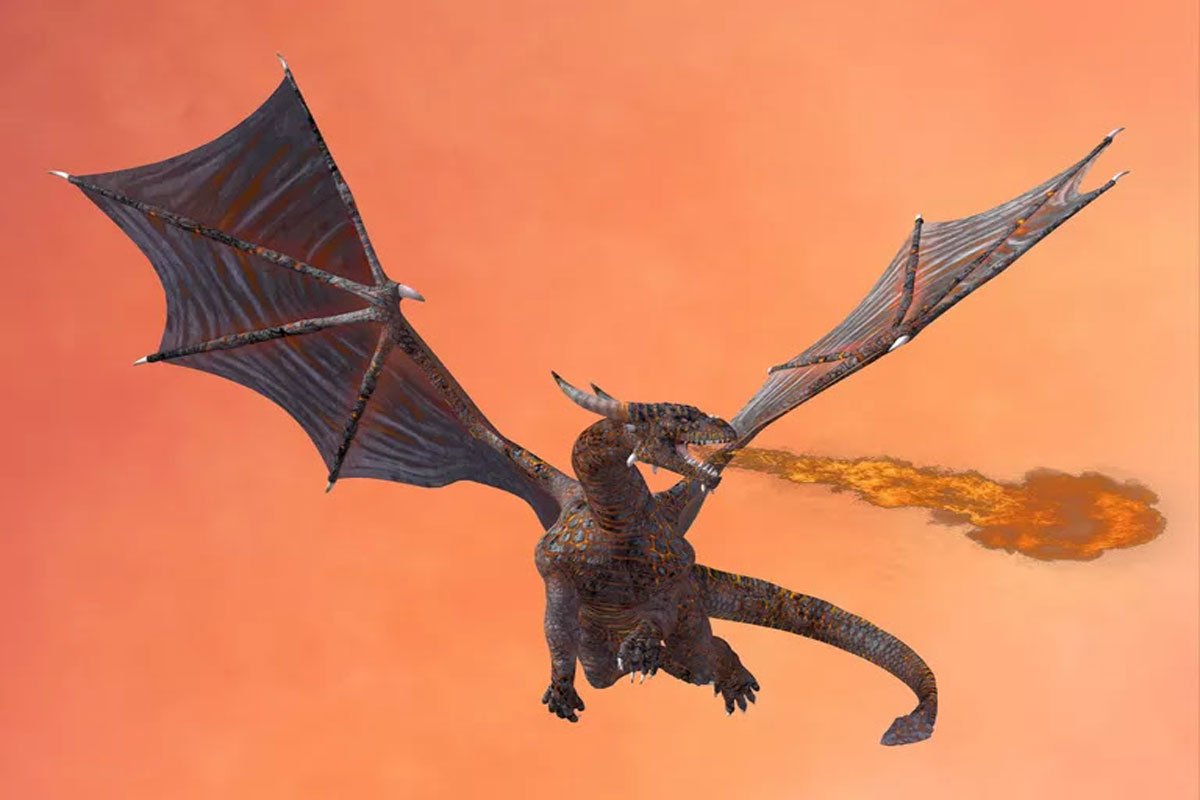 What Does Science Say About Flying and Fire Breathing Dragons?

Believe it or not, real-life flying and fire-breathing dragons are possible 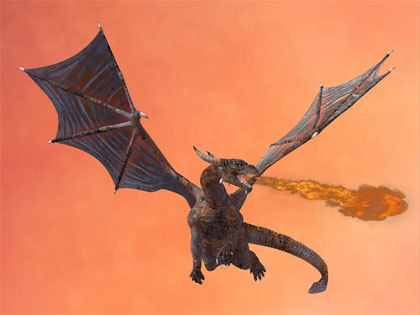 In myth, many dragons can fly and breathe fire.

You’ve probably been told dragons are mythical beasts. After all, a flying, fire-breathing reptile could never exist in real life, right? It’s true no fire-breathing dragons have ever been discovered, yet flying lizard-like creatures exist in the fossil record. Some may be found in the wild today. Take a look at the science of winged flight and possible mechanisms by which a dragon might even breathe fire.

How Large Could a Flying Dragon Be? 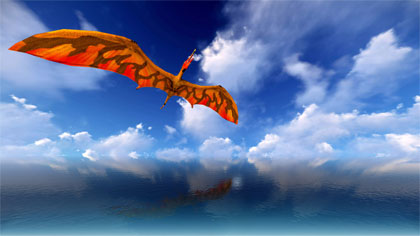 Quetzalcoatlus had a wingspan of around 15 meters and weighed about 500 pounds.

Scientists generally agree modern birds descended from flying dinosaurs, so there isn’t any debate about whether dragons could fly. The question is whether they could be large enough to prey on people and livestock. The answer is yes, at one time they were!

The Late Cretaceous pterosaur Quetzlcoatlus northropi was one of the largest known flying animals. Estimates of its size vary, but even the most conservative estimates place its wingspan at 11 meters (36 feet), with a weight of around 200 to 250 kilograms (440 to 550 pounds). In other words, it weighed about as much as a modern tiger, which can certainly take down a man or goat.

There are several theories about why modern birds aren’t as large as prehistoric dinosaurs. Some scientists believe the energy expenditure to maintain feathers determines size. Others point to changes in the Earth’s climate and atmospheric composition. 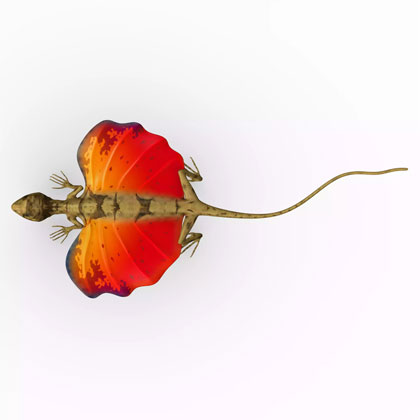 Draco is a small flying dragon found in Asia.

While dragons of the past may have been large enough to carry off a sheep or human, modern dragons eat insects and sometimes birds and small mammals. These are the iguanian lizards, which belong to the family Agamidae.

Draco spp. are flying dragons. Really, Draco is a master of gliding. The lizards glide distances as long as 60 meters (200 feet) by flattening their limbs and extending wing-like flaps. The lizards use their tail and neck flap (gular flag) to stabilize and control their descent. You can find these living flying dragons in South Asia, where they are relatively common. The largest only grows to a length of 20 centimeters (7.9 inches), so you don’t need to worry about being eaten.

Dragons Can Fly Without Wings 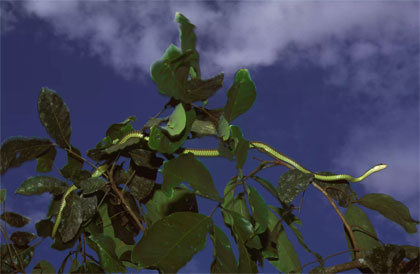 The paradise tree snake (Chrysopelea paradisi) can glide a hundred meters from tree to tree.

While European dragons are massive winged beasts, Asian dragons are more akin to snakes with legs. Most of us think of snakes as ground-dwelling creatures, but there are snakes that “fly” in the sense they can glide through the air for long distances. How long a distance? Basically, these snakes can remain airborne the length of a soccer field or twice the length of an Olympic swimming pool! Asian Chrysopelea spp. snakes “fly” up to 100 meters (330 feet) by flattening their bodies and twisting to optimize lift. Scientists have found the optimal angle for a serpentine glide is 25 degrees, with the snake’s head angled upward and tail downward.

While wingless dragons couldn’t technically fly, they could glide a very long distance. If the animal somehow stored lighter-than-air gases, it might master flight.

How Dragons Could Breathe Fire 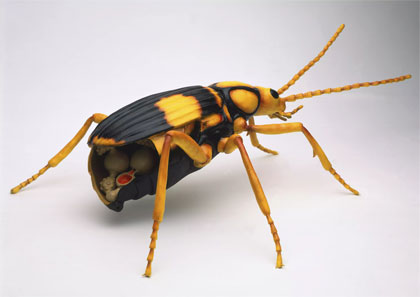 To date, no fire-breathing animals have been found. However, it wouldn’t be impossible for an animal to expel flames. The bombardier beetle (family Carabidae) stores hydroquinones and hydrogen peroxide in its abdomen, which it ejects when threatened. The chemicals mix in the air and undergo an exothermic (heat-releasing) chemical reaction, essentially spraying the offender with irritating, boiling hot fluid.

When you stop to think about it, living organisms produce flammable, reactive compounds and catalysts all the time. Even humans inhale more oxygen than they use. Hydrogen peroxide is a common metabolic by-product.

Acids are used for digestion. Methane is a flammable by-product of digestion. Catalases improve the efficiency of chemical reactions.

A dragon could store the necessary chemicals until it’s time to use them, forcefully expel them, and ignite them either chemically or mechanically. Mechanical ignition could be as simple as generating a spark by crushing together piezoelectric crystals. Piezoelectric materials, like flammable chemicals, already exist in animals. Examples include tooth enamel and dentin, dry bone, and tendons.

So, breathing fire is certainly possible. It hasn’t been observed, but that doesn’t mean no species has ever developed the ability. However, it’s just as likely an organism that shoots fire might do so from its anus or a specialized structure in its mouth.

But That’s Not a Dragon! 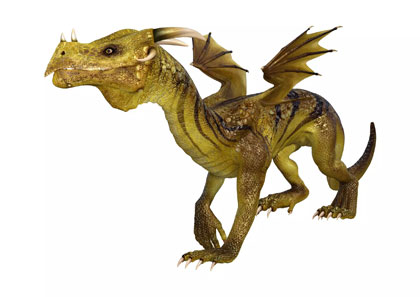 This dragon would require magic, not science, to fly.

The heavily armored dragon portrayed in movies is (almost certainly) a myth. Heavy scales, spines, horns, and other bony protuberances would weigh a dragon down. However, if your ideal dragon has tiny wings, you can take heart in the realization that science doesn’t yet have all the answers. After all, scientists didn’t figure out how bumblebees fly until 2001.

In summary, whether or not a dragon exists or can fly, eat people, or breathe fire really comes down to what you define a dragon to be.

Flying “dragons” exist today and in the fossil record. They are not merely fantasy beasts.

While wingless dragons wouldn’t fly in the strict sense of the term, they could glide long distances without violating any laws of physics.

Fire-breathing is unknown in the animal kingdom, but is theoretically possible. Many organisms produce flammable compounds, which could be stored, released, and ignited either by a chemical or a mechanical spark.