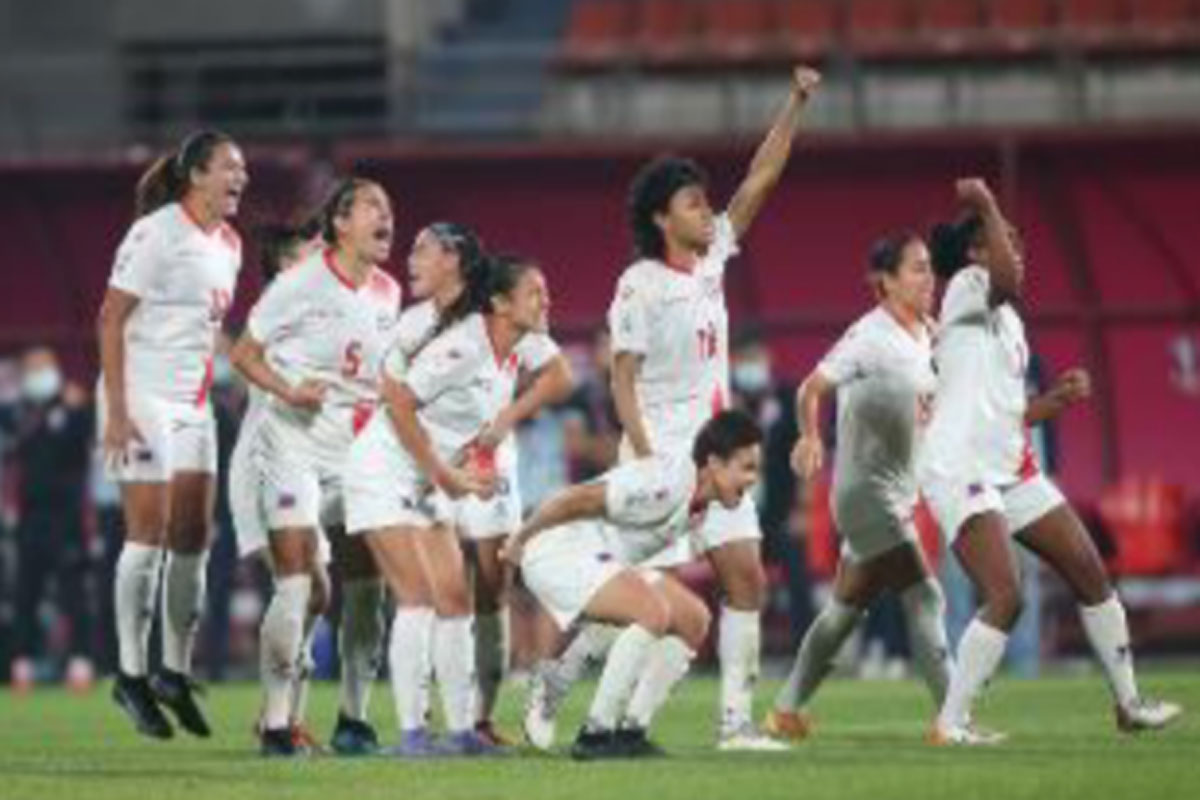 The 64th-ranked Filipinas are now in the FIFA Women’s World Cup. AFC photo
Other Sports,

AS the Philippines was the brink of missing the easiest route to advance to the FIFA Women’s World Cup, goalkeeper Olivia McDaniel displayed steely resolve to make history for the country.

Behind McDaniel’s heroics, the Filipinas achieved their ultimate goal of qualifying to the world’s biggest football showcase by defeating Chinese Taipei, 4-3, on penalties after their AFC Women’s Asian Cup quarterfinal showdown ended in a 1-1 stalemate in extra time late Sunday in Pune (early yesterday morning in Manila).

McDaniel produced two brillant saves and scored one in the highly-intense shootout, as the Philippines not only booked a berth in the FIFA Women’s World Cup for the first time ever, but it also secured an inaugural appearance in the semifinals of the continent’s biggest football competition.

On taking that fifth penalty kick that served as a make or break moment for the Filipinas, McDaniel was able to get the job done to force a sudden death.

“To be honest, I was more nervous to stop the PKs than to take the PK. No nerves when I step up to take a PK because I know it’s gonna go at the back of the net,” said McDaniel, the Laguna Beach, California-born keeper who hails from a family of football players.

The fans at home who stayed up late up to witness history on free TV, on the other hand, celebrated with tears of joy – a surreal moment for the once-underappreciated women’s football program in the country.

Alen Stajcic, the Australian coach who made things happen in a short span of time for the Filipinas, had all praises for McDaniel.

“She was exceptional. We’ve played 10 halves of football and she has conceded in only two of them. For her to step up to this level, she was taking the fifth penalty. That level of composure and bravery is unbelievable,” said Stajcic.

Quinley Quezada, coming off health and safety protocols, opened the scoring in the 49th minute before Zhuo’s 83rd minute equalizer set the stage for a grind-it out finish.

Visibly tired, both teams failed to score in extra time, sending to match to penalties.

In the semis, the Philippines will face South Korea, which stunned Australia, 1-0, in the quarterfinals, on Thursday afternoon in Pune.

Regardless of the result, the Filipinas are assured of their best finish in the historic run of gaining qualification to next year’s FIFA Women’s World Cup.

“It’s an unbelievable achievement by the group, and a moment in history for the country, you won’t be able to take that away from the group,” said Stajcic, who handled Australia for five years until 2019.

“For now, every young kid back at home in the Philippines can be inspired to get to the World Cup themselves. The group is really proud of each other, but they’re even more proud to inspire the next generation,” he added.

The 64th-ranked Filipinas, who held a two-month training camp in Irvine, California prior to their India sojourn, have accomplished a lot in the AFC Women’s Asian Cup.

The Philippines made new country records by scoring three victories, including a massive 6-0 win over Indonesia in the final day of the group stage and a stunning 1-0 conquest of Thailand that ended a 12-match losing streak against its fancied Southeast Asian rival.

Ranged against the Australians led by Chelsea standout Sam Kerr, the Filipinas surprisingly held their foes to a scoreless first-half before dropping a 0-4 decision.

Aside from the Philippines and South Korea, defending two-time champion Japan and eight-time winners China also sealed their places to the FIFA Women’s World Cup.

Despite the loss to the Koreans, the Australians have already qualified as co-hosts in the 2023 edition.